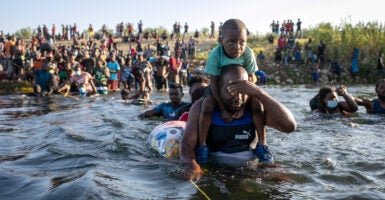 Would-be Haitian immigrants recross the Rio Grande back into Mexico from Del Rio, Texas, to Ciudad Acuna, Mexico, on Sept. 20. As U.S. immigration authorities began deporting some immigrants back to Haiti, thousands more waited in a ramshackle camp under an international bridge in Del Rio and others crossed the river back into Mexico to avoid deportation. Most, however, appear to have been allowed to move into the interior of the U.S. (Photo: John Moore/Getty Images) 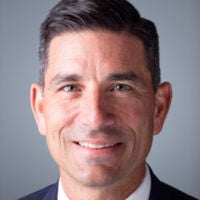 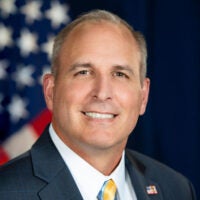 The Biden administration views the sudden gathering of 15,000 illegal immigrants under the Del Rio, Texas, international bridge over the past week to 10 days as an “optics problem.” In reality, Del Rio was a mere time-lapse photo of the open-border crisis happening along the southern border for the past eight months.

The administration has handled the Del Rio crisis terribly from the start, just as it has mismanaged border and immigration policies and operations since taking office.

Unfortunately, the damage to our country will be long lasting.

The administration ignored early reports that large groups of migrants were on the move as far south as Panama. The Department of Homeland Security should have been more proactive in monitoring the groups and working with Central American and Mexican officials to disrupt their movement.

Here in the U.S., Border Patrol agents in Texas sent warnings months ago that Del Rio was vulnerable and that more resources were needed or they would become overwhelmed.

Homeland Security leadership did not heed the warnings. As a result, the Border Patrol was overcome as migrants easily crossed the border illegally in numbers that rapidly rose from 4,000 to 8,000 to 15,000 in just a few days.

Thankfully, a persistent reporter, Bill Melugin with Fox News, and his team collected and aired video of the amassing group using a drone over the bridge.

The images were shocking and created such bad optics for the Biden administration that the Federal Aviation Administration concocted a temporary “security” ban on drone usage at the bridge.

Americans watching were highly skeptical of the sudden FAA ban. Undeterred, Melugin boarded a Texas Department of Public Safety helicopter and continued recording and airing the video of masses gathered beneath the bridge trying to escape the 100-plus degree heat and sun.

The FAA withdrew its drone ban by the end of the day.

Reporters logically asked White House press secretary Jen Psaki whether the illegal aliens amassed under the bridge in squalid conditions were being tested and/or vaccinated for COVID-19, especially when the White House just announced that all foreign nationals flying to the U.S. must show proof of vaccination to enter the country.

Psaki answered that the Del Rio illegal aliens were only tested for COVID-19 if they showed symptoms and seemed to make up an illogical justification; namely, it was because “they are not intending to stay here for a lengthy period of time.”

The illegal immigrants making the journey to illegally come to the U.S. time their trip based on likelihood of success, spend their life savings to do so, and endure hell along the journey here, walking for weeks, and being brutalized by traffickers. Of course they plan to stay here forever.

Administration officials are lying to the American people about the mass illegal immigration that is occurring.

A visible indicator that these illegal aliens intend to stay permanently are the photographs of the ditched documents from Chile and other countries where many of these Haitian migrants were already resettled for years.

Wanting to shed evidence of pre-existing protection in a third country, these illegal aliens will claim they just came from Haiti and cannot return there due to the possibility of persecution. Safe resettlement elsewhere first makes them ineligible for asylum in the U.S. Pursuing asylum anyway is fraud and should be denied.

The deteriorating Del Rio conditions were bad enough to cause Homeland Security Secretary Alejandro Mayorkas to fly down to the border. Despite seeing for himself how overwhelmed the Border Patrol agents and Texas Department of Public Safety officers were, he continued to direct Americans to ignore their lying eyes and claimed “the border is closed.”

Meanwhile, agents and contractors worked to transport the illegal aliens to other locations, to either return them to Haiti or, more often, release them into the U.S. The migrants attacked the agents, commandeered buses to escape, and reportedly bit agents to avoid deportation to Haiti.

Senators asked Mayorkas for the numbers of Del Rio illegal aliens deported or processed into the U.S. He claimed not to have them. Members of Congress asked again the next day. He gave the same implausible answer.

He complained that he’s working 18-hour days, which should have been plenty of time to ask Customs and Border Protection and Immigration and Customs Enforcement for the data. They collect it daily.

Reporters asked Psaki for the numbers. She referred them to the Department of Homeland Security, but implied that most Haitians are being deported.

Psaki continues to mislead the America people by intentionally masking the truth behind convoluted jargon such as “removal proceedings” when referring to what the Department of Homeland Security is doing with illegal aliens, suggesting they are being deported when she knows they are in fact being released into the U.S.

Approximately 3,000 to 5,000 of the 15,000 have been deported or are expected to be expelled, but the remaining 10,000 to 12,000 illegal aliens, made up of families, unaccompanied children, and any woman claiming to be pregnant will be released into the U.S.

Administration officials don’t ever mention their mass catch-and-release operations. The truth is, the administration is releasing numbers of illegal aliens the size of this Del Rio group into the interior every week. This was not a one-time event.

What do the Biden administration and the left want to talk about? Another lie they made up, about Border Patrol agents on horseback used “whips” (reins) to attack Haitians illegally crossing the border.

Despite clear video and photos that show this to be false, the White House is running with this lie to deflect from its self-made border crisis. This not only demonstrates the left’s instinct to blame law enforcement, it also reveals the left’s evilness in wrongly punishing law enforcement agents for doing their jobs in impossible situations created by the left themselves.

The administration placed the agents on administrative leave and prohibited use of horses in Del Rio until at least their pointless investigation is complete.

Supposed border czar Vice President Kamala Harris suddenly spoke about the border crisis, only to attack her own law enforcement agents. Democrats in Congress are using terms like “slavery” and (their favorite) “white supremacists,” dog whistles that show they do not want to solve this crisis.

The Border Patrol agents have been abandoned, scapegoated, and thrown under the bus by their own departmental secretary and now, vilified by the president of the United States. They have been condemned, had careers ruined, and had reputations irreparably harmed in an effort to deflect from the out-of-control catastrophic crisis at our southern border.

Meanwhile, the White House ordered the Del Rio bridge area to be cleared out in advance of a nearby Black Lives Matter protest this weekend. They wouldn’t want things to look bad.

This week in Del Rio was just a peek into the 2021 border catastrophe. The images of large numbers of illegal aliens under the bridge have been an annoyance to the Biden White House. They will do what they always do with self-inflicted crises—lie, blame someone else, wait it out, and distract with something new.