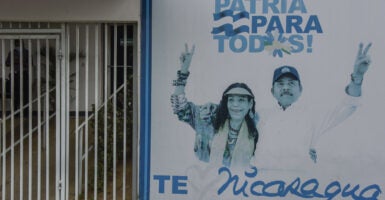 In recent months, Nicaragua’s brutal and longtime dictator-president, Daniel Ortega, and his wife and vice president, Rosario Murillo, have plunged the Central American nation into an unprecedented human rights and political crisis—just hours south of the U.S. border. So far, the Biden administration’s response has been weak.

Elected with just 38% of the vote in 2006, Ortega and his wife have systematically deconstructed democracy in Nicaragua with the financial aid of Venezuelan strongmen Hugo Chavez and Nicolas Maduro. They seized control of all branches of government, established a police state, conducted sham reelections, and eventually changed Nicaragua’s Constitution to permit Ortega to remain in power for life.

Simply put, in their quest for absolute and never-ending power, the “Or-Mu” regime is waging war on the Nicaraguan people.

In the run-up to another sham reelection in November, the regime has arrested 36 opposition and civil society leaders on trumped-up charges just since May of this year.

Among those imprisoned are five of the seven major opposition presidential candidates (the other two are under house arrest), along with other detained students, reporters, business leaders, religious leaders, and activists.

During a recent discussion at a Heritage Foundation public event, the wives of two of the imprisoned candidates said that their husbands have been subjected to psychological and physical torture due to deprivation and inhumane treatment. (The Daily Signal is the news and commentary platform of The Heritage Foundation.)

Since 2018, the regime has unlawfully detained over 150 political prisoners.

Appallingly, among the political prisoners was U.S. citizen and Navy veteran Eddy Montes, who was assassinated in a Managua prison in 2019.

And what has been the response of the Biden administration? It has scolded the regime through some press releases and tweets.

In a more proactive move, the Treasury and State departments took steps to add individual names to the sanctions list maintained by the Office of Foreign Assets Control, and to block the visas of over 100 regime officials and family members following the arrests of the opposition candidates in June.

The Biden administration has sent mixed messages, however, as can be seen in an upbeat-sounding announcement from the Commerce Department to promote an event in January 2022 on U.S. business and investment opportunities in Nicaragua.

More significantly, as The Wall Street Journal has noted, the Biden administration has quietly enabled what will amount to a multimillion-dollar cash bonus for the criminal regime in Managua.

Following a shift in global U.S. policy that could not have arrived at a more convenient time, the Or-Mu regime will soon gain access to hundreds of millions of dollars in special drawing rights from the International Monetary Fund as part of a massive, U.S.-supported expansion of unconditional (and never-to-be-repaid) lending to fund members.

Special drawing rights are reserve assets assigned by the International Monetary Fund to its member countries, based on quotas, and can be converted into hard currency. As The Heritage Foundation has reported, the overwhelming majority of these special drawing rights will be converted into dollars and will ultimately levy a cost on American taxpayers.

When asked about this issue, the Biden administration claimed to be opposed to new lending to the Or-Mu regime. However, the new allocation of special drawing rights to International Monetary Fund members, which include Nicaragua, was achieved only with the support of U.S. Treasury Secretary Janet Yellen. This decision reversed the last administration’s opposition to a huge expansion of special drawing rights since, as is now evident, they would be made accessible to malign foreign adversaries like China and Iran (and Nicaragua).

Nicaragua’s allotment is a whopping $249 million of special drawing rights, which The Wall Street Journal reports is equivalent to $354 million. The International Monetary Fund does not recognize the socialist Maduro regime, and therefore, Venezuela is blocked from receiving the new special drawing rights. Nicaragua is still recognized as an International Monetary Fund member, so the Ortega-Murillo regime retains full access to the new funds.

Overall, in the years since Ortega’s return to power in 2007, Nicaragua has recorded a steady decline in economic freedom, according to The Heritage Foundation’s Index of Economic Freedom. In particular, the Nicaraguan economy has contracted every year since 2017.

Moreover, the undeserved International Monetary Fund’s funding will be delivered despite reports that the Or-Mu regime has misrepresented Nicaragua’s recorded COVID-19 infection numbers and has harassed Nicaraguan doctors with accusations of “health terrorism” for warning that the real numbers are far worse than those reported in official statistics.

Ahead of Nicaragua’s Independence Day celebration Sept. 15, U.S. Secretary of State Antony Blinken issued a statement condemning the crackdown on political freedom and civil society in Nicaragua and reaffirming that “the U.S. stands with all those speaking truth to power, defending human rights, and strengthening democratic institutions.”

But if the Biden administration is serious about acting on its words, its policy should be focused on formulating tough measures that will be costly to the Ortega-Murillo regime.