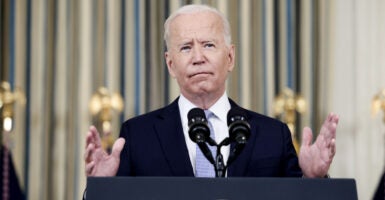 "We’re going to pay for everything we spend," President Joe Biden tells reporters Friday of Democrats' $3.5 trillion spending bill during a press conference in the State Dining Room of the White House. (Photo: Anna Moneymaker/Getty Images)

President Joe Biden expressed confidence Friday that Congress will pass both a $3.5 trillion spending bill and a $1.2 trillion infrastructure bill, although the more expensive measure is backed only by his fellow Democrats.

Biden is facing a divided party as more centrist Democrats from purple and red states express concern about the price tag of the $3.5 trillion spending bill, which is largely a wish list from progressives that is filled with “free” programs.

The president, speaking in the State Dining Room of the White House, appeared uncertain about the final cost as he seemed to wander from the topic. But he said the government can cover the trillions in costs.

“We talk about price tags. It is zero price tag on the debt,” Biden said. “We’re paying, we’re going to pay for everything we spend. So they say it’s not, you know, people, understandably, well, you know, it started off at $6 trillion, now it’s $3.5 trillion. Now it’s—is it going to be $2.9? Is it—it’s going to be zero, zero.”

Paying for the spending will come through tax hikes on the wealthy, Biden said, including “trillionaires.”

It’s not clear whether trillionaires actually exist. Jeff Bezos, founder and owner of Amazon, reportedly is the wealthiest person in the world with a net worth of $177 billion. That’s well short of $1 trillion.

“I’m tired of trickle-down. The trillionaires and billionaires are doing very, very well—you all know it; you’ve all reported it, and in the middle of this [COVID-19] crisis,” the president told reporters.

Members of the House Progressive Caucus are threatening to torpedo the bipartisan infrastructure package that includes roads, bridges, and broadband if they don’t also get the $3.5 trillion spending bill.

House Speaker Nancy Pelosi, D-Calif., reportedly will bring the less expensive infrastructure bill to the floor next week for a vote. Democrats agreed to a framework deal to pay for the massive spending bill, which includes many social and environmental programs.

The House has 220 Democrats and 212 Republicans. The Senate is split 50-50, with two liberal independents caucusing with Democrats and Vice President Kamala Harris’ tie vote giving the technical majority to Democrats.

“It wasn’t until people were forced to look at: What are you for? Are you for taking care of that highway or bridge in your state or that region—in your region?” Biden told reporters, adding later: “I find that they’re going, ‘Huh, I never really thought that through before. I think it makes sense.’”

Biden went on to talk about the meetings among Democrats held at the White House.

“Both meetings went very well. I mean, it was—it was—they were collegial,” Biden said. “It—it wasn’t—no one was hollering.  Everybody was—you know. And people were hanging out afterwards in the Oval, and—anyway—both the progressives as well as the—the moderates.”

“I saw a CNN headline [saying], GOP and Dems clash. There is no clashing going on right now,” Rep. Kat Cammack, R-Fla., said during a Republican Study Committee briefing for reporters earlier this week. “It’s actually within the Democratic conference where they are clashing right now. I ran into one of those moderates in the elevator today [who] said, ‘I never thought I’d see the day when I was getting so much hatred from my own party.’”

Rep. Brad Wenstrup, R-Ohio, had a similar story at the Tuesday RSC briefing.

“Just this morning, a Democrat colleague, I ran into him and he introduced me to his wife. He said to his wife, ‘This is Dr. Wenstrup. He is one of the more commonsense people we have here in the Congress. But I can’t vote for any of your stuff because I’m not allowed.’ He said, ‘I’m not allowed.’”