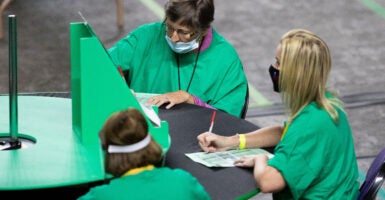 However, the election audit in Maricopa County did find procedural problems such as duplication of ballots and potential for fraud. Auditors recommended that the state address these issues to avoid questions in future elections.

The state Senate released the findings during a hearing Friday afternoon, but the 110-page, three-volume draft of the election review first was reported late Thursday by The Arizona Republic.

In some ways, the audit proved as controversial as the disputed presidential election. But it potentially closes a chapter in one of the most closely contested states.

Those results flipped the long-time red state to blue for the first time since 1996.

Here are six big takeaways from the audit’s findings.

The bottom line of Cyber Ninjas’ election audit is that it confirms Biden’s victory in Maricopa County.

Arizona Senate President Karen Fann, leader of the Republican majority, previously had said she didn’t anticipate the audit would find widespread fraud and that it couldn’t change the certified outcome.

“As you know, somebody leaked one of the draft reports out over the last 24 [to] 48 hours. It was a draft report, so I can tell you that is not entirely what’s in the final report,” Fann said Friday at the hearing.

The draft report notes that the audit findings generally were close to the initial ballot count by Maricopa County officials.

“On the positive side, there were no substantial differences between the hand count of the ballots provided and the official canvass results for the county,” the draft audit report said. “This is an important finding because of concerns ahead of the audit.”

Fann compared the audit’s factual findings to partisan attacks on the audit by Democrats, including Secretary of State Katie Hobbs, who runs elections in Arizona.

“What was also leaked, the first thing that is out there, said that ‘Oh look, the ballot counts were close to what Maricopa County reported.’ And that is a true statement,” Fann said Friday, adding:

They were close. Now I find it ironic that our secretary of state [Hobbs] and a few others have called this a sham audit, that you can’t trust it, you can’t believe it. Well, the interesting fact is that truth is truth. Numbers are numbers. We said that from Day One. What you are going to see is the truth. Those numbers were close, within a few hundred [votes].

Some critics had faulted Cyber Ninjas because the company wasn’t certified by the U.S. Election Assistance Commission for auditing elections and because its CEO, Doug Logan, had tweeted his suspicions about the legitimacy of the 2020 election.

However, the cybersecurity company’s review of 2.1 million ballots did not produce a favorable outcome for Trump, who has insisted the election was rigged in multiple states that he lost.

Trump and some Republican supporters have pushed for similar forensic audits of the voting in Wisconsin, Georgia, and Pennsylvania, also close battleground states that Biden won by relatively tight margins.

Arizona was a key state in the general election. In February, a Washington Post analysis found that flipping about 43,000 votes across Arizona, Georgia, and Wisconsin could have changed the Electoral College outcome that gave Biden the presidency over Trump.

The audit also confirmed the victory of Mark Kelly, a Democrat, over incumbent Martha McSally, a Republican, in the state’s U.S. Senate race.

Fann, president of the state Senate, said the heavy media coverage of the draft audit report didn’t include some core points.

“What you have not seen and not heard yet, which is what you are going to hear right now, is about the statutes that were broken, how the chain of custody [for ballots] was not followed, how we had a number of issues, which is why people questioned the ballots in the elections,” she said.

Auditors also raised concerns about potential duplicate voters, with names and birth years appearing more than once on some ballots.

Shiva Ayyadurai, an engineer, made a separate PowerPoint presentation Friday to explain the duplication and signature issues. A former Republican political candidate in Arizona, Ayyadurai was hired by Cyber Ninjas because of his training in pattern recognition.

3. What Trump Had to Say

Trump issued two statements ahead of the official release of the Arizona audit report that focused on the shortcomings of election procedures and sharply criticized conclusions that Biden won the state.

“Huge findings in Arizona! However, the Fake News Media is already trying to ‘call it’ again for Biden before actually looking at the facts—just like they did in November! The audit has uncovered significant and undeniable evidence of FRAUD!” the 45th president said in his first statement Friday, adding:

Until we know how and why this happened, our Elections will never be secure. This is a major criminal event and should be investigated by the Attorney General immediately. … I have heard it is far different than that being reported by the Fake News Media.

Trump’s follow-up statement later Friday focused on fraudulent votes, which he said were at least four times larger than the margin of Biden’s victory.

“The Fake News is lying about the Arizona audit report! The leaked report conclusively shows there were enough fraudulent votes, mystery votes, and fake votes to change the outcome of the election 4 or 5 times over,” Trump said in the public statement, adding:

The number includes 23,344 mail-in ballots, despite the person no longer living at that address. Phantom voters! The official canvass does not even match who voted, off by 11,592—more than the entire Presidential Election margin.

Voters who voted in multiple counties totaled 10,342, and 2,382 ballots came from people who no longer lived in Maricopa County. There were also 2,592 ‘more duplicate ballots than original ballots.’ Just those fraudulent ballots alone total 50,252, and is fraud many more times than the so-called margin of ‘victory,’ which was only 10,457.

In addition, election data appears to have been intentionally deleted, and ballot images were ‘corrupt or missing.’ This is not even the whole state of Arizona, but only Maricopa County. It would only get worse!

There is fraud and cheating in Arizona and it must be criminally investigated!

After the hearing convened, Trump issued a third statement, saying:

CNN, New York Times, Washington Post, and other Lamestream Media are feeding large-scale misinformation to the public about the Arizona Audit. The Audit was a big win for democracy and a big win for us. Shows how corrupt the Election was. Arizona State Senate hearing going on now and the information about what took place is terrible—a bigger Scam even than anticipated!

Trump released three more statements on this topic Friday evening within 10 minutes. In his sixth statement, Trump promised that he would have more to say when he speaks in another closely contested state.

“I will be discussing the winning results of the Arizona Forensic Audit, which will show 44,000 possibly illegal ballots cast, tomorrow at the Great State of Georgia rally, which will be packed!” Trump said.

Maricopa County officials pronounced vindication in the audit’s final conclusion, but still expressed concerns with some of the findings.

“You don’t have to dig deep into the draft copy of the Arizona Senate/Cyber Ninja audit report to confirm what I already knew—the candidates certified by the Maricopa County Board of Supervisors, Governor, Secretary of State and Attorney General—did, in fact, win,” Maricopa County Board Chairman Jack Sellers, a Republican and the county’s top elected official, said late Thursday in a public statement.

“This means the tabulation equipment counted the ballots as they were designed to do, and the results reflect the will of the voters,” Sellers said. “That should be the end of the story.  Everything else is just noise.”

In a series of statements Thursday, Maricopa County’s official Twitter account asserted: “Cyber Ninjas confirms the county’s canvass of the 2020 General Election was accurate and the candidates certified as the winners did, in fact, win.”

The county also tweeted: “Unfortunately, the report is also littered with errors & faulty conclusions about how Maricopa County conducted the 2020 General Election.”

Finally, it said: “Board members & election officials will pay close attention to what is said at Friday’s scheduled Senate hearing & share facts as needed.”

5. How Much It Cost and Who Paid

The Maricopa County election audit wasn’t cheap, but Arizona taxpayers didn’t have to foot the entire bill because Trump supporters donated to the effort.

The Arizona Senate will pay $150,000 to Cyber Ninjas and also about $60,000 for security and $50,000 for analysis of ballot envelopes, The Wall Street Journal reported.

Maricopa County also has sued the state to replace voting machines used in the audit, saying it would cost the county $2.8 million to replace the machines.

Most of the money that paid for Cyber Ninjas’ audit—$5.7 million—came from private donors, the Journal reported.

“The accusation is that because it was paid for by outside sources it is automatically dubious or cannot be trusted because of the potential desire of the auditors to do what the funders want,” Cyber Ninjas spokesman Rod Thomson told the Journal.

“But how is that logic any different from the government paying for an audit of a government-run election?” Thomson asked. “In that case, you have the same potential desire for auditors to do what the government funders want, because you want to be hired again.”

A reporter asked White House press secretary Jen Psaki on Friday whether the White House had any comment on the audit’s findings that Biden actually won more votes in Arizona and Trump won fewer.

“It confirmed what we have all known for some time and what millions and millions of people in the country know,” Psaki said.