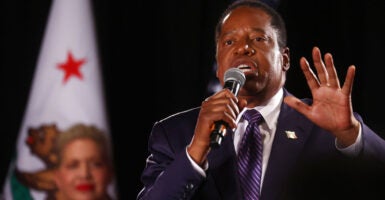 I want to thank the distributor of my articles, Creators Syndicate, for allowing me to take eight weeks off from writing my weekly column so I could campaign to recall and replace the governor of California. I also want to thank my readers for their patience and willingness to let me pursue that adventure.

The recall required 50% plus one of the votes be cast in favor of the recall. To replace required only that the replacement candidate receive more votes than any other candidate. Right now, ballots are still being counted, but the effort to recall Gov. Gavin Newsom has failed.

Question two, who do you want to replace him? For question No. 2, they were over 40 names. I finished first, by far, with more than 47% of the replacement votes. My closest competitor received 10%.

I entered the race late and campaigned for nearly eight weeks. One Republican rival, a two-term mayor of San Diego, campaigned a full year and got less than 9%. It appears that I raised more money than my Republican rivals combined—with the exception of a multimillionaire who pretty much self-funded.

As expected, the left-wing media were ruthless. A columnist in the Los Angeles Times called me “the black face of white supremacy.” Only in America can a black person become president or a white supremacist.

Had Newsom been recalled, this would’ve been the second time Californians voted to recall their governor. But the electoral landscape the first time this happened in 2003, compared with today, is very different.

Between 2003 and 2021 there are 5% more registered Democrats, 50% more registered independents—who tend to vote for Democrats—and a whopping 33% fewer Republicans. To call an effort to recall a Democratic governor an uphill battle is a massive understatement.

In 2021, as Newsom faced a recall, registration was:

Newsom’s record as governor since 2019 is flat-out abysmal. During the first eight months of the coronavirus pandemic, Newsom oversaw the early release of 18,000 convicted felons. Crime is up dramatically.

Homelessness is also up dramatically. When Newsom ran for mayor of San Francisco in 2004, he promised to end that city’s homelessness problem in 10 years. Have you been to San Francisco lately?

The quality of public education in California is abysmal. Despite spending an estimated $20,000 per student per year, according to the California Policy Center, California’s public school students’ test scores rank near the bottom of all 50 states.

Before the pandemic, 67% of fourth-grade public school students could not read at National Assessment of Educational Progress levels of proficiency. The math scores are even worse.

Black and Hispanic parents in urban areas want school choice—the right to use the education money to put their student in a charter school, private school, religious school, or to use the money for homeschooling—but Newsom and the teachers unions oppose true school choice.

California is facing a water shortage and experiencing “rolling brownouts” because of the failure to properly invest in our energy grid, and our fires are becoming increasingly more severe, in part because of Newsom’s poor forest management.

So, why did the recall fail? More on this next week.

This article has been corrected to reflect how many years Gavin Newsom has served as governor of California.