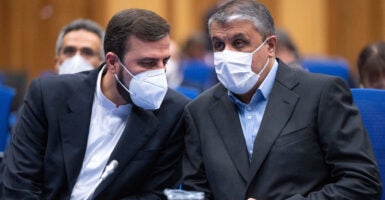 In fact, the Institute for Science and International Security estimates the “breakout” time needed for Iran to produce enough fissile material for a single nuclear bomb could now be as little as one month.

Two more bombs could be built in as little as five months.

Indeed, the Iranian regime is turning the heat up on the Biden administration and the stalemated negotiations to revive, reconfigure, or even replace the flawed, Obama-era, eight-party Joint Comprehensive Plan of Action.

The 2015 Joint Comprehensive Plan of Action—also known as the Iran nuclear deal—is essentially a negotiation between the U.S. and Iran, but also involves Britain, France, China, Russia, Germany, and the European Union as the principal parties to the agreement as well as the new negotiations.

Other harrowing highlights of the International Atomic Energy Agency document reportedly include, according to the Institute for Science and International Security’s reporting, the following:

While all of this is bad news and seemingly a good reason to panic, Iran still isn’t believed to be able to conduct a nuclear test or build a viable nuclear device for mating with a delivery platform such as a missile or an aircraft.

Like nuclear testing, developing a nuclear warhead is a significant scientific and engineering feat.

The weapon must be miniaturized to fit inside a gravity bomb or a missile warhead. In the case of a missile, the warhead must be able to survive flight en route to its target despite vibrations, G-force pressures, and high temperatures.

Fortunately, Iran isn’t there yet.

Of course, that’s small comfort considering the robustness of Iran’s missile program, which can currently range all of the Middle East, including Israel, and its intercontinental ballistic missile aspirations as evidenced by it “not so civilian” space program.

Shockingly, the ballistic missile program—the most likely platform for delivering a nuke—was never included in the Obama-Biden Joint Comprehensive Plan of Action.

Since the Joint Comprehensive Plan of Action doesn’t allow monitoring of all potential nuclear sites and Tehran has hindered the International Atomic Energy Agency’s surveillance of its nuclear program since February, who knows what else is going on in Iran’s nuclear programs?

Indeed, the mullahs have also never come clean on the full extent of its nuclear program to the International Atomic Energy Agency as was expected.

Right now, Washington, D.C., is waiting for Tehran’s new government to fully form and possibly return to the bargaining table to discuss the flawed nuclear deal, which the U.S. exited in 2018 due to its numerous shortcomings.

All of Iran’s agreement-busting atomic acts are meant to shake the White House with nightmarish visions of Iran joining the roguish North Korean regime, which now has a threatening nuclear arsenal.

These Persian provocations are a form of nuclear brinkmanship and blackmail that accrue added diplomatic leverage to Iran at the negotiating table, increasing pressure on the U.S. to make big concessions on any future nuclear deal.

While Tehran insists that it only has interest in a peaceful nuclear program, its nuclear and missile programs tell quite a different story—a fairy tale narrative the Biden administration shouldn’t buy into.