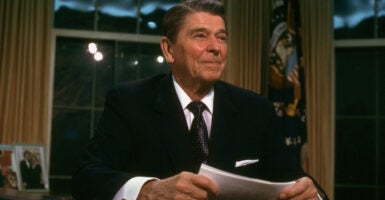 In 1987, as president, Reagan stood on a stage at the Kiwanis International National Convention and said that “freedom is never more than one generation away from extinction.”

To this day, Reagan’s warning is repeated among freedom-loving Americans. But the question remains whether millennials, age 25-40, and Generation Z, age 9- 24, understand the need to fight for and defend freedom, both for themselves and future generations.

After all, the majority of those within these two younger generations were not even alive when Reagan was president.

“Reagan launched a conservative revolution at home and abroad by boldly advancing the cause of freedom,” Angela Sailor, vice president of the Feulner Institute at The Heritage Foundation, said Sept. 14 during the think tank’s virtual event “Does President Reagan Matter to Generation Z?”

“Reagan embodied the ideas of the American founding and applied them to the threats and challenges of his day, so surely conservatives can still learn from his example,” Sailor said.

In partnership with the Ronald Reagan Presidential Foundation and Institute, Heritage hosted the event to discuss what lessons rising generations of conservatives can glean from the 40th president.

Below are four reasons that, according to these authorities on Reagan, we can firmly answer that yes, we and our political leaders can learn a great deal from Reagan today.

Being a Unifying Voice

Reagan succeeded in uniting conservatives of all types, Shirley said.

For the first half of his life, Reagan was a Democrat. He became a Republican in 1962, at 51, just a few years before becoming governor of California and fewer than 20 years before being sworn in as president.

His political background, and even the religious influences of his Catholic father, contributed to the words he chose to use when speaking to the nation.

In his speeches, Reagan did not say “‘I, me, or ours’—he said ‘we, us, and ours,’” Shirley, who is also a Reagan biographer, said.

“Reagan always used the plural rather than singular, and that made him unique and different as a Republican in 1980 and allowed him to create a coalition with culturally conservative Democrats,” he added.

Through his ability to create unity, Reagan succeeded in fusing together the conservative base of both the Republican Party and the Democratic Party, Shirley said.

But Reagan didn’t use language alone to unite and mobilize conservatives across the country. He also provided direction.

Reagan sought to take power away from the federal government and restore it to the individual, Shirley said, adding that Reagan “was always about freedom.” His messaging on tax cuts, for example, didn’t focus on the economy but on restoring power to the American people.

But today, there “is no direction [for] the conservative movement,” Shirley said.

Although Reagan championed “maximum freedom consistent with law and order” and rallied conservatives around that vision, he said, the conservative movement today “seems to be just wandering in the desert.”

During his farewell address Jan. 11, 1989, Reagan told Americans that “we’ve got to teach history based not on what’s in fashion but what’s important.”

As conservatives seek to restore patriotism, turning to Reagan’s five-word litany “is the beginning of an answer,” he said.

Although Reagan challenged the nation to remember our history, Continetti explained, he was also unique as a conservative in his orientation toward the future.

The American people respond to political leaders who inspire us to shape the future, Continetti said.

Being an ‘Unflappable,’ Funny Candidate

Reagan presented himself as a steady leader and was “almost perfectly unflappable,” Continetti said, arguing that it was “very rare [that] anything got under his skin.”

By comparison, “the self” of politicians today “is spilled out—the self is everywhere,” both through social media and the so-called mainstream media.

Reagan likely would have an advantage in the world of social media today because he did not let anything get under his skin, Continetti said.

Americans were drawn to Reagan not only for his steadiness, but his humor, which Continetti said was “his secret weapon.”

When Reagan ran for reelection in 1984 at 73, he became the oldest candidate to seek the presidency. During his second debate with Democratic nominee Walter Mondale, then 56, Reagan was asked whether his age would hinder his ability to carry out his duties as president.

Reagan famously responded: “I will not make age an issue of this campaign. I am not going to exploit, for political purposes, my opponent’s youth and inexperience.”

The crowd, and Mondale himself, erupted in laughter.

Seeking ‘Peace Through Freedom With Strength’

If he were president today, Reagan would “first of all ask where the major ideological threats were to freedom in the world,” Nau said. “And I think his answer, without question, would be the authoritarian powers of Russia and China.”

Reagan would not have ignored other threats, Nau added, but he recognized that moving such powerful nations away from tyranny and toward ideological freedom would protect the freedoms of neighboring countries such as Ukraine and Hong Kong.

And given that America’s military is not as powerful today as it was in the 1980s, Nau said, Reagan likely would call on allies to do more in both security and economics.

Today, he argued, Reagan would challenge America to make every effort “to increase the domain of free countries who live in peace with one another, and diminish the domain of unfree countries, who are in fact the source of most of the threats in the international system.”