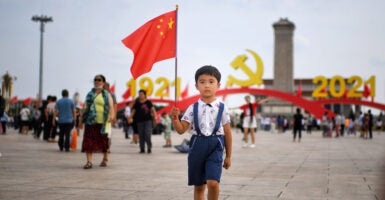 Revolutionary changes have been underway since President Xi Jinping came to power in 2012. Pictured: A child poses for photos in front of an art installation marking the 100th anniversary of the founding of the Communist Party of China at Tiananmen Square on July 2, 2021, in Beijing, China. (Photo: Hao Yi/Beijing Youth Daily/VCG/Getty Images)

Michael Cunningham is a visiting fellow in The Heritage Foundation’s Asian Studies Center.

Amid an already concerning “common prosperity” drive and crackdowns on a growing list of industries, Beijing recently released new rules to strengthen the government’s ideological oversight of the entertainment sector. Shortly thereafter, a post by a hitherto-obscure blogger claimed these developments constituted to a “profound revolution” against capitalists, the “worship” of Western culture, and “sissy-boy” celebrities. State-run media circulated the post widely, indicating at least some level of agreement with the rules within the Chinese government.

The incendiary post sent shockwaves through the Chinese and international business communities, which were already on edge due to the unprecedented intensity of the government crackdowns in recent months. Media speculation abounds regarding whether these developments do in fact constitute a revolution and what this will mean for businesses in China.

The word “revolution” might be confusing to the casual observer of China. While the word often connotes armed conflict or regime change in other contexts, in China, it usually refers to actions taken by the ruling Chinese Communist Party to change aspects of society and further strengthen its rule.

“Revolution” implies an all-of-government – even all-of-society – push to ensure the party’s success in its endeavor, and this is this is the kind of revolution at the center of the current debates. In fact, the blog post that sparked the controversy used the word almost interchangeably with another word—“transformation.”

While the scale and intensity of regulatory developments in recent months seem unprecedented, people should not be surprised by this turn in Chinese politics. Revolutionary changes have been underway since President Xi Jinping came to power in 2012, and even long before that. In fact, one of Xi’s first actions at the Chinese Communist Party’s helm was to launch an anti-corruption campaign which continues today, and is even more brazen than the newer campaigns that are unfolding.

While most of the other elements of China’s transformation under Xi have been gradual, they are no less significant. A simple comparison of the excesses and lax enforcement of pre-Xi China with the party-centric, high-tech security state Xi is assembling shows just how revolutionary this transformation has been.

While Xi’s leadership has accelerated the pace of change in China, contrary to much of the policy discourse in the West, he is not the architect of most of this change. In fact, many of the changes Xi has presided over began under his predecessors and were in the DNA of their one-party system from its inception. As uncomfortable as this perspective is for governments and businesses engaging with China, the Chinese Communist Party has always viewed itself as a Marxist revolutionary party.

Contrary to the narratives of most public commentary, even Deng Xiaoping, the godfather of China’s economic transformation, remained a committed revolutionary throughout his life. His market reforms did not signal an end to the struggle for communist revolution, but rather an acknowledgement of the failure of Mao Zedong’s efforts to leapfrog capitalism, which is considered by Marxist thought as a necessary step on the path to communism.

For the most part, China’s top leaders through the years have held firm to the party’s Marxist ambitions, even while they enabled capitalism to flourish as a means to this end. They made no secret about this—most in the West simply didn’t take their official pronouncements seriously.

Xi has also been consistently clear about his revolutionary ambitions. He has often shared his plans to transform China into a “great modern socialist country” by 2035 and achieve “national rejuvenation”—defined as being a “global leader in terms of composite national strength and international influence”—by the centenary of the founding of the People’s Republic in 2049.

No one outside the top ranks of China’s leadership knows exactly how each individual development fits into these ambitions. One cannot even rule out the possibility that the current crackdowns have more to do with political positioning ahead of next year’s party congress than long-term plans.

Regardless of how events play out, however, it is time for the business and policy communities to again get used to the idea that China is led by a party with a revolutionary mission, and that mission—not the opinions of business elites or foreign governments—drives how the party perceives national interests.

This does not mean Xi is preparing to release a new generation of red guards, foment armed revolutions abroad, or eliminate market forces and reintroduce a commune system. Xi is not Mao Zedong. While Mao routinely jeopardized China’s economic development and global prestige in the name of ill-conceived social experiments, Xi has tied his legacy to transforming the country into one of the wealthiest, most influential countries on earth while preserving the party’s monopoly on political power. This is the crux of his revolutionary objectives.

In order to succeed at his goals, Xi needs a robust private sector that is connected to international markets. He has repeatedly shown that he understands this. His economic point man Liu He last week echoed this understanding, pointing out that the private sector contributes more than 50% of China’s tax revenue, 60% of its gross domestic product, 70% of its technological innovations, and 80% of its urban employment.

Fears of a new “cultural revolution” are similarly unlikely to materialize, at least not in the form most imagine when considering the term. While Mao unleashed mass chaos to pursue his political goals, Xi thus far has taken the opposite approach. During his nine years at China’s helm, Xi has presided over one of the biggest clampdowns on civil society in history. Surveillance, regulation, law enforcement, and party discipline—not riots—are the routine instruments of party control under Xi.

While political desperation could eventually cause him to change course, the likelihood of such a development appears remote given Xi’s near-unprecedented grip on power.

Those seeking to understand where Xi is taking China should look to his governance record—what he and other senior leaders have said and done since he came to power – not the biggest failures of his most radical predecessor.

Rather than enforce ideological purity by copying Mao’s mass mobilization tactics and threatening the social stability the party works so hard to preserve, China’s leaders will continue to unleash police and regulators to ensure individuals and companies toe the party line.

Rather than declare war on all private capital, Beijing will continue to use regulation and crackdowns to force companies and sectors it deems a threat—whether economically or politically—to either fall into line or close down.

In executing these endeavors, Beijing will most likely take an increasingly hands-on approach to governing the private sector, but it is unlikely to attempt a broad takeover of private companies. A select few large or strategic businesses or sectors might be nationalized or forced to turn non-profit in order to further larger goals. However, the party’s preferred approach to exerting control over the private sector when regulation and enforcement are not enough will likely continue to be having state-owned firms purchase shares in private companies it deems particularly important or risky.

These may take the form of golden shares, as was recently reported to have happened to ByteDance. These measures will mainly target Chinese companies, but foreign businesses with close partners or joint ventures in key Chinese sectors could also be indirectly affected.

As Xi continues to transform China, it is important to bear in mind that he and the party are experimenting as they go. They will hit roadblocks along the way and in some instances will likely be forced to backpedal or place plans on hold to await more favorable conditions.

Indeed, Xi is overseeing an ambitious agenda, and some of his plans over the years have not proceeded as intended. This does not mean such plans will be abandoned, but rather that conditions were not yet right or unanticipated crises—such as the global pandemic—redirected the government’s attention elsewhere. Nevertheless, regardless of what delays or backtracking might occur, the overall direction the Party is taking China—toward tighter regulatory scrutiny and increasing party involvement in society and the economy—is unlikely to change.

A “profound revolution” has been underway since the founding of the People’s Republic. Compared to changes this revolution wrought in the last century, the current transformation is subtler, more incremental, and waged by regulators rather than militias or red guards.

As Beijing pursues its ambitions leading to 2049, politicians, business leaders, and investors should get used to the fact that crackdowns and tightening regulations are now a long-term feature of China’s economy. The new efforts to purify popular culture are just a manifestation of this trend.