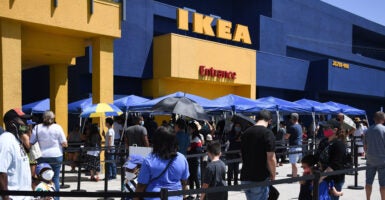 President Joe Biden says the handouts will “put more money in your pocket.” House Speaker Nancy Pelosi claims they will “protect the planet for the children.”

They might. But a disproportionate amount of the money will end up in the hands of big companies—the ones with the most lawyers and lobbyists.

A new documentary, “Corporate Welfare: Where’s the Outrage?” gives examples of this. This week, my new video covers two of the worst.

Memphis, Tennessee, has a program called the Economic Development Growth Engine, meant to entice new businesses to move to Memphis by giving them tax breaks.

“What about us?” asks Ron Becker, owner of The Great American Home Store. “We pay taxes here. Where is our financial incentive?”

Such tax breaks are complex, so it’s big companies with plenty of tax accountants that generally get them.

Memphis is “pitting these gigantic corporations who know the government and have tons of lobbyists against mom-and-pop shops in our community that we’re trying to save,” complains Mark Cunningham of the Beacon Center, Tennessee’s free market think tank. “You’re basically asking people to pay more tax dollars in order for their competitor to succeed over them.”

“These are our tax dollars,” he adds. “We work really hard for them. They should go to things we need: essential government services, roads, schools, police, fire. … It’s just not the role of government to give money to big corporations.”

“Such programs begin with good intentions,” documentary host Johan Norberg points out, “but they result in unintended consequences.”

He covers another handout with nasty unintended consequences: farm subsidies.

Fruit and vegetable farmers get no subsidies. There are no shortages of apples or pears. Crops do fine without subsidies.

“Only the big guys who have the resources” get subsidies, explains Mercatus Center economist Veronique de Rugy.

Some are not even American companies.

It’s worth spending $135 million to get billions in return.

By contrast, Jeff Hawkins spends nothing on lobbying.

Hawkins owns a farm in Indiana. He sells chicken to restaurant owner Pete Eshelman. The Indiana Legislature asked Hawkins and Eshelman to give a presentation on farmers markets and local restaurants.

When they finished speaking, Indiana politicians told them that selling chicken directly to restaurants is “illegal.” The Indiana Farm Bureau, State Poultry Association, and Pork Producers Association all testified in favor of banning direct farm-to-restaurant sales.

“They basically came up with a story that small farms processing chicken on the farm is a health risk,” complains Eshelman.

What really happened was that bigger, politically connected farms used the Legislature to ban competition.

But Hawkins’ chicken was popular. His customers complained on social media and flooded the phone lines of state representatives.

In a rare twist, the politicians gave in.

Now, says Norberg, “restaurants like Pete Eshelman’s can serve locally sourced poultry, and neighbors have a choice in the food that they eat.”

It was a small victory against America’s anti-freedom, pro-big business, welfare-for-the-rich regulations.