North and South Korea Just Test-Fired Missiles. Here’s What You Need to Know. 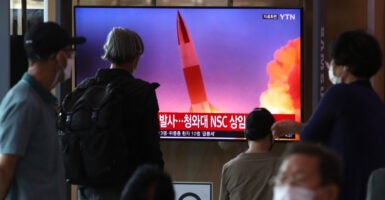 North Korea followed its weekend test launch of long-range cruise missiles by firing two ballistic missiles into the Sea of Japan on Wednesday. Shortly afterward, South Korea conducted another successful test of its submarine-launched ballistic missile. The nearly concurrent launches simply reflect continued missile development by both Koreas, but will likely be interpreted as responsive signals to each other.

In recent years, North Korea has developed numerous new missiles systems and accelerated their testing. In 2019, the regime unveiled five new missile systems as it conducted 26 missile launches, a new annual record—all of which were in violation of U.N. resolutions. In March 2020, Pyongyang launched nine short-range ballistic missiles, a new monthly record. The United States did not respond to any of those launches or those earlier this year.

South Korea has been developing a submarine-launch ballistic missile as one component of its overall defenses. The successful underwater launch makes South Korea the eighth nation in the world, including North Korea, with such a capability. Seoul’s announcement of the launch was the first official acknowledgement of the program. The missile has a conventional (rather than nuclear) warhead and an estimated range of 500 km.

The South Korean missile was fired from the domestically produced, 3,000-ton Dosan Ahn Chang-ho-class submarine. In August, South Korea conducted an underwater launch test from a submerged test barge followed by another launch from the submarine earlier this month. Seoul declared the missile will undergo further testing prior to actual deployment.

South Korea is developing the system as a survivable second-strike option in case of a North Korean attack. The system could target either North Korean leadership or missile targets.

By augmenting its strike capabilities, South Korea is making progress toward fulfilling one of the conditions for transferring the wartime operational command of its military forces from the United Nations Command to Seoul.

During the May U.S.-South Korean summit, the United States agreed to remove final restrictions on Seoul developing long-range missiles with heavier payloads. There have been several agreements since 1979 that incrementally removed restrictions.

After the bilateral summit agreement in May, Seoul announced it would develop land-based missiles “with significantly enhanced destructive power” to deter North Korea, including a missile with a 3-ton warhead.

North Korea uses U.S.-South Korean military exercises and Seoul’s augmentation of its military forces as justification for its repeated violations of U.N. resolutions. But Pyongyang continued augmenting its missile and nuclear forces despite Washington and Seoul canceling and reducing numerous military exercises during the past three years.

North Korea has so far refrained from the large-scale provocations it historically did in the first year of a new U.S. or South Korean administration. But it appears only a matter of time before Pyongyang conducts another intercontinental ballistic missile launch or nuclear test. Either would severely test U.S. leadership in the region.

The Biden administration should continue diplomatic efforts to negotiate with North Korea to reduce nuclear and missile threats. However, the United States and its allies should concurrently implement measures to enhance their deterrence and defense capabilities. Diplomacy and deterrence are not mutually exclusive.

To reassure its allies, the United States should reaffirm its extended deterrence guarantee to use all necessary force, including nuclear weapons, in response to a North Korean attack.

Washington should also pledge to maintain current levels of U.S. forces in the region until the North Korean nuclear, missile, and conventional force threats have been sufficiently reduced.