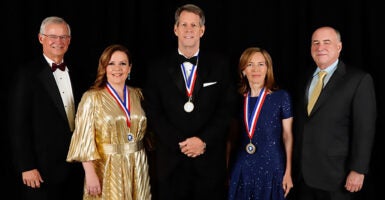 The Lynde and Harry Bradley Foundation, a philanthropic organization dedicated to that mission, presented the awards Monday night during a dinner and ceremony at the National Building Museum in Washington.

Shlaes is a noted biographer of Calvin Coolidge and author of the bestselling 2008 book “The Forgotten Man: a New History of the Great Depression.”

She also is a prolific journalist who has been published in outlets such as The New Yorker, The New York Times, The Washington Post, and National Review.

During her acceptance speech, Shlaes warned the audience that conservatives needed to reassess their approach to cultural issues.

“The other side has the cultural grace, the nuance, public radio … we have cultural anger,” Shlaes said. “That’s a poor trade … in culture, anger discredits you.”

Ream is president of The Fund for American Studies, a nonprofit focusing on educating young Americans and winning over “each new generation to the ideas of liberty, limited government, and free markets.”

Ream first joined The Fund for American Studies in 1991 as executive vice president; he became president in 1998.

He used his acceptance speech to extoll the values of American exceptionalism and liberty.

“We Americans are blessed to live in an exceptional country,” Ream said, adding:

We must never, even for a minute, take this for granted. For centuries, people have risked everything to come to America to live in freedom. Millions of men, women, and children of all races and religions still yearn to come here for a better life in our land of opportunity.

The night’s third and final award winner was Hemingway, senior editor of The Federalist and senior journalism fellow at Hillsdale College.

Hemingway is the co-author of the book “Justice on Trial: The Kavanaugh Confirmation and the Future of the Court,” about the media treatment of Brett Kavanaugh during his Supreme Court confirmation hearings in the Senate.

Hemingway urged conservatives to stand strong in their convictions, saying:

President [John] Adams was right that ‘Our Constitution was made only for a moral and religious people’ and ‘wholly inadequate to the government of any other.’ Lincoln was right to sacrifice everything for the sake of a government of, by, and for the people. These truths remain important, which is why so many powerful people are fighting to keep them from being shared.

A group of conservative leaders in various policy areas chose the three Bradley Prize winners, beating out 100 other nominees.

The Bradley Foundation, founded in 1985, is devoted to the principles and institutions that promote Americans’ unalienable rights to life, liberty, and the pursuit of happiness. The organization regularly donates to conservative groups that are dedicated to keeping the American dream alive.

With its annual Bradley Prize, which awards $250,000 to each winner, the foundation spotlights individuals who have demonstrated commitment to the conservative movement and whose ideas and work shape effective public policy and promote freedom and prosperity.