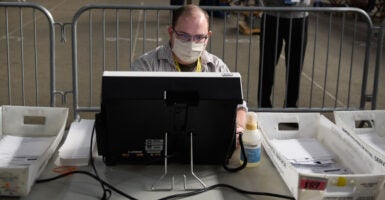 The “unknown” ballots were sent to voters and never returned to election officials, which doesn’t necessarily mean votes weren’t counted, said Ellen Lyons, a spokeswoman for Pennsylvania acting Secretary of State Veronica Degraffenreid, who is in charge of elections in the state.

“[The foundation’s] ‘report’ is another attempt to undermine confidence in our elections,” Degraffenreid’s spokeswoman told The Daily Signal in an email. “To suggest that large numbers of ballots ‘went missing’ is disingenuous and misleading.”

To some degree, both the Pennsylvania secretary of state’s office and the report by the Public Interest Legal Foundation suggested there could be a variety of reasons for the “unknown” status of some mail-in ballots. Each side, however, referred to different possibilities.

Absentee and mail-in voting proliferated across the United States for the 2020 election because of steps election officials took during the COVID-19 pandemic.

In Pennsylvania and most other states, voters must fill out an application form requesting an absentee ballot before getting that ballot. Lyons said some voters might have decided not to vote after all.

“Anyone who knows how elections work knows that this is normal,” Lyons said. “Some voters who apply for and receive a mail ballot opt instead to go to the polls and vote in person on Election Day. And some mail ballot applicants opt not to vote at all, for whatever reason.”

J. Christian Adams, president of the Public Interest Legal Foundation, formerly was a lawyer in the Justice Department’s Voting Section, and has handled election-related cases in 20 states.

“Some also end up in [a] landfill and apartment lobby floors,” Bowman said of ballots in an email to The Daily Signal. “This report reveals that elections are best run by voting in person, where there is supervision and transparency.”

The report from the legal foundation notes: “A ballot can be misdelivered. It can be thrown out with your unpaid bills. It can be left on the floor of apartment mailrooms. … Election officials simply do not know what happened.”

The number of unreturned absentee ballots in the presidential election isn’t out of the ordinary based on the state’s history, Pennsylvania’s Lyons said.

“Historically, between 10 and 15% of mail ballots are not returned, for unknown reasons,” Lyons said, adding:

In Pennsylvania, 85% of the record 3.1 million mail ballots sent out for the 2020 general election were returned by voters. Pennsylvania’s return rate was well above the 77.8% return rate nationally and in keeping with the state’s return rates in previous elections.

The Public Interest Legal Foundation’s report shows the raw number of undeliverable and “unknown” ballots in Pennsylvania in previous elections to be significantly smaller than the more than 425,000 ballots classified that way in 2020.

The mass mail balloting resulted in the first time the state had more unknown and undeliverable ballots than the margin of victory of a presidential candidate. This is a core system failure and why the 2020 push to mail voting needs to be a one-year experiment.

The Public Interest Legal Foundation previously determined that, nationally, 14.7 million mail-in ballots were unaccounted for. The foundation bases its numbers on data from the U.S. Election Assistance Commission.

In separate reports, the foundation also determined that the closely contested states of Wisconsin and Georgia also had a high number of unknown and undeliverable votes.

At least 18 states have passed election reforms so far in 2021 in light of questions raised about the 2020 election, most recently in Texas.