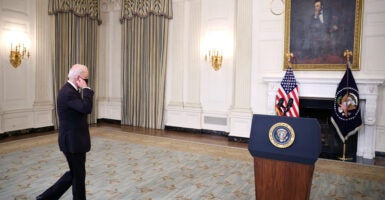 Government officials have a duty to protect and defend the Constitution, but President Joe Biden already has demonstrated that isn’t his top priority. Pictured: Biden arrives Thursday to speak about COVID-19 vaccinations in the State Dining Room of the White House. (Photo: Kevin Dietsch/Getty Images)

President Joe Biden demonstrated his commitment to “norms” last week by delivering a speech threatening governors, and all who oppose his will, with a unilateral edict requiring COVID-19 vaccinations.

As my colleague Fred Lucas reported, Biden “directed the Labor Department to develop an emergency regulation giving the Occupational Safety and Health Administration the authority to enforce a national vaccine mandate for larger employers.”

Here’s more from an editorial in The Wall Street Journal on what Biden did: “He’s forcing all private employers with more than 100 workers—two-thirds of the workforce—to require vaccinations or weekly testing. The non-compliant can be dunned $14,000 per violation.”

What authority does the executive branch have to create a national vaccine mandate and commandeer businesses to do it? Countless legislators and elected officials weighed in to note that Biden’s move had dubious constitutional validity.

“The federal government has no authority to force businesses in Texas and across the country to mandate their employees get vaccinated. American businesses are still recovering from this past year and a half. It is cruel and burdensome to impose this authoritarian mandate,” Sen. Ted Cruz, R-Texas, said Friday in a public statement following Biden’s speech.

There is no doubt the executive edict will be challenged in court.

Even The Washington Post’s editorial board, typically a firm supporter of Biden and his policies, admitted that his order was likely to be challenged legally. But the Post effectively concluded that necessity in this case knows no law.

“Legally, Mr. Biden’s expansive use of executive power is sure to be challenged in the courts,” the Post’s editorial reads. “In normal times, we would not want to see such power used for less pressing needs. But the emergency is real.”

It should be noted that it’s not only the job of the Supreme Court to uphold the law. We should expect and demand more of our leaders, no matter what branch of government.

Government officials all have a duty and obligation to protect and defend the Constitution. But Biden already has demonstrated that isn’t his top priority, despite swearing to do so.

Remember, not long ago, Biden announced a national eviction moratorium through the Centers for Disease Control and Prevention while initially conceding that it probably wasn’t legal.

“The bulk of the constitutional scholarship says that it’s not likely to pass constitutional muster,” Biden said at the time. “But there are several key scholars who think that it may, and it’s worth the effort.”

He then backtracked a bit from that shaky reasoning, but it still shows that this is a president who prioritizes expedient policy goals over the Constitution and the rule of law.

The Supreme Court struck down the moratorium on evictions, but it’s still damaging to have the president act as if constitutional fidelity matters only in regard to what the courts will let him get away with.

It’s hard not to see Biden’s most recent order on vaccines in a similar light, and it represents a further destructive slide into the imperial presidency.

Biden’s old boss, President Barack Obama, came up with infamous “pen and phone” presidential powers. That is, Obama decided that if the representatives of the American people are deadlocked in Congress, he had a pen to sign executive orders that sidestepped them and a phone to rally his supporters.

It seems that we are in an even more advanced stage of Caesarism, where this time Biden doesn’t even bother to say that he’s tired of waiting for Congress. It’s more like he’s assuming that the legislative branch, created to make the laws of our country, has been reduced to a meaningless rump institution.

Topping off Biden’s edict is another mortifying aspect of his speech Thursday evening from the White House: the abrasive and authoritarian tone.

“We’ve been patient, but our patience is wearing thin,” the president warned in a threatening manner, looking into the camera and addressing those who are not vaccinated.

Biden then aimed his sights at the duly elected governors who weren’t aboard with his policies.

“If they will not help, if those governors won’t help us beat the pandemic, I’ll use my power as president to get them out of the way,” Biden said, taking a shot at what remains of federalism in America.

If the president is so concerned about waves of unvaccinated Americans driving up the number of COVID-19 cases, why not do something about the now outrageously porous border that is well within federal authority to control?

So much for unity, moderation, or competence.

The president’s caustic speech on COVID-19 vaccinations is an interesting contrast to the flimsy and excuse-filled speeches he gave in the wake of his Afghanistan withdrawal debacle. As usual, Biden has harsher words for domestic opponents than our enemies abroad.

It’s hardly a combination that will bring the country together or project strength to the world.

At least with the original Caesarism, Rome achieved glorious victory over the Gauls.

What we currently are being subjected to with this administration is a curious mix of brutish, overbearing nannyism on one hand and helpless feebleness on the other.