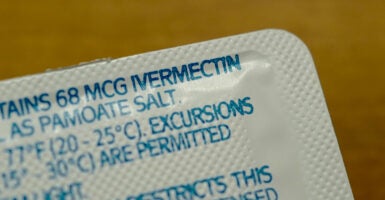 Rolling Stone ran a fabricated story that claimed so many people were overdosing on ivermectin that rural hospitals were not able to prioritize gunshot victims. Pictured: Ivermectin is listed as an ingredient on a container of veterinary medication. (Photo: Smith Collection/Gado/Getty Images)

Not content with publishing what is perhaps the most infamous fake news story this decade, Rolling Stone has doubled down with another whopper.

In 2014, Rolling Stone—a publication that focuses on music, politics, and popular culture—ran a widely publicized story about a violent “rape” that took place at the University of Virginia. The story perfectly fit the left-wing narrative about a college campus rape culture.

It turns out, the whole thing was a fabrication and Rolling Stone retracted the story.

Not only was the University of Virginia rape story utterly debunked, but the publication had to pay $1.65 million in a defamation lawsuit settlement to one of the campuses’ fraternities.

Did the editors at Rolling Stone learn from this experience?

Just over five years later, Rolling Stone has been caught with another viral fake news embarrassment.

Rolling Stone ran a story, from a local Oklahoma television segment, that claimed so many people were overdosing on ivermectin that rural hospitals were not able to prioritize gunshot victims. The story on a local broadcast was told by Dr. Jason McElyea.

“The ERs are so backed up that gunshot victims were having hard times getting to facilities where they can get definitive care and be treated,” McElyea said.

The doctor then described a situation where gunshot victims were essentially stuck without hospital treatment and even an ambulance because the facilities were all full.

Let’s stop here. How plausible does this sound?

For this story to be true we must assume a few things.

First, that a massive number of people are taking ivermectin and ending up in a hospital.

The usage of ivermectin to treat COVID-19 has been hotly disputed. Many of those opposed to the use of the medicine have called it a “horse dewormer.” CNN even ran an article about this, clearly trying to make conservative advocates for the treatment seem crazy.

However, many medicines have multiple uses, and ivermectin has successfully been used for treating humans with other viral diseases. This certainly doesn’t mean that it is a successful coronavirus treatment, but it does mean that we can assume that ivermectin use in humans isn’t necessarily deadly or life-threatening.

The second issue here is that we have to believe that there is a massive number of gunshot victims in rural areas to the point where hospital overcrowding means they are literally just bleeding out on gurneys like they are in some kind of war zone.

The violent crime surge in American cities has been well documented, but there is little evidence this trend is hitting rural areas to the same extent. And even if there was a massive surge in gunshot victims, are we really to believe that they would not immediately get priority in hospitals?

At the very least, the claims in this story should have been seen as suspect, and certainly worth verifying. Instead, Rolling Stone just rolled with the story anyway.

MSNBC’s Rachel Maddow picked up the story and promoted it on her show.

Joy-Ann Reid, another MSNBC host, took the bait too.

Fox News reported that a number of other publications also took the bait and promoted this story, including Newsweek, The Guardian, and New York Daily News.

Shortly thereafter, the entire story turned out to be fake news. What a surprise.

Although Dr. Jason McElyea is not an employee of NHS Sequoyah, he is affiliated with a medical staffing group that provides coverage for our emergency room. With that said, Dr. McElyea has not worked at our Sallisaw location in over 2 months. NHS Sequoyah has not treated any patients due to complications related to taking ivermectin. This includes not treating any patients for ivermectin overdose.

Rolling Stone issued a massive correction to the story but has so far not retracted it.

This recent fiasco is at least instructive. These bias incidents, if I may borrow a phrase from modern woke college campus vernacular, are not just the result of occasional sloppy journalism.

In the modern media environment, narratives often come before facts.

The Rolling Stone story went viral, no doubt, because it confirmed the biases of its left-leaning audience.

That’s perhaps less surprising and concerning than the fact that this fantastical-sounding story made its way past editors and into print without any independent verification. This, just years after the publication was embroiled in an infamous and costly fake news hoax.

How could this happen?

In many ways, the reason these two fake stories were published follows the same pattern.

The story confirms the political and cultural narrative of choice. The absurd claim that people were overdosing en masse in Oklahoma and stopping gunshot victims from getting treatment was clearly aimed at attacking those bad, icky Trump voters in flyover country who don’t believe in capital “S” science.

It’s easy to see how the media hivemind just picked up this dubious account and ran with it, just as it has done in an increasing number of cases.

Unlike yesteryear, the media environment isn’t merely biased, it now frequently devolves into pure activism at the expense of accuracy or truth.

The cost has been the utter demolition of its collective credibility except among the ideologically faithful.

This is simply additional evidence that we now have a nexus of like-minded institutions—from media to Big Tech, to even medicine and science—that almost uniformly promote the same cultural and political ethos. Stories that fulfill the narratives they prefer go unquestioned. Ones that work in opposition are roundly questioned and, in some cases, even suppressed.

It’s this reality that has destroyed trust in institutions in a deeply divided society where the culture-shaping institutions simply behave as if everyone thinks or should think as they do.

If nothing changes in that dynamic, the future of freedom in this country will be bleak. At the same time, this moment has surely opened the eyes of many Americans.

As old institutions wither and abandon all credibility, perhaps new ones will rise and replace them.