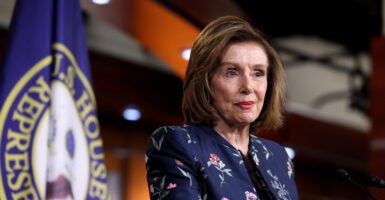 Speaker Nancy Pelosi, seen here at her weekly news conference July 22, has said that the House would not take up the bipartisan infrastructure bill until the Senate passes a separate $3.5 trillion spending bill. (Photo: Anna Moneymaker/Getty Images)

In all, the plan would spend some $761 billion on education and workforce programs, on par with total annual education spending from all sources—federal, state, and local.

The bulk of the proposed education spending in the House Education and Labor Committee proposal—$450 billion—would be earmarked for federal universal preschool and child care. The spending would go toward government universal preschool for 3- and 4-year-old children, as proposed in the Biden administration’s American Families Plan.

In addition to this likely driving up the cost of preschool broadly, it’s unlikely to benefit participating children. The bulk of the scientifically rigorous evaluations of preschool programs yield consistently negative findings; namely, that any benefits fade out over time.

Demand for new, large-scale government spending on early-childhood education and care is also not evident. About half of 3- and 4-year-olds already attend formal pre-K programs. And half of women who are employed and have children under 18 would prefer to stay at home when their children are young.

The new taxpayer spending would also be used to pay families to send their children to government-approved child care centers, ensuring that families earning up to twice the median income level pay no more than 7% of their income for child care.

The plan would also use taxpayer dollars to selectively increase the wages of child care workers in government-approved programs by providing federal funds to states so they can add up to $16,000 per year to the wages of each full-time employee. When added to base salaries, that could mean the federal subsidy would result in salaries of more than $48,000 for some child care workers—more than elementary schoolteachers in some states.

It would be a mismatch of job requirements and salary that is to be expected through centrally planned wage-setting.

The so-called Build Back Better plan financed through the House bill includes massive new spending in the K-12 education sector, too. The so-called reconciliation package includes $82 billion to modernize school infrastructure, on top of unprecedented federal spending for schools that was doled out through three COVID-19 spending packages in 2020 and 2021.

When you add together the taxpayer dollars that Congress appropriated for education since March 2020, it comes out to a staggering $282 billion. To add insult to injury, state education agencies still have an estimated $180 billion in unused emergency funds, in part because only 5% of American Rescue Plan funds are to be spent this year, with the remainder being allocated through 2028.

Not only is this more proposed spending superfluous and unaffordable, school infrastructure is not the role of the federal government. It’s the responsibility of districts—not Washington—to construct and maintain schools.

The provision allows schools and school districts to offer free school meals to all students within the school or school district if 40% of the student body is low-income. Further, as improperly applied by the Agriculture Department, It also allows Individual schools to be grouped together to meet this 40% number, even If some schools within that group don’t have a single low-income student.

The spending bill would reduce that figure to just 25%, meaning that if 1 in 4 students within a school qualify for free meals, all students in the school would qualify, regardless of their families’ household income, expanding school meals meant for children in need to more middle- and upper-income students.

But the spending spree doesn’t stop there.

The House proposal also includes $111 billion for “free” community college, $9 billion for grants to aid in student retention and completion, and a $500 per student increase in the maximum Pell Grant award.

As Preston Cooper of the Foundation for Research on Equal Opportunity wrote in Forbes, average tuition at community colleges is about $3,700 per year, with existing Pell Grant funding typically already covering the full amount.

Community colleges also suffer from quality issues, making massive new taxpayer spending on the institutions a curious choice, particularly as interest in apprenticeship programs is on the rise (up 64% since 2010).

Incredibly, as Cooper notes, “a degree-seeking student who enrolls in community college has just a 40% chance of earning a credential within six years.”

The community college proposal is a federal-state matching grant. As Campus Logic’s Carlo Salerno pointed out on Twitter, this federal-state match “forces poor states to put money into their higher [education] systems if they want federal [money], rather than spending their money on other public services their citizens desperately need.”

There are other gems as well. As Congressional Quarterly reported, it would also create new federal programs at the Labor Department to train people for jobs pertaining to climate change.

The bulk of the education spending in this proposal is currently under consideration in the House Education and Labor Committee, and will then move to consideration by the House Budget Committee later this month.

Although the spending is staggering and untenable, what is most troublesome is what that spending signifies; namely, growth in a federal government so large that it would attempt to provide child care, build schools, provide meals to nonpoor students, and subsidize the most underperforming sector in higher education.