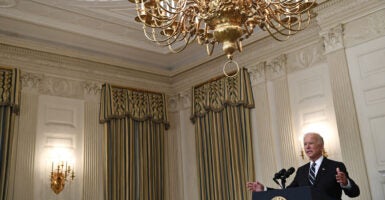 “For without unity, there is no peace, only bitterness and fury. No progress, only exhausting outrage. No nation, only a state of chaos. This is our historic moment of crisis and challenge, and unity is the path forward.”

President Joe Biden spoke these words when he was inaugurated on Jan. 20. But Wednesday, in the midst of multiple scandals, debacles, and crumbling support, and on the eve of the 20th anniversary of 9/11, Biden demanded the resignation of 18 of former President Donald Trump’s appointees from government advisory boards, despite their three-year terms.

So much for unity.

This demand is part of a pattern for Biden. Previously, he has demanded the resignation of Trump appointees from the Administrative Conference of the United States and the firing of the bulk majority of the Homeland Security Advisory Council in the midst of a historic border crisis.

Prior to the Biden administration, there was an unspoken consensus that members placed on advisory boards by an outgoing administration would be maintained by the present administration, for a mixture of reasons: ideological diversity, expertise, and continuity, as well as, in some cases, honorary sinecure and an attempt at some peaceful coexistence between political parties.

In this round of the Biden purge, he focused on the boards of visitors at the Air Force Academy, West Point, and the Naval Academy.

One of the Trump appointees is Meaghan Mobbs, an Afghanistan veteran, clinical psychologist, and former Army captain who was asked to resign from the West Point Board of Visitors. She issued a statement refusing to resign and called out the political animus:

When I joined the board under the Trump administration, there were holdovers from the Obama administration. They were not terminated but instead served alongside Trump appointees. This mix of perspective, experience, and belief systems ensured there was a diversity—a value the Democratic party purports to hold above all else.

Army Lt. Gen. Guy Swan, a veteran of the Gulf War and Iraq War—who, during his 35-year military career, commanded units at every level, including three commands as a general officer—was also targeted by the purge. Swan enjoyed being nonpartisan in his role as the Army’s chief of legislative liaison. Swan shared his thoughts on his dismissal:

This dismissal took me completely by surprise. My only purpose for serving on the West Point Board of Visitors was to ensure that the U.S. Military Academy remains the world’s preeminent leader development institution.

Assisting the Superintendent and his staff in producing leaders of character for the U.S. Army who will fight and win our nation’s wars was and continues to be my mission. I very much wanted to continue that mission and finish my term.

But for Biden, Swan’s irredeemable sin was being appointed by the previous president.

By trying to purge these military boards, Biden has once again broken with the American tradition of presidents endeavoring to not politicize the military. It is fitting that this break is also joined by the break of the sacred commitment to leave no one behind, as hundreds of Americans are still stranded in a Taliban-controlled Afghanistan.

Many of the individuals caught up in the unity purge have refused to resign. They are joining a legal battle with Trump appointee Roger Severino, who is contesting that Biden does not have the authority to fire him from his three-year term on the Administrative Conference of the United States.

As my colleague John Malcom has noted, the core of this dispute is a string of Supreme Court case law:

Regardless of the legal questions that will play out, Biden has once again shown his vindictive streak, which is at complete odds with the man he presented himself to be—and the image that the media reinforced—during the presidential campaign.

Those who were promised a “return to norms” were lied to. But for Biden, norms are meant to be broken and those who cling to them are meant to be disappointed. If that wasn’t clear to conservatives by this point, it should be by now. The left is no stranger to using power to reward friends and to punish enemies, in fact, it is expert.

Incompetence and vindictiveness are a bad combination. Unfortunately for our nation, that is the ruling theme of the Biden presidency.