Biden: Vaccine Mandates ‘Not About Freedom or Personal Choice’ 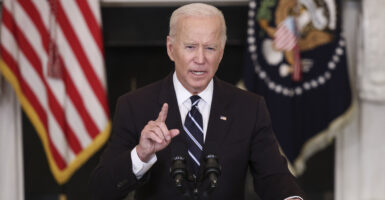 “It's about protecting yourself and those around you," President Joe Biden says Thursday evening in announcing vaccine mandates in the State Dining Room of the White House. (Photo: Kevin Dietsch/Getty Images)

President Joe Biden announced a string of mandates requiring federal employees and a sizable number of private sector workers to be vaccinated against COVID-19.

“This is not about freedom or personal choice,” Biden said in formal remarks Thursday evening. “It’s about protecting yourself and those around you, the people you work with, the people you care about, the people you love. My job as president is to protect all Americans.”

Speaking in the State Dining Room at the White House, Biden said the Department of Labor will require all employers that have 100 or more employees—“that together employ more than 80 million workers”—to make sure their workforces are vaccinated.

The president’s executive order requiring federal workers to be vaccinated likely will affect about 2.1 million civilian employees, plus millions of contractors.

Biden said the economy is coming back, then awkwardly added: “We cannot let [the] unvaccinated do this progress, undo it.”

“We’ve been patient,” Biden said sternly at one point, singling out those who have chosen not be vaccinated, “but our patience is wearing thin and your refusal has cost all of us.”

The president noted that several major corporations (“even Fox News”) already mandate that their employees get vaccinated, and he seemingly divided America into two camps.

The president also announced plans to require all health care facilities that receive Medicare and Medicaid funding to have staff members get vaccinated. This likely would affect about 17 million health care workers. He said:

Already I’ve announced we’ll be requiring vaccinations of all nursing home workers who treat patients on Medicare and Medicaid, because I have that federal authority. Tonight, I’m using that same authority to expand that to those who work in hospitals, home health care facilities, or other medical facilities, a total of 17 million health care workers.

The president, who spoke for about 25 minutes, at one point seemed exasperated.

“We’ve made vaccinations free, safe, and convenient. The vaccine is FDA approval [sic],” Biden said. “Over 200 million Americans have gotten at least one shot. We’ve been patient, but our patience is wearing thin and your refusal has cost all of us.”

The president also called on Americans to “show respect” to flight attendants and warned air travelers about wearing masks to protect each other from COVID-19.

“The TSA will double the fines on travelers that refuse to mask. If you break the rules, be prepared to pay,” Biden said, referring to the Transportation Security Administration, responsible for scrutinizing passengers at the nation’s airports.

“Get vaccinated,” Biden whispered at the end of his remarks, thumping a fist on the lectern and walking out of the room.

The Biden administration already had imposed vaccine mandates on military personnel and employees of the Defense Department.

The more sweeping mandates come as Biden’s approval numbers fell and cases of the delta variant of COVID-19 increased.

More than 177 million Americans, or just more than half at 53%, already have been vaccinated against the disease caused by the novel coronavirus, according to the Centers for Disease Control and Prevention.

More than 208 million Americans, or almost 63%, have gotten at least one dose of vaccine. Among the most vulnerable population, those 65 and older, 92.6% have had at least one dose and 82.2% are fully vaccinated.

“This is a dark day in American history. Biden is launching a fundamental assault on the core of our constitutional rights—the right of each adult American to be the sovereign of his or her own body,” Jenny Beth Martin, honorary chairman of Tea Party Patriots Action, said in a public statement.

“No American should be forced by the government—or anyone else, for that matter—to put something in their body they don’t want to take, or be forced to lose their job as a consequence,” Martin said.

Pfizer’s COVID-19 vaccine, the first to arrive as a result of the Trump administration’s Operation Warp Speed, was fully approved by the Food and Drug Administration in August.

The Pfizer vaccine already had won the FDA’s emergency approval, along with vaccines manufactured by Moderna and by Johnson & Johnson, which await final approval.

However, the Justice Department’s Office of Legal Counsel issued an opinion over the summer saying that federal law doesn’t stop public agencies and private businesses from requiring vaccines that have only emergency use authorization.

Vaccine mandates are both popular and effective, White House press secretary Jen Psaki said Wednesday, adding that government can be a model to private employers.

“We’ve also known as, say, the federal government—as one of the biggest employers in the country—that we knew we would take an approach over time to implement any mandates, or mandates that would require vaccination by employees,” Psaki told reporters.

“There are some companies out there that were waiting for final approval by the FDA,” she said. “There also were some companies that wanted a period of time to implement mandates. That’s all understandable.”

Also Thursday, Psaki defended Dr. Anthony Fauci, director of the National Institute of Allergy and Infectious Diseases, after newly released documents indicate that he may not have been truthful to Congress about $3.1 million in federal research funding for the EcoHealth Alliance and the Wuhan Institute of Virology.

“NIH has never approved any research that would make a coronavirus more dangerous to humans, a reminder that there are previous and different coronaviruses than the existing one we’re battling,” Psaki said.

“And the body of science produced by this research demonstrates that the bat coronavirus sequences published from that work NIH supported were not the COVID-2 strain, so what he said was correct,” she said of Fauci.