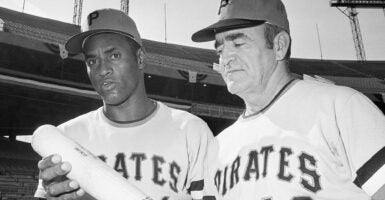 Pittsburgh Pirates Hall of Fame right fielder Roberto Clemente poses with the team's manager, Danny Murtaugh, on Oct. 15, 1971, in Baltimore during the 1971 World Series. The Pirates beat the Orioles in seven games. Clemente was one of the nine all-minority players who took the field about six weeks earlier on Sept. 1, 1971, making baseball history in the process. (Photo: Associated Press)

Fifty years ago, on the first night of September 1971, the Pittsburgh Pirates entered a game with the visiting Philadelphia Phillies, clinging to a four-and-a-half-game lead in the National League East.

The Pirates had led the division since early June—by as much as 11 and a half games—but with only 25 games left in the regular season, the Pirates’ reduced advantage meant that each ballgame held increased importance.

Pittsburgh manager Danny Murtaugh—who was, in the interest of full disclosure, my paternal grandfather—filled in his lineup card and sent nine players out onto the Three Rivers Stadium turf, who made Major League Baseball history.

Twenty-four years after Jackie Robinson had broken the color barrier as the first black player in the major leagues, the Pirates had become the first team ever to start nine minority players.

The nine men who took the field that night included some of the great names of the era—and also in baseball history:

There were at least a few slightly unusual changes to the lineup that made it possible.

Interestingly, Murtaugh went with the left-handed-hitting Oliver at first base over the right-handed Bob Robertson, even though the Phillies had a lefty on the mound in Woodie Fryman.

Cash got the start at third base over Richie Hebner, who might have had a viral infection. And regular shortstop Gene Alley was hobbled with a knee injury, putting Hernandez in the game.

Incredibly, especially as compared with today’s standards, the first six hitters in that lineup were all batting over .300 at the time, so deep into the season. Considering that, it was arguably a merit-based selection anyway.

And as the game commenced, almost no one realized what was happening.

Sanguillen has said that he didn’t realize that there were only players of color on the field until they were already underway.

Oliver has recounted that at one point, while sitting on the bench during a Pittsburgh turn at the plate, he turned to Cash and said, “Dave, you know, we have all brothers out there.”

The two Pittsburgh newspapers were on strike at the time, so there was no local coverage of the game or its historic implications, nor did it receive much attention elsewhere. Philadelphia writer Bill Conlin made a bare mention of it by referencing the “all-soul lineup.”

After the game, Murtaugh was tightlipped about his decision, reportedly saying, “I thought we had nine Pirates out there.”

And UPI quoted him as saying, “When it comes to making out the lineup, I’m colorblind, and my athletes know it. They don’t know it because I told them, but they know it because they’re familiar with the way I operate.”

These days, the woke police would object to someone claiming to be “colorblind,” but in Murtaugh’s case, it was figuratively and literally true. Not only had he sent an unprecedented all-minority team out onto the field as a baseball manager, but as a younger man he had been rejected by the Army Air Corps when he volunteered to become a World War II pilot because he was, in fact, physically colorblind. He ended up in the infantry instead.

But regarding that notable game in Pittsburgh, some have wondered whether Murtaugh knew what he was doing after all.

“He didn’t miss much,” said pitcher Steve Blass, a star of the 1971 World Series that was yet to come.

My grandfather never spoke much about that game, either immediately afterward or in the years following, and was mostly concerned with winning. No one in my family remembers hearing about it from him, either.

History records that the 1971 Pirates club would go on to win the National League East division title, the National League pennant, and the World Series. Led by the immortal Clemente and fellow future Hall of Famer Stargell, they would beat the heavily favored Baltimore Orioles in a seven-game series that October. And while the World Series title was a great achievement, the now-famous lineup on one particular night is what has lasting significance.

Years later, my father (also named Tim Murtaugh), who spent years as a catcher and manager in the Pirates’ minor league system, chatted with former major league slugger Dick Allen at an event honoring that September Pirates starting nine. Allen told a story that he thought demonstrated that Murtaugh knew exactly what he was doing that night.

With a little research, I found that Allen had related it before.

It used to be that when major league teams broke spring training to start the season, they would pair up with another ballclub and play exhibition games in smaller towns as they made their way north.

In 1963, Allen’s rookie season, his Phillies were traveling with the Pirates, and Murtaugh was the manager.

One stop was in Asheville, North Carolina, where the game was being sponsored by the local Chamber of Commerce. Prior to the first pitch, Allen noticed a commotion on the field involving Murtaugh.

“I can still see tobacco juice flying out of Danny’s mouth and going all over this guy’s shirt,” Allen said. “What Danny had done was, he’d penciled-in an all-minority lineup. And the guy from the Chamber of Commerce was out there to tell him he couldn’t do that. At first, Danny said that he didn’t know it was an all-black lineup until they told him. But he didn’t want to change it, and that’s when the tobacco juice started flying.”

Under the threat of the game being canceled, Murtaugh put white second baseman Bill Mazeroski into the starting lineup, but removed him after his first at-bat, thereby rendering the team all-minority anyway.

Given that incident occurred in 1963—a year before the federal Civil Rights Act—it’s easy to conclude that Murtaugh knew exactly what he was doing eight years later when he wrote out his starting lineup against the Phillies.

Murtaugh played nine seasons in the major leagues, interrupted by service in World War II, and managed the Pirates in four different stints totaling 15 seasons. He compiled a lifetime managerial record of 1,115 wins against 950 losses, for a winning percentage of .540, with two World Series victories, in 1960 and 1971.

Those figures match up favorably against those of many members of the Baseball Hall of Fame, and perhaps one day, he will be honored by induction. Nevertheless, in our family, the lineup card he posted on the evening of Sept. 1, 1971, will always be a part of his legacy, of which our family is very proud.