Is Big Business Finally Realizing Not Everyone in America Is Liberal? 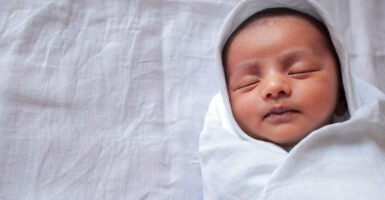 Three-quarters of Americans support significant abortion restrictions, according to a January Marist poll commissioned by the Knights of Columbus. (Photo: Getty Images)

Something funny is happening in Texas.

In the last few years, a solid pattern has emerged around successful conservative legislation that becomes law: Big businesses speak out, perhaps even threatening boycotts or to not do business in the state, and are roundly applauded on social media and by media.

Yet in Texas, where a law protecting the lives of young unborn children is now in effect, big business isn’t diving right in.

Now that’s not to say every big business has remained quiet. GoDaddy, a domain host, told Texas Right to Life it had 24 hours to move its site. Dating app Bumble, based in Austin, Texas, announced a fund to help Texas women get abortions—or to use the extremely woke language of their statement, “a relief fund supporting the reproductive rights of women and people across the gender spectrum who seek abortions in Texas.” The CEO of Match Group, which has several dating apps, announced a similar fund for Match employees. (Because what says romance like abortion promotion?)

Uber and Lyft announced legal funds for any of their drivers who take women to an abortion clinic (the Texas law says anyone involved in facilitating an abortion can be sued), with Lyft doubling down with a $1 million dollar donation to the nation’s largest abortion provider, Planned Parenthood.

Yet, still that’s a lot of big businesses opting to remain silent.

Now while it’s possible these business are just scrambling and conducting polls and focus groups during the holiday weekend, I’m hopeful it indicates they’ve realized plenty of Americans are pro-life—and coming out against the Texas law would only hurt their bottom line.

After all, 76% of Americans support significant abortion restrictions, according to a January Marist poll commissioned by the Knights of Columbus. It’s true that 25% of Americans would like abortion available in the first trimester, which is a longer timespan than the Texas law. (Texas’ law bans abortion after an unborn child’s heartbeat can be detected, which is around six weeks.) But it’s also true that a mere 15% of Americans want abortion allowed at any time of a pregnancy—yet that’s the status quo everywhere except Texas, thanks to Roe v. Wade and the Supreme Court.

So why do big businesses keep going woke and taking controversial position? One issue might be they mistake social media feedback as representative of their overall consumer base. While a company going woke is likely to get lots of love on Twitter, Twitter just isn’t the real world. First off, 10% of U.S. Twitter users are responsible for 92% of U.S. tweets, according to an October Pew Research Center study. And those 10% are very, very skewed: 69% of them are or lean Democrat, while 26% are or lean Republican.

But whatever the reason, it’s a mistake for companies. Plenty of pro-life Americans are consumers, too. I personally deleted both my Lyft and Bumble accounts once I heard about their responses.

This might be just a blip. But if it’s the beginning of companies focusing on business, not politics, that would be a welcome change in American life.