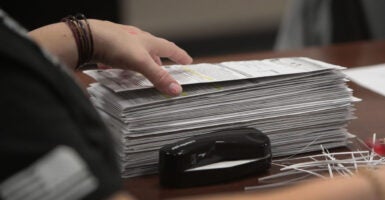 Editor’s note: Here’s a sampling of your responses to some of The Daily Signal’s recent coverage, gleaned from the mailbag at letters@dailysignal.com.—Ken McIntyre

Dear Daily Signal: Regarding Fred Lucas’ article, mail-in voting is an invitation to cheat, period (“15 Million Votes in 2020 Election Not Accounted For, Report Finds”). It was not necessary to institute mail-in voting in 2020 in the first place, except to facilitate cheating and fraud.

People were free to use absentee ballot systems if they did not want to vote in person because of COVID-19.  Absentee ballot requests provide signature comparison data, which mail-in votes do not.

Yet I fully agree with the necessity to maintain voter eligibility lists, and the Public Interest Legal Foundation is certainly doing the proper thing in trying to ensure that federal voter registration laws are enforced. But it matters just as much whether mail-in voting nonsense is being practiced by a state.

Failure to maintain accurate voting registration lists makes it easy to cheat whether voting in person or by absentee ballot, just as much as for mail-in voting.—Joseph Pascucci

There may have been many undeliverable ballots, but what of the voters who received more than one ballot? Some people I know received six.

Most people voted who wanted to vote. I bet many voted both through the mail and in person.

The other thing is that there were problems with voting machines that no one is talking about. Myself, my husband, and at least two friends—voting in different places at different times of the day—had our votes rejected repeatedly by machines.  Common denominator here: We were straight-ticket Republican voters.

Makes me wonder. I have written to my state representative and many others. No one wants to hear it.

Yes, there needs to be a forensic audit of the election. So sad for a country this big, that we cannot even run a fair election.—Deborah Leath

I invested in a small number of rental houses to supplement my retirement. I rent them at half the market rate to help less fortunate people.

All include appliances. Broken things get fixed ASAP. And I pay all utilities on all but one.

When everyone was locked down during COVID-19 and I got the $1,200 stimulus check, I gave my renters a month’s free rent and utilities.

I didn’t receive the $1,400 stimulus check my renters received recently, but they all have jobs and can afford to pay rent.  However, one has decided not to pay rent, which includes all utilities.

I feel betrayed because of the new (illegal) eviction moratorium. I wish I could tell Kavanaugh about the impact his decision had on rental property owners. We have bills too.—June White

I guess Kavanaugh forgot to read Chief Justice John Roberts’ first opinion upholding Obamacare as a “tax” (though it never was advocated as such). The Supreme Court is not responsible for tidying up sloppy legislative language and mistakes, just interpreting what’s before it.—Daniel Westerbeck, Lakewood Ranch, Fla.

Dear Daily Signal: I am a New Yorker who has resided in Florence, Italy, for 41 years. Two things about Fred Lucas’ chilling article (“Pro-Amnesty Groups Supplied These 5 Players on Biden’s Immigration Team”) jump out at me.

First, so many of these open immigration activists are women. Is this only because of President Biden’s diversity obsession, or is it representative of the “field” in general?

More importantly, it seems that Congress coming together to work on “comprehensive immigration reform” is just an outdated, old-fashioned goal of Republicans. Democrats seem to have given up on making change through the usual, representative, governmental processes that have worked through compromise.

Democrats now are effecting the change on immigration that only they want through big money. They don’t need the legislative process any more.

Isn’t there anything that was built into our system to prevent this from ever happening? I know that particular lobbies long have had power that makes many of us uncomfortable. But here we’ve come to a far more brazen attempt to actually establish policy from endless amounts of outside money.—Stacey Winters, Florence, Italy

Anyone who has been paying attention to Afghanistan since we went there knew there were only two choices:  Kill them all or do what we came to do and then go home.

George W. Bush sent troops there (good on him for that) to end the terrorist sanctuary, and that was successful.  But then we got into nation building and slipped into the same trap that our British and Russian predecessors did.

Then we got Barack Obama and his “good war” in Afghanistan before he figured out that politically it was better to play “let’s pretend” and keep it off the front pages. He got lucky when Osama bin Laden, the face of al-Qaeda, was located and killed. But that didn’t gain much.

Donald Trump started to look seriously at getting a pullout done, but was buried in the bogus impeachment stuff and other things. Then came Joe Biden. He actually did what Trump was going to do, but did it in such an inept fashion that he now owns the whole thing.

A couple of observations: It became apparent fairly early on—when Hamid Karzai was Afghanistan’s president—that nation building was not going to work and Karzai did not have the stomach for the fight.

It also became apparent that the Taliban remained a significant force and that our efforts to build a viable Afghan army were not going to succeed simply because there was no Afghan political will to do so. Corruption ruled and won.

The final observation is that the U.S. government and the military were operating in Pollyanna-land. If the State Department and the Defense Department really believed what they have been telling us for a decade or more, and if the intelligence community did not see what was going on, then we have been led around by ineptitude on a gigantic scale.

Warner has been head of the Senate Intelligence Committee for how long now? Where were those committee members as all this was going on?—James Helberg

Dear Daily Signal: In her commentary article, Kaitlyn Romaine encourages debate with anyone who is trying to push critical race theory in grades K-12 (“What My College President Gets Wrong About Critical Race Theory”).

This young lady is not shutting them down. She is to the point and quite clear on her beliefs.

Knowing how hard it is for students on campuses today to challenge their professors, I applaud Kaitlyn’s candor about this matter. I hope her classmates and every other student who shares her concerns will challenge the logic behind critical race theory without fear of being canceled.

Isn’t post-high school education where open dialogue should happen? I just heard a pundit say that wokeness = weakness. How true.

Dear Daily Signal: To augment what columnist Ben Shapiro wrote, New York Gov. Andrew Cuomo was going down at some point due to either his COVID-19 nursing-home scandal or his sleazy conduct (“The Demise of Andrew Cuomo, Love Gov”).

By being trashed for sexual misconduct, Cuomo himself took the heat, not New York Democrats in total. If it was the COVID-19 scandal that was the issue, the entire Democratic establishment and the media would be roped in.

Although Cuomo’s misconduct was a legitimate issue, it created a perfect smokescreen to obscure the larger issue: the deaths of those poor people in the nursing homes. Now Cuomo and the Democrats will never be held accountable for murder.—John Funk, California

It’s clear from Douglas Blair’s commentary on PayPal’s new program that the Anti-Defamation League has forgotten its mission and what it was tasked to do when founded (“PayPal, Like-Minded Companies Don’t Want Conservatives’ Money”).

But what could one expect from Jonathan Greenblatt, the head of the Anti-Defamation League, a “woke” Obama administration lackey who couldn’t shine former ADL National Director Abe Foxman’s shoes, let alone fill them?

Greenblatt wouldn’t recognize antisemitism from Black Lives Matter or BDS (Boycott, Divestment, Sanctions) if  their members spit in his face. The organization is a mere shadow of what it once was.

Meanwhile, Greenblatt does nothing to speak out against the rampant Jew-hatred faced by Jewish college students across the nation from antisemitic bullies who are allowed to spew their venom as college administrators shiver in their shoes in fear that speaking out against this hatred will label them with the dreaded R-word.

I live in South Africa and find your president, Joe Biden, somewhat amusing and not trustworthy based on how he chops and changes his narrative.

What I also find peculiar in listening to various broadcasts about the situation in Afghanistan are Biden’s constant references to the planned evacuation of U.S. citizens who are still trapped.

At the same time, I hear him constantly refer to COVID-19 in the U.S. and use a somewhat threatening tone toward any would-be transgressors of imposed rules and regulations.

But I have not once heard Biden make any reference to the possibility of a widespread escalation of COVID among the thousands of Afghans trapped at the Kabul airport. Strange to say the least.—Pieter Pienaar, Paarl, South Africa

It was nicely expressed recently in my church, as the priest reminded us that we each have free will and every individual is special.—Janice Taylor, Colorado Springs, Colo.