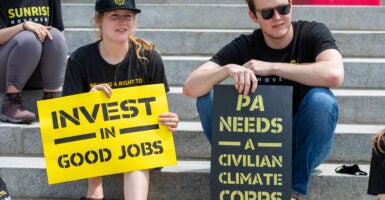 Republicans on a Pennsylvania House committee vote to adopt a resolution to spike climate regulations approved by a state commission the day before. Pictured: Climate activists from the Sunrise Movement rally June 21 at the Pennsylvania State Capitol in Harrisburg. (Photo: Paul Weaver/SOPA Images/LightRocket/Getty Images)

No sooner did a Pennsylvania state commission narrowly approve new climate regulations this week than state lawmakers advanced a resolution to prevent those rules from taking effect.

Republicans on the House Environmental Resources and Energy Committee voted Thursday to approve a concurrent resolution to spike the regulations. They were joined by state Rep. Pam Snyder, a Democrat, whose district includes Greene, Fayette, and Washington counties.

The regulations would enable Pennsylvania to become part of the Regional Greenhouse Gas Initiative, a multistate agreement to address climate change that includes 11 New England and mid-Atlantic states.

Government regulators in participating states compel electric utilities to purchase carbon allowances at quarterly auctions whenever the power companies surpass the cap on carbon dioxide emissions established by RGGI, as the pact is known.

The Pennsylvania General Assembly created the Independent Regulatory Review Commission in 1982 to determine whether state agencies have the statutory authority to adopt regulations and whether regulations are consistent with state lawmakers’ intent.

The commission’s approval order for the climate regulations is available here.

What happens next? The state Senate and House have until Sept. 15 to report out a concurrent resolution disapproving of the regulations. They then have as many as 30 days to adopt the measure and present it to the governor.

A veto from Wolf is expected, meaning that to stop him the General Assembly would need to muster enough votes to override that veto.

“Climate change is one of the most critical issues we face and I have made it a priority to address ways to reduce greenhouse gas emissions,” Wolf said in a press release hailing the commission’s action. “By participating in RGGI, Pennsylvania is taking a historic, proactive, and progressive approach that will have significant positive environmental, public health, and economic impacts.”

Yaw expressed concern that the commission’s decision to approve the climate regulations could mean Pennsylvania “will lose control” over its own energy production, economic development, energy security, and environmental protection.

“For the first time in Pennsylvania’s history, a decision by the Independent Regulatory Review Commission has opened the door for Pennsylvania to join an interstate initiative without legislative approval,” Yaw said in a press release.

In June, the state Senate passed a bill prohibiting Wolf from joining the Regional Greenhouse Gas Initiative without the General Assembly’s approval. The bill passed by a veto-proof margin, with six of Wolf’s fellow Democrats voting with the majority. A similar bill in the House awaits a floor vote.

Yaw’s committee is expected to meet Sept. 14 to move a resolution disapproving of RGGI that mirrors the House action Thursday.

Lawmakers in both parties with reservations about Wolf’s actions on climate change have argued that cap-and-trade arrangements and quarterly auctions that figure into the multistate initiative would result in imposition of carbon taxes on state residents that only the General Assembly has the authority to approve.

Metcalfe also said that Wolf, his executive agencies, and the commission are “fully complicit in assaulting the Constitution, the law, and the people of Pennsylvania.”