Texas Heartbeat Law Is Now in Effect. Here’s What You Need to Know. 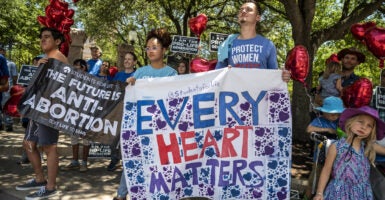 The Texas Heartbeat Law went into effect on Wednesday. Pictured: Pro-life demonstrators stand near the gate of the Texas Capitol on May 29 in Austin. (Photo: Sergio Flores/Getty Images)

Americans in many states support significant restrictions on abortion. Accordingly, policymakers are working across the country to enact policies that reflect this consensus, rooted in the understanding that life is our most basic human freedom and should be protected in public policy.

A recently enacted Texas law that restricts most abortions after a fetal heartbeat can be detected went into effect on Wednesday after the U.S. Supreme Court denied a request for emergency injunctive relief requested by Texas abortion providers. As a result, most abortion activity in Texas has come to a halt. Litigation will undoubtedly continue in the days and weeks to come.

This litigation evokes a core principle: The law must protect innocent human lives, including those who are not yet born, and support women facing a challenging or unplanned pregnancy.

The Texas law prohibits most abortions after a fetal heartbeat can be detected via ultrasound, which is at roughly six weeks gestation. It also prohibits individuals from assisting a person in obtaining an illegal abortion.

These so-called heartbeat bills have passed in various states in recent years, but all have been blocked by courts that have deemed them to run afoul of precedent established by Roe v. Wade and subsequent Supreme Court jurisprudence.

But the Texas Heartbeat Act takes a novel approach. Specifically, state officials may not enforce the law and are granted sovereign immunity against anyone seeking to bring suit on the grounds that the bill is contrary to constitutional law.

Instead, private citizens may bring a civil enforcement action against someone who performs an abortion in violation of the law or assists someone in obtaining an illegal abortion. Therefore, the only way for an abortion provider to claim a defense against application of the law is to wait for a private actor to sue, and then raise their contrary argument that the law itself is unconstitutional.

The Supreme Court recognized that the law implicated serious constitutional questions, but that the plaintiffs had failed to meet their procedural burdens and were unable to prove that an injury was imminent.

The text of the law itself prevented suit against the named defendant judge, and the private defendant (a Texas pro-life activist) submitted an affidavit that he had no present intention of pursuing an enforcement action. The Texas abortionists, therefore, couldn’t prove that they would be irreparably injured absent a stay.

In denying the plaintiffs’ application for relief, the five conservative justices commented, “[T]his order is not based on any conclusion about the constitutionality of Texas’s law, and in no way limits other procedurally proper challenges to the Texas law, including in Texas state courts,” indicating that the litigation on the Texas heartbeat law might very well be far from over.

For their part, the four dissenting justices—Roberts and Justices Elena Kagan, Sonia Sotomayor, and Stephen Breyer—focused instead on how the law appeared to insulate the state from responsibility for implementing and enforcing a new abortion regime and would have granted relief to give the courts time to consider whether a law could shield a state from responsibility for its laws in the way the Texas heartbeat law had.

In a separate opinion by Breyer, joined by Sotomayor and Kagan, the Supreme Court’s liberal bloc also stressed that the court’s previous rulings on abortion not only established its constitutionality, but that the state’s delegation of that enforcement to private individuals threatened to invade a constitutional right sufficient to threaten imminent harm, and therefore support a grant of emergency relief.

In her own blistering dissent, Sotomayor called the opinion “stunning,” and accused the five conservative justices of burying their “heads in the sand” while silently acquiescing “in a State’s enactment of a law that flouts nearly 50 years of federal precedents.”

Time will tell how litigation surrounding the Texas heartbeat law will play out, but the Supreme Court’s ultimate ruling in the upcoming term’s Dobbs v. Jackson Whole Women’s Health is sure to have a significant impact on the question of whether—and how—states may legislate on abortion by prohibiting the same before a baby is viable.

Protect in Law, Welcome in Life

Every day across the country, women face the reality of an unplanned or challenging pregnancy. But many Americans across the country are working to help them, believing that women and children deserve better than abortion.

Toward that goal, a robust array of women’s health centers and medical professionals offer women a full range of medical services and compassionate, life-affirming care. For example, perinatal hospice and palliative care facilities provide families with an alternative to abortion in cases of a life-limiting diagnosis.

These options are increasing in popularity as awareness and availability expands, allowing families to affirm the dignity of their child’s life and receive specialized support and guidance in anticipation of loss.

In 2006 there were only 40 formal perinatal hospice programs at medical centers throughout the country; just 10 years later that number burgeoned to 206.

Thousands of pregnancy resource centers across the country—which greatly outnumber abortion clinics—have mobilized to provide health services, education, supplies, counseling, and compassionate options such as adoption referrals to women experiencing an unplanned or unwanted pregnancy. In 2019, these centers served nearly 2 million people and provided $266 million worth of services and assistance.

Science demonstrates that human life begins at conception, and knowledge of prenatal development affirms the humanity of unborn children. Heartbeats can be detected by roughly six weeks. A baby can move in the womb around eight weeks.

The following week, all basic physiological features are present. At 10 weeks, a baby begins to form hair and fingernails. A baby may hiccup at 11 weeks. At 12 weeks, a baby can sense stimulation from outside the womb, and has the capacity to feel pain.

From the moment of conception, every person possesses inherent dignity and worth. Our humanity doesn’t depend on our age, our stage of development, or our abilities.

Since the Supreme Court created a right to abortion on demand in 1973 with Roe v. Wade, medical technology has evolved significantly to let all women see the reality that their babies are humans, worthy of legal protection.

For too long, the Supreme Court’s arbitrary and unworkable abortion jurisprudence has been a barrier to states enacting laws that are rooted in modern science, not frozen in time and penned in by the available science in 1973. In the decades since, millions of Americans and policymakers have worked to advance public policy that reflects evolving medical science grounded in the principle that the law should protect human life.

The Texas Heartbeat Act isn’t the first time pro-life policymakers take a bold step to challenge the status quo, and it won’t be the last.

This article was updated to attribute a quote to all five conservative members of the Supreme Court which was previously attributed to Chief Justice John Roberts.