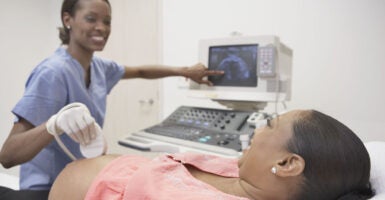 Abortion advocates across America are outraged about a Texas law that bans abortion when an unborn baby’s heartbeat is detected. (Photo: ER Productions Limited/Getty Images)

The Supreme Court ruled in a 5-to-4 decision not to intervene and prevent the Texas Heartbeat Act from being enacted, although it’s already being challenged at the federal level and could be brought again to the Supreme Court.

The left’s visceral reactions, which range from ignorant to unhinged, show how much it esteems killing babies in Texas instead of protecting them.

First, let’s look at some of the most deranged reactions from commentators, journalists, and other influential people on social media.

Above the Law, a widely read and respected legal website, tweeted, “Roe v. Wade just got functionally overturned in Texas. Too somber to put a snarky twist on.”

Above the Law seems too upset to make any informed commentary, provide an explanation, or even tell a snarky joke. I am guessing if Texas passed a law that banned guns, there would be plenty of cheers and jeers to go around.)

The Rev. Raphael Warnock, the senior pastor of Ebenezer Baptist Church in Atlanta, tweeted, “The extreme abortion law in Texas is exactly why we need to keep a Senate with the power to appoint Supreme Court justices that respect a woman’s right to choose.”

Glenn Kirschner, a legal analyst for NBC and MSNBC, compared the law to segregation in schools. He tweeted, “The Supreme Court refused to stop a Texas abortion law from going into effect. The law DIRECTLY VIOLATES the precedent of Roe v. Wade. SCOTUS just signaled state governments that they no longer need to obey Supreme Court precedent. What’s next Texas? Separate-but-equal schools?”

Steven Mazie, who covers the Supreme Court for The Economist, called the law “uniquely Draconian.”

Vice President Kamala Harris called the ban an “all-out assault on reproductive health.” The only assault in the abortion industry is the concerted, dual effort to discourage women from raising their own children and to abort their babies.

Former U.S. Rep. Robert “Beto” O’Rourke, who ran for president in 2020, called the law “an attempt to legalize harassment.”

Jill Filipovic, a feminist, writer, and lawyer, wrote, “The law allows private misogynist busybodies to sue anyone who ‘aids and abets’ an abortion—as if abortion were a crime and not a fundamental right—after a fetal heartbeat can be detected, which happens at roughly six weeks of pregnancy.”

Many news writers and personalities are so upset that they’re getting some of the facts wrong about the law, spreading disinformation about it.

“[The Texas abortion law] means you can sue an Uber driver who drives someone to an abortion clinic,” NBC News correspondent Julia Ainsley said. “These are laws stricter than what we have in place for someone who would drive someone who is about to commit an act of terrorism.”

The idea that anyone could be sued, including the Uber driver who drives a woman to an abortion clinic, is plain false.

What about the Uber driver who drives a woman to an abortion clinic or the therapist who discovers her client wants an abortion, has planned an abortion, or has even had one?

Pojman said a person would have to “knowingly violate the law.” The Uber driver, unless he or she is very familiar, would not knowingly be violating the law, Pojman clarified.

Similarly, Spike Cohen, the Libertarian Party’s nominee for vice president of the United States in 2020, tweeted that the law “encourages snitching.”

A clear reading of the law shows there is a potential fine for breaking the law, just like there are fines for breaking all kinds of other laws. To say that Texans are now encouraged to snitch on women who have had abortions is a stretch, to say the least.

Since the Supreme Court legalized abortion in Roe v. Wade, abortion has been a hot-button issue for the left and right for different reasons. The left’s unhinged, ignorant, bizarre reactions to a law that protects the lives of the most vulnerable Texans demonstrate that abortion will always be an issue of utmost importance to it, no matter that it literally destroys women and children.