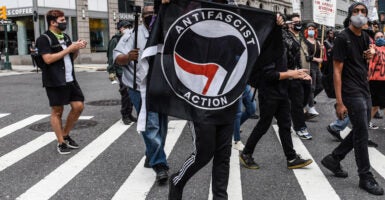 Left-wing protesters, some of them affiliated with Antifa, stage a counterprotest against right-wing demonstrators on July 25 in New York City. News reports of such protesters are often far more sympathetic to the left than to the right. (Photo: Stephanie Keith/Getty Images)

Reporters like to imagine themselves as the nation’s most powerful defenders of democracy, and on occasion, project themselves as enforcers of political civility.

On Aug. 25, Reuters investigative journalist Aram Roston profiled Nicole Armbruster, a self-proclaimed “anti-fascist” who is putting her body “on the line” against fascism and racism.

They call this “rare insight” into this movement, but instead, it’s just letting a violent radical activist explain herself.

The headline under Armbruster’s picture is “American Antifa: A woman’s journey from Girl Scout to anarchist street warrior.”

Is that an atypical journey? Or is it where the Girl Scouts are aiming these days?

Roston churned up the sympathetic Scouting angle: “Even as she engaged as an Antifa activist, she worked for six years as a day camp coordinator for the Girl Scouts of America National Capital Region. She’d been a Scout herself as a girl and can still recite the ‘God and Country’ creed. Over the years, she has worked as a children’s camp director, nonprofit fundraiser and swim coach.”

“Camp,” she said, “is such an important part of kids’ growth.” Did she teach them street violence?

We’re told Armbruster was “born to a well-off family in suburban New York,” and it’s surprisingly common that these angry revolutionaries grew up comfortably in the suburbs. She engaged in activism at the expensive private enclave known as St. Lawrence University in northernmost New York.

“Professor Kenneth Gould, a sociologist now at CUNY Brooklyn, was on that faculty, and recalled Armbruster as a sharp student and ‘far-left progressive.’ Her honors thesis focused on the ‘organizational structures’ of protests against the Free Trade Agreement.” Professors incubate far-left radicals on campus with their “social justice” teachings.

Armbruster told her supportive Reuters reporter that “the seeds of her dissent” were planted “when she learned about World War II and Hitler as a child,” and “she developed a revulsion for Nazis, fascists, and state wrongdoing.”

She said, “My family is from Germany. And you learn all the horrible things.”

This led to her aspiration to not only “deplatforming” her enemies, but hurting them. “You can embarrass Nazis, which makes it harder for them to recruit,” she said. “You can beat them up, and then they’re embarrassed.”

Her best friend cracked they like to deplatform with “punching or kicking.”

Reuters doesn’t avoid the point that Armbruster has a long arrest record, but it’s very common for her violent actions to be dismissed by judges.

Antifa hates former President Donald Trump, so that makes it great. “Antifa, short for ‘anti-fascist,’ achieved a mythic and mysterious stature in Trump’s America, serving as a whipping boy for the president and his supporters.”

Reuters touted how this year, the Department of Justice (ahem, under President Joe Biden) declared that “white supremacist groups, not Antifa, stand as the most significant domestic terror threat to the country.”

That only underlines that the Democrats as a party claim to abhor “insurrection,” and then support it when it marches under banners of “anti-fascism” and “Black Lives Matter.”

That goes double for liberal media outlets, which undercut their boasts for democracy and civility every time they roll out the red carpet for “anarchist street warriors.”