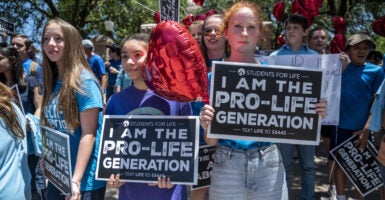 Texas’ highly disputed abortion ban went into effect early Wednesday morning, uninhibited by any action from the U.S. Supreme Court. Pictured: Pro-life protesters stand near the gate of the Texas State Capitol at a protest May 29 in Austin. (Photo: Sergio Flores/Getty Images)

Abortion providers had filed emergency requests to block the enforcement of the Heartbeat Act (SB 8), which bans abortions after the unborn baby‘s heartbeat can be detected. The Supreme Court did not intervene, though it still may do so.

“It’s past midnight now in Texas,” Live Action founder and President Lila Rose tweeted early Wednesday morning. “The Heartbeat Law has gone into effect. Every child with a detectable heartbeat is legally protected from being killed by abortion. Thinking of all the inestimably precious lives that will be spared today & their new lease on life.”

“An amazing day,” she added.

On Tuesday, Travis County District Court Judge Amy Clark Meachum granted a temporary restraining order in response to a lawsuit from attorney Michelle Simpson Tuegel. Meachum’s order enjoined “the Injunctive Defendants, and any and all parties in active concert and participation with them, from instituting any private enforcement lawsuits against Plaintiff under SB8.”

“What ultimately happens to this law remains to be seen,” CNN Supreme Court analyst and University of Texas Law School professor Steve Vladeck said, “but now through their inaction the justices have let the tightest abortion restriction since Roe v. Wade be enforced for at least some period of time.”

The law, which makes exceptions for medical emergencies but not in cases of rape or incest, has raised the ire of pro-abortion advocates as it allows “any person” to sue doctors, abortion clinics, or anyone who “knowingly engages in conduct that aids or abets the performance or inducement of an abortion.”

Center for Reproductive Rights President Nancy Northrop warned Monday that if the law is not blocked within the next two days, “Texas politicians will have effectively overturned Roe v. Wade.”

“Texans, like everyone else in this country, should be able to count on safe abortion care in their own state,” Whole Woman’s Health CEO Amy Hagstrom Miller said in a Monday statement. “No one should be forced to drive hundreds of miles or be made to continue a pregnancy against their will, yet that’s what will happen unless the Supreme Court steps in.”

“Undoubtedly, today is a historic and hopeful day,” Youman said. “Texas is the first state to successfully protect the most vulnerable among us, preborn children, by outlawing abortion once their heartbeats are detected. A fetal heartbeat is a clear and scientifically acknowledged sign of human life.”

“Human beings are worthy of protection at all phases of development and the importance of a growing human in the womb cannot be undermined in good conscience,” she continued. “We are confident in SB 8’s constitutionality. Legal challenges to SB 8 are groundless and will ultimately fail.”