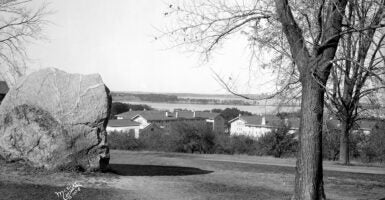 Seen here on Nov. 20, 1926, Chamberlin Rock was moved about three weeks ago from its prominent location on the University of Wisconsin at Madison campus. It was deemed “racist” by some students because of a name it was called once nearly 100 years ago in a local newspaper. (Photo: Angus McVicar/Wisconsin Historical Society/Getty Images)

Can a rock be racist?

It can be, according to student activists at the University of Wisconsin at Madison. The school in early August moved a giant boulder that had sat prominently on campus for nearly a century to honor geologist and former university President Thomas Chrowder Chamberlin.

“This moment is about the students, past and present, that relentlessly advocated for the removal of this racist monument,” said Juliana Bennett, a student and campus representative on the Madison City Council. “Now is a moment for all of us [black, Indigenous, and people of color] students to breathe a sigh of relief, to be proud of our endurance, and to begin healing.”

Chamberlin was never accused of racism or anything else inappropriate. Instead, the massive 42-ton boulder was removed because of a single line in a local newspaper nearly 100 years ago in 1925 that referred to the rock using an offensive anachronism.

Fred Lucas and Jarrett Stepman join “The Daily Signal Podcast” to discuss the incident and the broader movement to remove politically incorrect statues and monuments around the country.