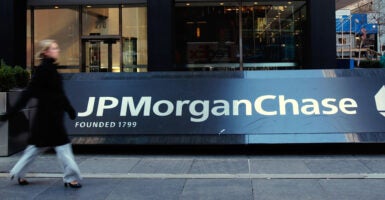 As much as corporate leaders undoubtedly care about black Americans, they would never trust them to just take the money and spend it properly. Pictured: The JPMorgan Chase building in midtown Manhattan. (Photo: Chris Hondros/Getty Images)

According to a new report from The Washington Post, America’s corporations have committed at least $49.5 billion to the cause of “racial justice” since the George Floyd murder last year riveted our national attention on race.

This amounts to a little over $1,100 for every black man, woman, and child in America.

But we’re not talking about corporate America, despite its deep concern for racial justice, just simply giving black Americans cash. As much as corporate leaders undoubtedly care about these black citizens, they would never trust them to just take the money and spend it properly.

These corporate executives nationwide have concluded that they can justify taking a huge chunk of their shareholders’ funds—an amount equal to the entire economy of the state of Alaska—and spend it in a way that will produce more racial justice.

It is reasonable to ask why they believe they can achieve this.

It goes against all experience we have had with government.

The federal government has been spending trillions since the War on Poverty began in the 1960s—$20 trillion, by some estimates—and the incidence of poverty over these years has hardly budged.

Apparently, these corporate executives feel they have some insight that has eluded politicians all these years.

A large percentage of these funds is earmarked for loans and investments in housing and business loans.

According to the report, $28 billion flows from a pledge by JPMorgan Chase to move 40,000 families into home ownership over the next five years.

But, again, special loans and grants to encourage minority home ownership are nothing new.

Government has been doing this for years, causing more damage than good.

Most should recall that we had a major financial crisis in our country in which we saw a collapse in financial markets in 2008 that was the worst since the Great Depression.

According to research at the American Enterprise Institute, this collapse was driven by the bursting of a highly inflated bubble in housing prices, the result of widespread deterioration in lending standards driven by government affordable housing goals and mandates.

Black citizens, who these government programs were designed to help, were disproportionately hurt when housing prices collapsed as a result of the plethora of bad loans.

The great mystery is why the principles that made and make our country great are nowhere to be found in the various ideas and programs being promoted with this vast sum of funds.

Why have so many in corporate America signed off on left-wing dogma that American principles—principles of protection of life, of liberty, of property—are the problem rather than the solution?

A healthy portion of American blacks are doing very well because of these American principles.

Those left behind need liberation from government control of their lives. Fewer government-created ghettos from federal housing programs, more freedom from failing government schools and from broken government entitlement programs such as Social Security.

I started promoting the idea 25 years ago of releasing low-income earners from the Social Security payroll tax and allowing them to invest those funds in a personal retirement account. Back then, the Dow Jones Industrial Average stood at 10,000. Today, it stands at 35,000.

The very naysayers I heard back then are the ones bleating today about unfairness and the wealth gap.

Rather than betraying the tradition of free enterprise capitalism that built corporate America, U.S. corporations should be promoting these values. This is the path to more prosperity, more justice, for all Americans.