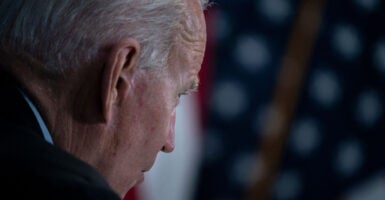 Either President Joe Biden ignored the advice of his military advisers, or his advisers are as incompetent as the president. (Photo: Brendan Smialowski/AFP/Getty Images)

President Joe Biden must have ignored sound military advice in abandoning Afghanistan. No person who graduated boot camp would have planned a military operation like this.

There are old military adages that just can’t be ignored: “Plans are useless, but planning is everything.” “No plan survives contact with the enemy.” “They enemy gets a vote.” It looks like Biden paid as much attention to these as the toddler in the emergency room respected the warning, “Don’t eat the Tide Pods.”

Here is a short list of where military advisers had to have parted company with Biden. If they did not, then they were as incompetent as the president.

Winston Churchill once said the only thing worse than fighting with allies was fighting without them. Biden decided on a “no plan” plan. The U.S. would just bug out and then, worst case, Afghanistan would collapse afterward. That necessitated no coordination with the Afghans, surrounding countries, or NATO allies. This resulted in chaos. The fight at the 55 Days at Peking was better organized.

2. Give Up High Ground

Today we are not all just whistling Dixie because the Union Army refused to yield the high ground at the battle of Gettysburg. In Kabul, the high ground was the U.S. air base at Bagram. The base was abandoned so there would be more troops to cover the embassy and the airport without putting more boots on the ground in Kabul. That was as risky as fighting the Battle of Britain without airplanes.

Military operations are supposed to take options away from your enemy. The U.S. became totally dependent on the good graces of the Taliban for the evacuation at the Kabul airport. This would have been like asking the Nazis to plan the D-Day invasion.

Who can forget President George W. Bush giving a thumbs-up under than iconic banner and then struggling through a bloody insurgency in Iraq?

It was foolish for Biden to be touting a “greater success than the Berlin airlift.” This was like waving a red flag in front of the bull, making the airport an even more tempting target for terrorists and deepening the humiliation of the U.S. retreat.

5. End an Endless War by Starting Another

Wars are not ended by turning your back on the enemy. One would think Biden would have learned that when he right-seated for President Barack Obama in Iraq, Syria, and Libya.

Biden very likely ended this endless way by triggering a new global war on terror, not to mention hamstringing the U.S in the competition with China over South Asia.

The fact is the U.S. influence in Afghanistan is weaker today than when President Bill Clinton blindly lobbed cruise missiles at Osama bin Laden.

No military adviser worth his stars would have suggested any of these moves, which compromised sound military action. If nothing else, what was proved conclusively last week is that Biden is an appalling commander in chief.

This commentary was first published on foxnews.com.