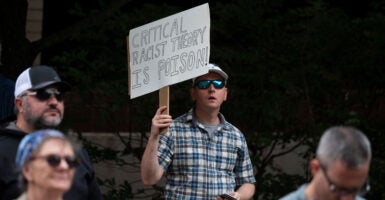 A man holds up a sign during a rally against critical race theory being taught in schools at the Loudoun County Government Center in Leesburg, Virginia, June 12. (Photo: Andrew Caballero-Reynolds/AFP/Getty Images)

Is your child being indoctrinated by their school and teachers?

This is what a report by North Carolina Lt. Gov. Mark Robinson, a Republican, tried to uncover. Robinson’s recently published “Indoctrination in North Carolina Public Education Report” highlighted incidents of both parents and teachers who believe that their school is foisting indoctrination on students or faculty.

Robinson explained why he thought a report like this was necessary.

“This is an attempt to stop the abuse of the teaching profession by a few who are using that profession to put undue pressure on young minds to accept their way of thinking,” Robinson said at a news conference, according to The News & Observer, a North Carolina-based newspaper. “That’s what this is. It is not an attack on teachers. The overwhelming majority of our teachers are hardworking folks who do a fantastic job every day.”

The report included many personal stories of parents, teachers, and students complaining of indoctrination or intimidation taking place in North Carolina schools over issues like gender identity and critical race theory.

Here are six examples highlighted in the report, which included many more. The names of those who submitted their stories were left out of the report.

A parent in Wake County submitted a letter saying that their child, who was a high school junior, was receiving left-wing indoctrination in multiple classes. The student was told in history classes that if “you were white and Christian, you should be ashamed,” according to the letter.

The parent said that both teachers and students at the schools are forced to engage in indoctrination about race and gender through the school’s curriculum.

“Every single book/passage reading in AP English class is about white supremacy/privilege,” the parent wrote.

In addition, the parent’s child had been conditioned to merely give the answers the teachers wanted rather than what he really believed.

“My child has figured out that he/she needs to answer any opinion questions the way the teachers want the questions answered, and not give an actual/honest opinion on a topic,” the parent wrote. “An actual opinion that doesn’t conform to the ‘woke’ culture would be criticized rather than thoughtfully discussed.”

A parent of a student at Virtual Academy said that their daughter chose to stay on “mute” most of the year due to intimidation by the teacher. The parent said that students who agreed with the teacher’s views were praised and rewarded while those who disagreed were rebuked.

“Those that agree with [the teacher’s] point of view got positive attention. Those that did not, such as our daughter, who had the courage to join the conversation that day, were told in chat to ‘back down,’ ‘calm yourself,’ ‘some are going to try to make it hard on the majority of us who want equality for all,’” the parent wrote.

The parent said that they want their daughter to be engaged and form her own opinions, but it’s difficult when the teacher makes it clear that only a certain point of view is acceptable:

I want my child to learn other’s opinions. Most of all, I want her to form her own views. Even if they differ from mine or someone else’s. She did not feel comfortable to join in most conversations before or after. I want her to talk in class, to be engaged if she chooses. To stand up for her beliefs. It’s difficult enough to be ganged up on, but when the teacher engages in such behavior, it seems it’s meant to silence those opinions that differ.

In addition, the parent said they have been unwilling to say anything to the teacher or school principal for fear of their daughter facing “backlash” in future classes taught by that teacher.

A student counselor at a North Carolina middle school wrote about being instructed to promote gender transition for children. The counselor said they were given a “support plan” at a meeting for when a student declares they want to “transition their gender.”

The counselor wrote that they were instructed in the proper procedure to change to the student’s name and preferred pronouns and told not to notify parents about what the child was doing.

The counselor explained that these instructions directly violated their personal and religious views.

“As a Christian, this practice puts me in direct conflict with my religion,” the counselor wrote. “As a parent, it terrifies me that a child can pursue transitioning with such liberty without the loving guidance of their parents.”

The counselor said that they had avoided confrontation with the school administration out of fear of reprisal but felt they could not continue to carry out the policy due to its conflict with their “beliefs, morals, and conscience.”

English lessons in a sixth grade class in one North Carolina school were filled with left-wing buzzwords, according to a parent. The parent wrote that “all of the words my child was learning were critical race theory ‘buzz’ words such as: bias, discrimination, equity, inequity, racist, etc.”

These words were all taught in the context of “painting white people as the bad people who perpetuate these things,” the parent wrote.

This wasn’t the first incident, according to the parent, who wrote that the school’s English classes continually cover the same topics revolving around social justice ideology and include little about “grammar and composition.”

“I have reached out to [the teacher] before with my concerns and the only response I received from her was that she’s sorry if any of the material made me uncomfortable but it’s the approved curriculum,” the parent wrote.

The “straw that broke the camel’s back” according to a North Carolina parent, was when “a white male teacher made his class of 20 students (including my daughter) play the ‘privilege game.’”

The parent explained how this “game” worked in the classroom.

“All students line up horizontally and then the teacher calls out certain things and you take a step forward or backwards accordingly,” the parent wrote.

The teacher would ask students if they had ever been discriminated against because of their skin color or had divorced parents and would take steps forward or backward accordingly.

“By the end of the exercise, a white male was in front and a black female was in the back with everyone else in between,” the parent wrote.

The parent of a fifth grade student at Chantilly Montessori Elementary, a magnet school in the Charlotte Mecklenburg School District, wrote that a teacher refers to students as “my little comrades” and “my little activists.”

The teacher constantly talks about political events in a biased manner, the parent wrote.

“For example, in discussing the January 6 Capitol incident, she told the students, ‘Trump promoted violence,’” the parent wrote. “She’s openly supportive of [Black Lives Matter] (wearing stickers on her shoes) and the LGBTQ community.”

The parent wrote that these political references are “ongoing/daily” issues.