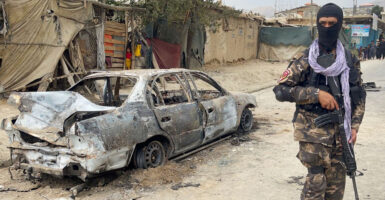 A view from the scene after at least five rockets were fired Monday at Kabul's Hamid Karzai International Airport, only to be intercepted by U.S. defense systems at the airport. (Photo: Haroon Sabawoon/Anadolu Agency/Getty Images)

The U.S. on Monday intercepted as many as five rockets launched at the airport in Kabul where evacuation efforts are ongoing.

The White House said national security adviser Jake Sullivan and chief of staff Ron Klain briefed President Joe Biden on the attempted attack on the airport in Afghanistan’s capital. Another official told Reuters that there were no initial reports detailing any U.S. casualties.

“The president was informed that operations continue uninterrupted at HKIA [Hamid Karzai International Airport], and has reconfirmed his order that commanders redouble their efforts to prioritize doing whatever is necessary to protect our forces on the ground,” White House press secretary Jen Psaki said in a public statement.

The rocket attack comes one day after a U.S. drone struck an explosive-filled vehicle in route to Kabul’s airport and four days after an ISIS-K suicide bomber killed 13 American troops and some 170 Afghan nationals.

The attack on the airport also happened one day before the American military was scheduled to fully withdraw from Afghanistan after nearly 20 years of war following the 9/11 terrorist attacks.

The U.S. had warned Saturday of a “specific, credible threat” near the airport, urging Americans remaining to evacuate the premises as soon as possible. Biden also said that day that another attack in the Afghan capital was “highly likely.”