CDC Should Revise Its Guidance Mandating Masks at School 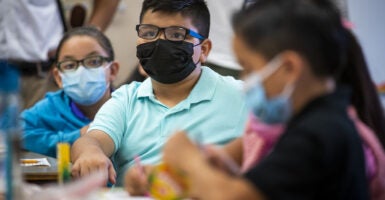 The Centers for Disease Control and Prevention recommends “universal indoor masking of all students age 2 and older.”

There’s just one problem: The leading study on which the CDC bases this recommendation found that the COVID-19 infection rate in schools requiring students to wear masks “was not statistically significant compared with schools where mask use was optional.”

This gap between science and CDC recommendations is hardly unique.

The health agency’s policy notices often rest on shaky foundations. That is especially true when it comes to schools.

The Centers for Disease Control and Prevention should revise its guidance on the masking of schoolchildren and clearly communicate that its current guidance isn’t backed by sound evidence.

The CDC study, published in May in the agency’s Morbidity and Mortality Weekly Report, involved 91,893 students enrolled in 169 schools in Georgia. The study considered 566 cases of COVID-19 diagnosed among those schoolchildren, or 3.1 cases per 500 students.

The authors of the study examined the effects of various mitigation efforts, including making ventilation improvements, spacing desks 6 feet apart, masking teachers, and masking students, whether voluntary or mandatory.

The study found that mask requirements for teachers and staff and “ventilation improvements”—such as opening windows—had a statistically significant effect. Other interventions did not.

“These findings cast doubt on the impact of many of the most common mitigation measures in American schools,” David Zweig wrote in New York magazine. “Distancing, hybrid models, classroom barriers, HEPA filters, and, most notably, requiring student masking, were each found not to have a statistically significant benefit.”

“In other words,” Zweig wrote, “these measures could not be said to be effective.”

Although this study is by far the largest and the one on which the CDC appears to rely most heavily, Zweig examined 17 different studies cited by the agency in its K-12 masking guidance.

“Not one study,” he wrote, “looked at student mask use in isolation from other mitigation measures or against a control. Some even demonstrated that no student masking correlated with low transmission.”

Don’t tell that to the CDC.

“Universal and correct mask use is a critical prevention strategy CDC recommends that school prioritize regardless of vaccination status for in-person learning,” the agency’s study of Georgia schools decrees.

Zweig spoke with several scientists who criticized the CDC’s misuse of its findings.

“I’m not aware of any studies that show conclusively that kids wearing masks in schools have any effect on their own morbidity or mortality or on the hospitalization or death rate in the community around them,” Elissa Schechter-Perkins, director of emergency medicine and infectious disease management at Boston Medical Center, told Zweig.

Writing more generally about the CDC’s basis for mask mandates, Vinay Prasad of the University of California, San Francisco was more direct: “The CDC cannot ‘follow the science’ because there is no relevant science.”

Unlike the practice in many other developed countries, the CDC recommends masking children as early as age 2, a point on which the American Academy of Pediatrics agrees.

The American Academy of Pediatrics did not respond to multiple requests from Zweig to supply evidence for its recommendation. The CDC, according to Zweig, responded by reiterating its policy recommendation “and included links to unrelated materials on vaccines and a recent outbreak among adults.”

This isn’t the first time the CDC has issued ill-founded recommendations on in-person learning. For nearly a year, the agency advised schools to keep desks at least 6 feet apart. Many schools that sought to conform to the guidance found that it made full-time, in-person learning impracticable.

“Six feet doesn’t protect teachers,” Ashish Jha of Brown University wrote of the CDC policy, “but it does keep kids out of school.”

The agency abruptly shifted course in March, declaring that desks need be separated by only 3 feet instead of 6. The CDC’s revised “science brief” March 19 did not cite a single classroom-based study recommending that desks remain 6 feet apart. Instead, it mentioned a 1982 study that found meningitis spread more easily in classrooms when desks were separated by less than 40 inches.

Like its erstwhile guidance on spacing desks in classrooms, the CDC’s ill-founded edict on student mask mandates complicates school openings. Parents who assume the agency’s guidance is well-grounded in science clash with those who object to mandates.

The Centers for Disease Control and Prevention created this controversy. It should help quell it.

Accurately reporting its own finding that there is no statistically significant difference between voluntary and mandatory masking of schoolchildren would be a good start. The CDC should communicate this point clearly and emphatically and revise its guidance accordingly.

Some parents still may insist that their children attend only schools that require students to wear masks. But more honest communication by the CDC would clarify that this is a clash over parental preferences, not over science.

States should honor these preferences by allowing parents to exercise school choice options if they disagree with their local public school’s policies on masks, finding them to be either too lax or too rigid.

Following the lead of states such as Florida and Arizona, parents should be able to take their child’s share of per-pupil funding to a learning environment that reflects their health and education needs.