The View From Omaha Beach 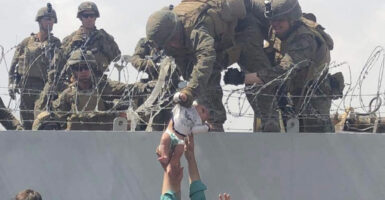 For Americans who played a role in the D-Day landings, the catastrophe now unfolding in Afghanistan would have been unimaginable. Pictured: A U.S. Marine lifts an infant over a barbed wire fence Aug. 19 at Hamid Karzai International Airport in Kabul, Afghanistan. (Photo: Omar Haidiri/AFP/Getty Images) 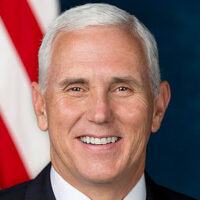 NORMANDY, France—I fulfilled a lifelong aspiration this past week by traveling with The Heritage Foundation to visit the Normandy beaches where, in 1944, tens of thousands of American servicemen braved the barrage of the relentless Nazi war machine to liberate Europe from tyranny.

There are few moments in history when the fate of nations truly hangs in the balance. Fewer still, when the stakes are human freedom itself. June 6, 1944, was one of those days.

Witnessing the unfolding tragedy of the Biden administration’s disastrous withdrawal from Afghanistan, I could not help but reflect on the differences between American civilian leadership then and now.

The story of D-Day is one of bravery and brilliance. Meticulous planning made it possible to launch the largest armada in history. We had the incomparable leadership of Gen. Dwight D. Eisenhower. Our allies—from Britain to Canada to Poland—fought alongside us.

But above all, there was the courage of our servicemen who charged those beaches.

Standing on the bluff overlooking Omaha Beach, I couldn’t help but recall the 75th anniversary of D-Day in 2019. I had the privilege of speaking in Bedford, Virginia, the hometown of the Bedford Boys—44 young servicemen who never strayed far from home until they became part of the 116th Infantry and stormed Omaha Beach.

On D-Day, 20 Bedford Boys fell in the defense of freedom. And today, the National D-Day Memorial stands in their hometown in honor of their sacrifice and that of all who gave their lives on that day.

In 1984, President Ronald Reagan asked us to remember the U.S. Rangers who took the cliffs of Pointe du Hoc, to “continue to stand for the ideals for which they lived and died,” and to be “strengthened by their courage.”

I never have doubted the ideals of our country, or the courage of our armed forces. Today, though, I doubt the judgment of their leaders, especially their commander in chief, President Joe Biden.

For the Americans who played a role in the D-Day landings—from the highest-ranking officer to the least experienced enlisted man—the catastrophe now unfolding in Afghanistan would have been unimaginable.

D-Day was made possible by careful planning. With the assistance of our British friends, we built pipelines under the ocean, vast artificial breakwaters, and landing craft by the score. The entire armada of liberation was organized down to the final bolt on the last Jeep.

The Biden-Harris administration was warned that the withdrawal of U.S. forces ran a terrible risk of handing victory to the Taliban. For all intents and purposes, it appears the administration planned nothing. Now they are improvising a tragedy.

Our military leaders chose the day of Western Europe’s liberation with great care, with consideration for tides, moonlight, and weather. In Afghanistan, it was within our power, as the Trump-Pence administration proved, to draw down U.S. forces slowly while preserving the fighting power of the Afghan army. But the Biden administration set itself an utterly arbitrary deadline in the midst of the annual fighting season, then marched by its own drumbeat to disaster.

Today, our soldiers are not facing down hostile armies and silencing the guns. They are catching babies being tossed to them over barbed wire, while thousands of Americans are at the mercy of evil men who harbored those who launched the attacks of 9/11.

The triumph of D-Day began at the top. Eisenhower knew that we could not win the victory alone. He worked hard to bring unity to the allied armies under his command. Above him stood President Franklin D. Roosevelt and British Prime Minister Winston Churchill, steely leaders determined to see the fight through.

Where is that unity and determination today? With its chaotic withdrawal from Afghanistan, the Biden administration has infuriated the allies who willingly joined us in battle. It has abandoned American citizens who remain trapped in and outside of Kabul. And it has betrayed countless Afghans who risked their lives to help us.

This administration came into office pledging outreach to America’s allies. In six months, it betrayed the Afghans, ignored the entreaties of the British and our other NATO allies, destabilized the region, and emboldened America’s enemies, placing American lives at risk.

The first rules of foreign policy are simple: Stand with your allies. Stand up to your enemies. The Biden administration has done the reverse. It abandoned our allies and handed victory to our enemies.

Since the outset of the Biden administration’s disastrous withdrawal from Afghanistan, many are wondering whether the United States will remain freedom’s indispensable nation.

That same question was asked 77 years ago, and it was answered here on the beaches of Normandy. And that question has been answered ever since by the generations of Americans who stepped forward to serve in the uniform of the United States to this very hour.

Today our hearts grieve for the brave Americans lost and injured in the terrorist attack at Kabul’s international airport. We “mourn with those who mourn and grieve with those who grieve, but we do not grieve like those who have no hope”—because our faith gives us hope and heroes give us hope.

America is the leader of the free world and the armed forces of the United States are the greatest force for good the world has ever known.

No failings by this administration ever could diminish what our armed forces accomplished in Afghanistan these past 20 years, any more than they could diminish the valor of the American soldiers who stormed the beaches of Normandy.

The heroes of Operation Enduring Freedom and Operation Freedom’s Sentinel brought countless terrorists to justice, made America safer, and earned a place of honor in the history of our nation.