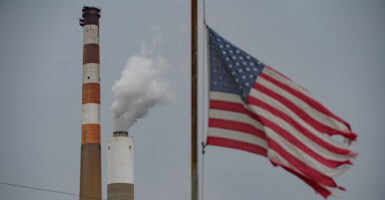 September is shaping up to be a critical month for the future of anti-carbon measures that have drawn bipartisan opposition in the Pennsylvania General Assembly. Pictured June 7: The coal-burning GenOns Cheswick Power Station, about 15 miles northeast of Pittsburgh, produces 637 megawatts of electricity for the region. (Photo: Jeff Swensen/Getty Images)

If an independent panel votes down proposed regulations to limit carbon dioxide emissions in Pennsylvania, state lawmakers will have added leverage to prevent Gov. Tom Wolf from joining a multistate initiative to address climate change.

However, if the panel approves the regulations in a meeting Wednesday, Wolf’s executive agencies likely would gain latitude to move forward with plans to implement cap-and-trade rules in step with 11 other states in New England and the mid-Atlantic that are part of the Regional Greenhouse Gas Initiative.

Either way, September is shaping up to be a critical month for the future of carbon taxes and other anti-carbon measures that have drawn bipartisan opposition in the Pennsylvania General Assembly.

Since the commonwealth is No. 2 only to Texas in oil and gas production, according to government figures, the final decision on the cap-and-trade proposals will have significant ramifications across state lines.

Even if Pennsylvania’s five-member Independent Regulatory Review Commission votes yes on the carbon dioxide regulations, the state’s Office of Attorney General has 30 days to review their legality.

The General Assembly also could adopt a resolution opposing the regulations, despite the commission’s OK. Since legislative committees already have expressed disapproval of Wolf’s climate regulations, such action is likely.

The Pennsylvania Department of Environmental Protection cannot publish a regulation while the General Assembly considers such a concurrent resolution designed to block it. However, Wolf, a Democrat, could veto the resolution, forcing lawmakers to muster the votes to override.

‘No Legal Authority to Table’

“We’re very lucky in Pennsylvania to have such a thorough review process,” David Sumner, the commission’s executive director, said in a phone interview with The Daily Signal.

“There’s an opportunity for public input, there’s an opportunity for legislative input,” Sumner said. “You’ll also be hearing from the agencies. This process gives everyone a say at the end of the day. As a result, most of the regulations we see are changed, and we believe improved, from the time they are proposed to the time they are implemented.”

Sumner said he expects a full house Wednesday for the meeting in Harrisburg, where advocates and opponents will have their say. The commission previously recommended that the 20-member Environmental Quality Board delay implementing the carbon dioxide regulations by one year in response to lawmakers’ concerns about the legality of executive action under the state’s Air Pollution Control Act and the potential economic costs to Pennsylvania.

In July, however, the Environmental Quality Board, charged with adopting the Department of Environmental Protection’s regulations, voted in favor of rulemaking to implement a cap-and-trade program.

Government regulators in those 11 states compel electric utilities to purchase carbon allowances at quarterly auctions whenever the utilities surpass the cap on carbon dioxide emissions established by the multistate agreement.

Sumner said he expects the commission to take decisive action at the conclusion of the meeting. Four of the five commissioners are appointed by the Legislature and one by the governor.

“We have no legal authority to table anything,” Sumner said of the commission, adding:

If it’s on the agenda, we will vote, and RGGI is on the agenda. If there’s an approval, we’ll deliver an approval order to the [state Environmental Protection Department] and to the General Assembly, and it’s then in the hands of the General Assembly. If the commissioners vote to disapprove, they will likely explain why at the meeting and we will issue a formal order explaining why it was disapproved during the meeting.

Since commissioners are required to consider “comments and actions” of the legislative committees with oversight over energy and environmental policy, Sumner said, he expects that members of the General Assembly will make their voices heard.

The state Senate’s Environmental Resources and Energy Committee on Aug. 18 approved a letter to the Independent Regulatory Review Commission calling on the panel to reject the regulations.

In June, the state Senate passed a bill prohibiting Wolf from joining RGGI without the approval of the General Assembly. The bill passed by a veto-proof margin, with six of Wolf’s fellow Democrats voting with the majority. A similar bill in the House awaits a floor vote.

Lawmakers in both parties who have reservations about Wolf’s executive actions on climate change have argued that the cap-and-trade arrangements and quarterly auctions that figure into the multistate initiative would result in imposition of carbon taxes on residents that only the Legislature has the authority to approve.

“A carbon tax is a major energy and fiscal policy initiative that—if it is to be imposed on Pennsylvania employers and ratepayers—must be approved by the General Assembly,” state Sen. Gene Yaw, the Republican chairman of the Environmental Resources and Energy Committee, said in a press release.

RGGI is a superficial fix, at best.  It does very little to reduce greenhouse gas emissions, [and] moves electric generation to Ohio and West Virginia, all while putting hardworking Pennsylvanians out of work. The RGGI initiative also creates serious constitutional questions of checks and balances between co-equal branches of government.

State Rep. Pam Snyder, a Democrat whose district includes Greene, Fayette, and Washington counties, has said that the Regional Greenhouse Gas Initiative would put Pennsylvania on the “wrong path” while increasing energy costs and eliminating “family-sustaining jobs” in her community.

In a Facebook post, Snyder goes into detail about the potential economic fallout from joining RGGI and from the carbon taxes it would impose on Pennsylvanians.

Neither the governor’s office nor the state Department of Environmental Protection responded to The Daily Signal’s requests for comment on the upcoming commission meeting, the cost of the proposed carbon regulations, and the legality of executive action on climate change without legislative approval.

The Department of Environmental Protection, however, maintains a website detailing environmental, economic, and health benefits that the agency says it expects the Regional Greenhouse Gas Initiative would deliver to Pennsylvanians.

State Rep. James Struzzi told The Daily Signal that some Democrats may join in the effort to prevent executive agencies from acting without a vote in the General Assembly. Struzzi is the lead sponsor of the House version of the bill to prohibit the governor from joining RGGI and imposing carbon taxes without legislative approval.

“We are seeing more and more of my colleagues from the other side of the aisle joining with us because they are seeing the devastating impacts that could come from RGGI,” Struzzi said in a phone interview.

“But they also have concerns about the governor going forward with RGGI without prior legislative approval,” he said. “Democrats who come from areas where energy production is part of the economy in the western part of the state would certainly have concerns.”

A vote hasn’t been scheduled on Struzzi’s bill, but it could come up later in September when the Legislature goes back into session.

If Wolf presses ahead with plans to join the Regional Greenhouse Gas Initiative after a negative vote by the commission, Struzzi said, he envisions a scenario where the governor’s unilateral action could highlight the importance of legislation reaffirming the General Assembly’s constitutional role.

“In our democracy, the General Assembly is the voice of the people; that’s why we were elected,” Struzzi said. “If you have a majority of the General Assembly saying that RGGI is bad for Pennsylvania and the governor and his Department of Environmental Protection do not listen, then that’s simply unacceptable.”

Unlike the other states that are part of the Regional Greenhouse Gas Initiative, Pennsylvania stands out as an energy exporter and producer, Bonner Cohen, a senior fellow with the National Center for Public Policy Research in Washington, told The Daily Signal.

“As the nation’s second-largest natural gas producer, Pennsylvania would be the only member of RGGI that produces baseline energy (available 24/7),” Cohen said in an email, adding:

The rest either import their electricity from other states or Quebec or rely on intermittent wind and solar power. No matter how generous the federal subsidies or how strict the state renewable-energy mandates, wind and solar along with batteries will never meet the demands of residential and commercial users. The result will be energy rationing, higher prices, and serious environmental and public health problems arising from the disposal of wind turbines, solar panels, and back-up batteries—all laden with toxic chemicals—after the end of their short life cycles.  Why would Pennsylvania want to join this world?

If the Independent Regulatory Review Commission approves the carbon regulations Wednesday, the General Assembly will have 14 days to review the final regulation and report out a resolution of disapproval.

The General Assembly then can send the disapproval resolution to Wolf with the expectation that the governor would veto it, and it’s not clear whether either chamber would be able to override a veto.

But if the commission disapproves of the carbon regulations, it will issue an order stating reasons and the Department of Environmental Protection will have 40 days to respond. The department could resubmit the same regulations or modify them with an eye toward accommodating the panel’s concerns.

Once the environmental agency acts, the commission will vote a final time at its next meeting.

No matter what the commission does, the General Assembly could adopt a resolution of disapproval that goes to the governor.

Wolf planned for Pennsylvania to join the climate change initiative beginning next Jan 1. He is set to leave office a little over a year later, in January 2023. Because a Pennsylvania governor may serve no more than two terms, Wolf will not run again.

Gordon Tomb, an energy policy analyst with the Commonwealth Foundation, a free market think tank in Harrisburg, Pennsylvania, told The Daily Signal that he sees a “political agenda” behind the Regional Greenhouse Gas Initiative that could extract a severe economic price from Pennsylvania residents and businesses.

These plants—equipped with modern pollution-control equipment valued at many millions of dollars—make enough electricity for 5 million homes. The economic loss would include 8,100 jobs, $34.3 million in state tax revenues, $3.7 million in local taxes, $539 million in total employee compensation, and over $1 billion in operating expenditures. RGGI would be a forced trade of safe, economic energy sources for an absurd political agenda that will damage people’s lives and not improve the environment one iota.