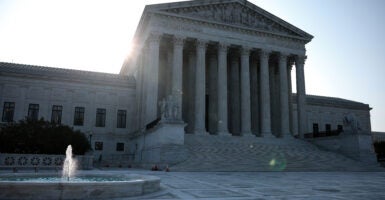 In a 6-3 decision, the high court ruled that the eviction moratorium, which has prohibited landlords from evicting low-income tenants since its implementation in March 2020, would need congressional authorization to be continued. (Photo: Anna Moneymaker/Getty Images)

The Supreme Court ordered the Biden administration on Thursday to stop enforcing the federal eviction moratorium recently extended to October.

In a 6-3 decision along ideological lines, the high court ruled that the moratorium, which has prohibited landlords from evicting low-income tenants since its implementation in March 2020, would need congressional authorization to be continued.

The decision potentially exposes about 12 million Americans, who reported having little to no confidence in being able to make their next rental payment, to imminent eviction.

“It would be one thing if Congress had specifically authorized the action that the CDC [Centers for Disease Control and Prevention] has taken,” the Supreme Court ruling said. “But that has not happened. Instead, the CDC has imposed a nationwide moratorium on evictions in reliance on a decades-old statute that authorizes it to implement measures like fumigation and pest extermination.”

“It strains credulity to believe that this statute grants the CDC the sweeping authority that it asserts,” it continued.

Nearly 7.5 million U.S. households are behind on rent, and approximately 3.6 million say they will likely be evicted in the next two months, according to a Census Bureau survey released earlier this month.

On Aug. 3, the Centers for Disease Control and Prevention extended the moratorium until early October. The new directive was tailored to apply to regions with “substantial and high levels” of coronavirus transmission, or roughly 95% of all U.S. counties.

The White House initially signaled it wouldn’t extend the moratorium beyond its previous expiration date, but the administration changed course after pressure from Democratic members of Congress. Supreme Court Justice Brett Kavanaugh said the previous moratorium may stay in place, but could only be extended with congressional approval in a June order.

“The Biden administration is disappointed that the Supreme Court has blocked the most recent CDC eviction moratorium while confirmed cases of the delta variant are significant across the country,” White House press secretary Jen Psaki said in a statement. “As a result of this ruling, families will face the painful impact of evictions, and communities across the country will face greater risk of exposure to COVID-19.”

The Georgia and Alabama chapters of the National Association of Realtors filed an emergency motion after the CDC extended the moratorium, citing Kavanaugh’s concurrence. The plaintiffs, representing landlords and property owners, also cited remarks by President Joe Biden indicating that the moratorium was extended in order to tie up the court system.

“I can’t guarantee you the court won’t rule that we don’t have that authority, but at least we’ll have the ability to—if we have to appeal—to keep this going for a month, at least,” Biden told reporters. “I hope longer.”

A federal court in Washington upheld the new moratorium, ruling that while its legality is dubious, Kavanaugh’s opinion “tied” its hands. A panel of judges from the Court of Appeals for D.C. affirmed the lower court’s ruling last week, opening the door to Supreme Court review.

“This decision is the correct one, from both a legal standpoint and a matter of fairness,” National Association of Realtors spokesperson Patrick Newton told The Daily Caller News Foundation on Thursday. “It brings to an end an unlawful policy that places financial hardship solely on the shoulders of mom-and-pop housing providers, who provide nearly half of all rental housing in America, and it restores property rights in America.”

“No housing provider wants to evict a tenant—it is always a last resort and reserved for the rarest cases,” he continued. “The best solution for all parties is rental assistance, and all energy should go toward its swift distribution.”

Earlier in the day, the Treasury Department acknowledged that 89% of the $46.6 billion allocated by Congress to assist low-income renters during the pandemic hasn’t been distributed by the states. Most states have distributed less than 14% of the Emergency Rental Assistance program funds that the federal government awarded them.