Where Are America’s ‘Feminists’ Fighting for Afghan Women? 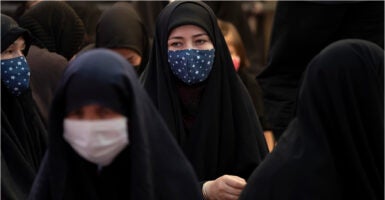 Some on the left are attacking conservatives who are working to bring attention to the endangered rights of Afghan girls and women. Pictured: An Afghan refugee attends a religious ceremony in Iran on Aug. 19. (Photo: Morteza Nikoubazl/NurPhoto/Getty Images)

After four years of marching in the streets and claiming “oppression” under President Donald Trump, many of the country’s so-called feminists are conspicuously silent about the plight of women and girls in Afghanistan in the wake of the Taliban takeover.

Worse, some of those who aren’t silent are instead using their platforms to attack conservatives who are working to bring attention to the rights of Afghan girls and women.

“If the GOP wants to show that it is sincerely concerned with the rights of the women in Afghanistan, it can start by first championing the human rights of women in the U.S.,” one MSNBC contributor wrote.

On this week’s episode of the “Problematic Women” podcast, we discuss why these petty, partisan attacks are a dishonest representation of democracy itself and an affront to the realities that Afghan girls and women now face.

We also catch up with Concerned Women for America’s Afghanistan Prayer Rally and highlight two brave Afghan women who leave us with hope in a dark situation.

Listen to the podcast below, and see here for ways to help.