Back to (What Kind of) School? Transgenderism, Yes; Testing, No 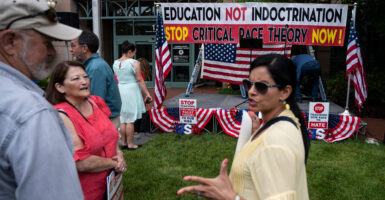 Virginians chat at the Loudoun County Government Center in Leesburg, Virginia, on June 12, prior to the start of a rally against critical race theory being taught in Loudoun schools. (Photo: Andrew Caballero-Reynolds/AFP/Getty Images)

When I was in public school, a TV ad asked: “It’s 10 o’clock. Do you know where your children are?”

Here’s a better question for today: “Do you know what your children are being taught and exposed to in their schools?”

This summer’s controversy over the teaching of critical race theory and whether to wear masks is only part of the problem. When kids claim to be a different sex than what they were born as and are allowed to use the locker rooms, restrooms, and showers previously reserved for what we used to call girls and boys, it further erodes the morals and values we once considered part of a solid education.

Added to this is a bill passed by Oregon’s Legislature and signed by Gov. Kate Brown that suspends essential-skills testing in order for a student to graduate from high school—despite an uproar from parents. This is where the education establishment is headed.

The “rationale” behind the law is that minorities don’t test well. Is that not racist on its face? Why don’t schools focus on bringing struggling students of whatever race or background up to a standard, instead of lowering the bar and making their diplomas worth less than Confederate money?

Since the 1960s, many public schools have been used by secular progressives to indoctrinate children, with the apparent goal of turning them into reliable liberal voters.

It began with the elimination of prayer and Bible reading, progressed to forced busing (which was supposed to improve the education of minority students, but had mixed results), and now we are at the point of gender identity, requiring teachers to ask students which pronoun they “prefer.”

Who can reliably predict what is coming next?

One preview of coming distractions came earlier this month, when the Loudoun County, Virginia, School Board voted 7-2 to pass a policy on the “rights of transgender and gender-expansive students.” Vehement protests by parents were ignored.

Once the sky was the limit for what hardworking students could achieve. Now it appears there are no limits to the depths to which we can plunge. Success is not to be honored, everybody gets a trophy, and failure is being eliminated.

China has another reason to celebrate following the messy U.S. withdrawal of forces from Afghanistan. Chinese students far outperform their international peers in reading, math, and science. According to 2018 results from the Program for International Student Assessment, U.S. students ranked 25th in science, reading, and math worldwide. China was first. Even Slovenia and Ireland outranked us.

Public schools may be the oldest monopoly in America. While government has broken up other monopolies, such as the phone company, public schools remain intact. Initially, schools met in churches. When they acquired their own buildings, they continued to teach basic subjects.

The McGuffey Readers were widely used in public schools from the mid-19th to early 20th centuries. They included proverbs about the virtues of honesty and hard work, even Bible verses. Now those are out, and metal detectors are in, especially in many urban schools.

Anyone see a connection?

Students once recited the Pledge of Allegiance before classes began. The pledge has been eliminated in some schools. The explanation is that many kids come from other countries.

There are currently 27 voucher programs in 16 states and the District of Columbia, according to the Education Commission of the States. It is hypocritical for those who favor choice when it comes to abortion to oppose choice for the education of children fortunate enough to have been born.

Expanding school choice to every state should be a major issue in the next two elections, with parents and children—especially minorities—testifying to the difference the ability to choose a good school has made in their lives.