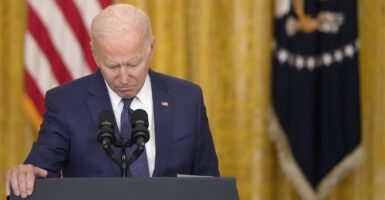 President Joe Biden talks Thursday about the situation in Kabul, Afghanistan, while facing reporters in the East Room of the White House. (Photo: Drew Angerer/Getty Images)

A deadly terrorist attack Thursday outside Kabul’s international airport demonstrate that U.S. evacuation efforts there, as well as the general situation in Afghanistan, are deteriorating.

Here’s a look at what lies ahead in the hastily executed U.S. withdrawal from Afghanistan after nearly 20 years there to prevent more terrorist attacks like those that occurred on Sept. 11, 2001.

>>> Update: The Pentagon announced Friday that only one bomb, not two, exploded outside the airport, followed by enemy gunfire, resulting in the deaths of 13 U.S. service members and more than 165 Afghans. A previously reported blast outside a nearby hotel did not occur, Army Maj. Gen. William “Hank” Taylor said.

Explosions in two areas of Hamid Karzai International Airport killed at least 13 U.S. service members, all Marines except for one Navy medic, the Pentagon said. Another 15 U.S. military personnel were wounded.

“The fallen this day are part of a great and noble company of American heroes,” President Joe Biden said in formal remarks beginning about 5:30 p.m. ET Thursday, after which he took some questions.

The attacks were said to be the work of ISIS-K, an affiliate of the Islamic State terrorist group that is a rival of the Taliban, the terrorist organization that took over Afghanistan as Biden pulled out U.S. troops.

It was the deadliest day for the U.S. military in Afghanistan since 2011, and the first death of a service member there since February 2020.

The “working assumption” is that one suicide bomber detonated an explosive device around 5 p.m. local time while being checked at a gate leading to the airport, Marine Gen. Kenneth F. McKenzie Jr., commander of U.S. Central Command, told reporters at the Pentagon.

The general added that the bomber “did not get on the installation.”

The suicide bomber’s device went off at the Kabul airport’s Abbey Gate as crowds sought to get in.

A second bomb went off at the nearby Baron hotel, where civilians were staying while awaiting evacuation.

“You don’t want to let someone on an airplane carrying a bomb, because that would result in an even more massive loss of life if an airplane were to be destroyed,” McKenzie said. “So, you’ve got to do the searches. We work with our Afghan partners on the ground. … Ultimately, Americans have got to be in danger to do these searches.”

McKenzie said the United States would rely on the Taliban—the militant group that provided a safe haven to Osama bin Laden and his al-Qaeda terrorist network in the lead-up to the 9/11 attacks on America—to “protect us” from future attacks by ISIS-K.

The K in ISIS-K stands for Khorasan, a region that includes parts of Afghanistan and Pakistan.

ISIS-K, a splinter group that criticized the Taliban as too moderate, broke off in 2015 as the Islamic State caliphate in Iraq and Syria was still raging. The newer group has carried out attacks on civilians, analysts say, but is an enemy to the Taliban.

“We are doing everything we can to be prepared for those [additional] attacks,” McKenzie said Thursday. “That includes reaching out to the Taliban, who are actually providing the security parameter around the airfield, to make sure they know what we need them to do to protect us. And we will continue to coordinate with them.”

Al-Qaeda remains aligned with the Taliban, now the dominant power in Afghanistan, said Jim Phillips, senior research fellow for Middle Eastern affairs at The Heritage Foundation, the parent organization of The Daily Signal.

“The Taliban is closely intertwined with al-Qaeda,” Phillips told The Daily Signal.

A Taliban spokesman told NBC News that there was “no proof” that al-Qaeda was behind the 9/11 terrorist attacks that killed about 3,000 Americans in 2001. But the Taliban also pledged not to allow Afghanistan to be used as a terrorist base, which is why the U.S. first invaded nearly 20 years ago.

Terrorist factions differ, and both the Taliban and al-Qaeda are rivals to ISIS-K, Phillips said.

“ISIS-K has been striking at civilians, but it is not as strong as the ISIS caliphate was and will likely eventually be strangled by the Taliban,” Phillips said. “ISIS-K does not have a bright future if the Taliban remains united.”

Phillips and other Heritage analysts note that the Taliban appointed the Haqqani Network, an al-Qaeda-linked terrorist organization whose leader has a $5 million FBI reward on his head, to take charge of security operations in Kabul.

The U.S. can’t trust this group to allow safe passage for U.S. citizens and Afghan allies to the airport for evacuation, they say.

Biden stated during his press conference late Thursday that the U.S. military would leave before all Americans are out of Afghanistan, but would continue trying to get Americans out.

“We will complete our mission and we will continue after our troops have withdrawn to find means by which we can find any American who wishes to get out of Afghanistan,” the president said. “We will find them, and we will get them out.”

Biden did not specify how that could occur without a military presence.

Earlier this week, Biden rejected the advice of Britain, France, and other G-7 colleagues to extend the Aug. 31 deadline by which the U.S. agreed with the Taliban to remove all U.S. forces.

“Despite this attack, we are continuing the mission,” McKenzie said. He added, “As of today, we have approximately 5,000 evacuees on a ramp at [the Kabul airport] awaiting airlift.”

Secretary of State Antony Blinken said Wednesday that 4,500 Americans had been evacuated from Afghanistan, and another 1,500 had yet to leave.

An unnamed official told Fox News that “hundreds” of ISIS-K terrorists remained in the area of the Kabul airport, and that it is “almost a certainty that Americans will be left behind.”

The U.S. government’s numbers are difficult to verify, Phillips noted, pointing to other estimates that about 15,000 Americans were in Afghanistan before the evacuation began.

“No one seems to know exactly how many Americans are in the country,” Phillips said.

Biden has pledged repeatedly to get every American out. Administration officials, including Blinken and White House press secretary Jen Psaki, adjusted that pledge to say the military will evacuate every American from Afghanistan who wants to leave.

“The Biden administration has created a massive hostage situation,” Phillips told The Daily Signal. “Even if the Taliban doesn’t take hostages, they will not do a lot to protect the Americans from al-Qaeda or other groups that would take them hostage.”

Still, Phillips noted some factors to consider about Americans who might not want to evacuate through the Kabul airport.

“There are a lot of dual citizens that don’t want to leave their relatives behind,” he said. “Many don’t want to risk going to Kabul. Also, it is easy to sneak across Afghanistan’s porous border into U.S. diplomatic stations in Karachi or Islamabad [both in Pakistan], or Central Asia.”

U.S. allies, including Canada, Poland, and Belgium, announced that they are ending their own evacuation efforts as the United States works on pulling out about 5,000 troops by the Tuesday deadline previously negotiated with the Taliban.

The U.S. military presence had been down to about 1,500 service members before Biden reinserted troops when the Taliban swept through Afghanistan about two weeks ago.

House Minority Leader Kevin McCarthy, R-Calif., has asked House Speaker Nancy Pelosi, D-Calif., to call the House into session to consider emergency legislation to block the executive branch from fully withdrawing until all Americans are safely out of the country.

That move, however, would require Pelosi to challenge a president of her own party whom she repeatedly has praised.

“The problem is that this is a fast-moving crisis and Congress is a slow-moving body,” Phillips said.

Biden on Thursday defended his decision to abandon Bagram air base, which is much larger than the nearby Kabul airport. The Taliban now controls that base.

Sen. Lindsey Graham, R-S.C., was among lawmakers calling for the U.S. to retake the Bagram base just north of Kabul.

“I have advocated for days that the Bagram air base should be reopened, as the Kabul airport is very difficult to defend and has been the only evacuation outlet,” Graham said Thursday.

The president sees it differently.

“On a tactical question of how to conduct an evacuation or a war, I gather up all the major military personnel that are in Afghanistan, the commanders, as well as the Pentagon, and I ask for their best military judgment,” Biden said. “What would be the most efficient way to accomplish the mission? They concluded, the military, that Bagram was not much value added, that it was much wiser to focus on Kabul. So, I followed that recommendation.”

“We should have sent the people out very safely, and we would have had Bagram open. That was always going to be—we should have kept Bagram because Bagram is between China. It has total access to China, Iran, and Afghanistan. And I guess they didn’t realize that they abandoned it,” Trump told Lisa Boothe on her podcast “The Truth with Lisa Boothe.”

At this point, Heritage’s Phillips said, it’s too late to try to take back the former U.S. air base because it likely would lead to a costly military conflict with the Taliban.

Heritage analysts point to a new resistance movement against the Taliban that is taking shape in Afghanistan. Its backbone, the National Resistance Front of Afghanistan, is based around the Panjshir Valley.

This region, about 70 miles northeast of Kabul, has been noteworthy for an ability to resist outside aggression such as the Soviet Union in the 1980s and the Taliban in the 1990s. The leader of the National Resistance Front is Ahmad Shah Massoud Jr., 32, son of Northern Alliance leader Ahmad Shah Massoud, whom al-Qaeda killed two days before the 9/11 attacks.