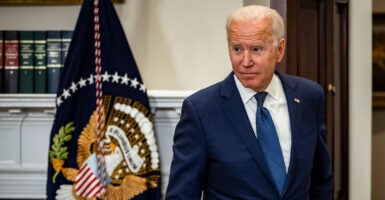 President Joe Biden speaks in the Roosevelt Room on the continuing situation in Afghanistan and the developments of Hurricane Henri at the White House Aug. 22, 2021, in Washington, D.C. (Photo: Samuel Corum/Stringer/Getty Images)

President Joe Biden stepped out of the Oval Office on Friday and delivered yet another defense of his Afghanistan withdrawal. For those convinced he’s in over his head, he did not disappoint.

His excuses were as pathetic as ever—but there was more in these remarks. Biden, an inept statesman and a disastrous politician, also proved he has no sense of history.

America—indeed, all the free world—is having a Dunkirk moment. We just don’t have a Winston Churchill. Make no mistake; just like Britons grabbed their boats and braved the channel crossing, there is a miracle every minute. Lives are being saved. People are getting to the airport, getting out, and finding refuge.

But at a time when people in the U.S. and all over the world are rushing to help, Biden is more bystander than world leader. The U.S. president on Friday sounded like the captain of the Titanic, declaring everything is fine and that everyone should go back to their staterooms, while the doomed band played “Nearer, My God, to Thee,” and passengers scrambled for the lifeboats.

So here is where we stand. Biden is 0-for-3. He has fumbled as a decision-maker. He has manufactured a political crisis of confidence. And he has failed as a strategic leader.

There are few precedents for the scope of this failure. John F. Kennedy made a bad call at the Bay of Pigs, but he stepped forward, learned from his mistakes, and was a rock during the Cuban missile crisis. Ronald Reagan endured Iran-Contra, but he was shrewd enough not to let it hamstring his presidency. Franklin D. Roosevelt used the tragedy of Pearl Harbor to show he had the true heart of a leader.

Biden has yet to muster even one of these attributes.

If FDR’s “Day of Infamy” speech had been written by Biden’s speechwriters, Harry Truman would have been president for the rest of the war. The only reason why there is no energy to dump Biden is that behind him is even greater weakness. He has assembled one of the most experienced but least competent teams in modern history.

No one should despair. We’ve had incredibly weak presidents for four years before (though Biden is making even Jimmy Carter, who presided over the Iranian hostage crisis of the late 1970s, look like a tower of leadership). What we can’t survive is if the rest of Washington sinks to Biden’s level of incompetence.

That starts with Congress. The notion of handing this administration $4.5 trillion in spending, along with the tools to take over the U.S. economy, ought to be unthinkable. The idea that the president’s Afghan debacle should escape thorough and immediate scrutiny by Congress should be dismissed out of hand. Our southern border needs to be secured, and Congress should demand that the departments of Homeland Security and Justice focus on fighting terrorism, not persecuting political enemies.

The media, meanwhile, ought to grow up and start doing real journalism, not partisan advocacy. Big Tech should let people speak their minds. Americans should stop being afraid to stand up for their country.

If we refuse to get beaten down and humiliated by the Taliban or hamstrung by Biden’s weakness, then America’s enemies will regret the day they challenged us and—as Adm. Isoroku Yamamoto said after Pearl Harbor—filled us with a terrible resolve.