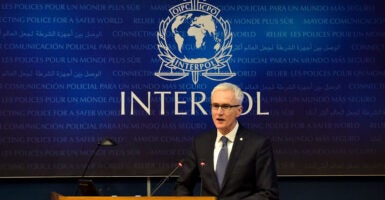 When functioning properly, Interpol makes it less likely that criminals can escape their home nation’s criminal justice system. When it is abused, however, Interpol can allow authoritarian regimes to harass political dissidents or to legitimize the expropriation of legitimate businesses. Pictured: Interpol Secretary-General Jurgen Stock gives a speech during a ceremony marking the 30th anniversary of the organization at its headquarters in Lyon, France, Nov. 27, 2019. (Photo: Romain LaFabregue/AFP/Getty Images) 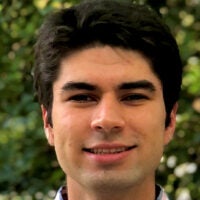 You’ve heard of the International Criminal Police Organization thanks to Hollywood, which often features “Interpol agents.” In reality, there are no Interpol agents: Interpol simply runs an online platform where states can post requests, called “red notices,” that ask its member nations to locate, provisionally arrest, and extradite fugitives.

The United States has been a longtime member of Interpol, which has traditionally been led by democracies like France and Britain. When functioning properly, Interpol makes it less likely that murderers, human traffickers, and other criminals can escape their home nation’s criminal justice system. When it is abused, however, it can allow authoritarian regimes to harass political dissidents or to legitimize the expropriation of legitimate businesses.

In recent years, congressional leaders have sought to rein in this abuse, aiming to prevent regimes like Russia and China from misusing Interpol to manipulate American law enforcement by falsely identifying political dissidents as criminals. The need for action is underscored by prominent examples of Interpol abuse.

>>> Ted R. Bromund, Ph.D., an authority on Interpol, chairs a panel discussion with leading voices on Interpol abuse about what the democratic world must to do to end it. Watch the event here.

The case of Bill Browder is one example. An investor and political activist, Browder has been the subject of regular Russian harassment via Interpol, stemming from his leadership in campaigning for legislation in democracies around the world to sanction Russia for its human rights abuses.

Another victim of abuse is NBA star Enes Kanter. Kanter, a native of Turkey, has been a vocal critic of Turkish President Recep Tayyip Erdogan, which led Turkey to request a red notice against Kanter.

As a result, Kanter was unable to travel with his team to Toronto and London, fearing that he could be arrested and extradited to Turkey.

And then there was Guo Wengui, an exiled Chinese businessman living in the U.S., who became the subject of a Chinese red notice request after he gave an interview in which he accused the Chinese Communist Party of corruption and mass murder.

If authoritarian governments are misusing Interpol to harass, intimidate, and persecute innocent victims, then the organization is not functioning as it should. Autocrats like Vladimir Putin and Xi Jinping should not have the power to put dissidents in danger of being arrested in the United States.

The U.S. Helsinki Commission began highlighting Interpol abuse in a 2019 hearing. The State Department this year named nine nations as Interpol abusers, including Russia, Saudi Arabia, and Turkey. In order to reform Interpol, the U.S. must push for transparency in the organization and penalties for regimes that abuse it.

The Transnational Repression Accountability and Prevention Act, first introduced by a bipartisan group of legislators in 2019 and reintroduced in 2021, takes a comprehensive approach to Interpol reform.

According to Sen. Roger Wicker, R-Miss., a co-sponsor of the bill in the Senate, the bill seeks to ensure that the U.S. does not “remain complicit in this global assault on the rule of law.” Rep. Steve Cohen, D-Tenn., who reintroduced the bill in the House in early August, adds that the act “cracks down on the misuse of these tools to prevent autocrats from harassing their own citizens overseas.”

One key provision of the Transnational Repression Accountability and Prevention Act is its promotion of transparency in reporting on Interpol abuse. The act mandates that the State Department include attempts by countries to misuse Interpol for political purposes in its annual country reports, giving lawyers, journalists, and political leaders a body of evidence to draw on when combating Interpol abuse.

Another key element is the act’s requirement that Interpol penalize abusers. It aims to require that Interpol punish “regular or egregious” abusers by suspending their access to Interpol systems. This provision is particularly significant, as it would force abusive countries to either adhere to Interpol’s rules or face suspension.

Without these reforms, authoritarian regimes will continue to define who is a criminal in the United States, and American law enforcement will continue to treat their meritless requests as legitimate. We must end this foreign manipulation of the American criminal justice system.