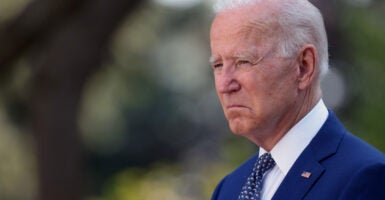 The reality is that President Biden, pictured at a ceremony where he signed a bill honoring law enforcement in the Rose Garden of the White House on Aug. 5, couldn't go a year in office without pleading with oilocracies to hike production. (Photo: Win McNamee/Getty Images)

“What the IPCC told us is what President [Joe] Biden has believed all along,” White House press secretary Jen Psaki noted last Tuesday. “Climate change is an urgent threat that requires bold action.”

The very next day, the Biden administration released a statement imploring the OPEC cartel to increase production of oil to help lower worldwide gas prices. “Higher gasoline costs,” the White House said, “if left unchecked, risk harming the ongoing global recovery.” The White House wants OPEC to go above the 400,000-barrels-per-day increase it already promised to implement, which doesn’t seem to jibe with the notion that we are on the precipice of the apocalypse.

As an economic matter, of course, the request makes total sense: By pressuring exporters to pump more oil, a fungible commodity, we lower costs worldwide.

Even though technology continues to create efficiencies that lower emissions, modernity relies heavily on affordable and reliable energy. Economies would collapse without it. And for emerging nations, affordable fossil fuel remains a prerequisite for lifting billions of people out of poverty.

As a political matter, it might seem odd, to say the least, that President Joe Biden is imploring foreign nations to increase supply. Firstly, such a position runs contrary to virtually every “green” plan in existence—almost all of which intentionally, through mandates or bans or taxes or contrived “markets,” exist to make fossil fuels more expensive and reduce use.

Clean energy advocates, including the president, argue that, in the aggregate, going green would be an economic plus. But if slightly higher prices threaten the world’s economic health, what would complete weaning from fossil fuels do to the economy? Biden has promised a “100% clean energy economy” with “net-zero emissions” in only a few decades. Without some technological miracle, this is a fantastical, not to mention suicidal, goal.

The reality is that Biden couldn’t go a year in office without pleading with oilocracies to hike production. In his defense, one assumes, people will point out that COVID-19 presents a historically unique situation. As far as the economics of recovery go, not really. In fact, this manmade downturn should be easier to mend than most. And this is certainly not the last recession or downturn or pandemic or world event that is going to affect the energy market.

Though it’s probably an unpopular position, I’d be content importing cheap oil, or allowing others to flood the market, while saving our own supply for a time when new drilling becomes more economically feasible. But the hypocrisy of all this is that Biden works to restrict energy trade only in North America.

Earlier this year, the president rescinded oil and gas lease sales from most of the nation’s massive state-owned lands and waters, citing climate change as the reason. He then shut down the Keystone XL pipeline, revoking a permit that was needed to build a 1,200-mile project that would have carried around 830,000 barrels per day of Alberta oil sands crude into the United States—probably more than enough to avoid begging OPEC for oil—again citing climate change as the reason.

At the same time, Biden lifted United States sanctions that would have blocked completion of the Nord Stream 2 natural gas pipeline that will transport fuel from Russia to Germany, which, like us, is a signee of the Paris Agreement.

Most European nations aren’t abiding by that agreement (well, without the help of an economy-paralyzing pandemic). Which is a reminder that to merely keep pace with the IPCC recommendations on carbon emissions, Americans, who use around 20 million barrels of petroleum every day, would be compelled to induce a pandemic-level shutdown of the economy every year for 30 years.

Americans, despite what they tell pollsters about climate change, demand affordable gas. You might recall that, despite his best efforts to undermine U.S. energy production, former President Barack Obama took credit for the domestic oil and gas boom. “That was me, people,” he told a crowd in 2018. Political pressure is also why the White House made sure its OPEC statement on gas prices was for public consumption, rather than simply making those requests of OPEC through diplomatic channels.

The Green New Deal, whatever iteration of the plan you care to support, is unfeasible. Biden’s request is just another reminder.