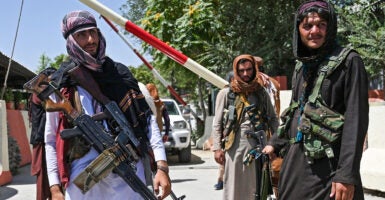 After 20 years, about $1 trillion, and the loss of 2,448 American service members and 3,846 U.S. contractors, the Taliban has taken control of Afghanistan.

Emotions ran high over the weekend and into Monday as Americans watched while Taliban militants marched into Kabul, the Afghan capital, and seized control of the presidential palace.

“We gave them every chance to determine their own future,” President Joe Biden said of the Afghan military and leadership as he addressed the nation Monday afternoon after briefly returning to the White House from Camp David.

“We could not provide them with the will to fight for that future,” Biden said, adding that he does not regret the decision to withdraw American troops.

In September 2020, President Donald Trump said he planned to fully withdraw troops from Afghanistan by May 2021. Biden adopted Trump’s plan, but pushed the withdrawal date back by several months.

U.S. forces began withdrawing in May. On July 6, the military evacuated Bagram Airfield, the largest U.S. military installation. One month later, the Taliban began taking control of the capitals of some of the 34 provinces.

On Saturday, one day before the Taliban seized control of Kabul, Biden issued a statement saying America would proceed with the withdrawal amid the quickly rising conflict.

“I have directed the secretary of state to support President [Mohammad Ashraf] Ghani and other Afghan leaders as they seek to prevent further bloodshed and pursue a political settlement,” Biden said.

The president also warned that any action by the Taliban “that puts U.S. personnel or our mission at risk there will be met with a swift and strong U.S. military response.”

Ghani fled the presidential palace in Kabul on Sunday before Taliban fighters entered the building and were photographed standing behind the president’s desk with machine guns.

U.S. military forces took control of Kabul’s international airport and worked to remove American citizens and others seeking to flee.

On Twitter, Democrat and Republican leaders and pundits alike have voiced concern, outrage, and sorrow over the Taliban’s swift takeover of Afghanistan. Here is a sampling from 22 of them.