Fall of Afghanistan Seen as Historic Failure for Biden 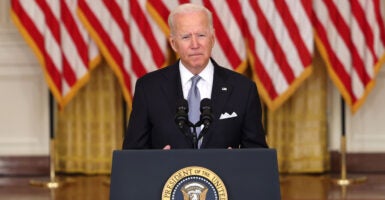 “I stand squarely behind my decision,” President Joe Biden says of the crisis in Afghanistan during remarks Monday in the East Room of the White House. (Photo: Anna Moneymaker/Getty Images)

When candidate Joe Biden was asked if he would bear some responsibility for the outcome of a U.S. withdrawal from Afghanistan if the Taliban took control of that country, he answered, “No, I don’t.”

On Monday, as president, Biden sought to explain his withdrawal of U.S. troops from Afghanistan, which was followed by the Taliban’s toppling of the U.S.-backed Afghan government with remarkable speed two weeks before the pullout was to be complete.

Events over the weekend and into Monday invited immediate comparisons to the fall of Saigon in 1975 and the later foreign policy failures of a one-term president, Jimmy Carter.

The Taliban takeover marks a clear U.S. defeat in a two-decade war just before the 20-year anniversary of the 9/11 attacks on America that prompted an allied invasion of Afghanistan to punish the Islamist group, which had sheltered al-Qaeda terrorists and their leader, Osama bin Laden.

“History will not judge the Biden presidency kindly for this,” Bill Roggio, a senior fellow at the Foundation for Defense of Democracies and editor of the Long War Journal, told The Daily Signal.

“This makes child’s play out of any of Jimmy Carter’s failures. Carter mishandled a hostage situation,” Roggio said. “Biden took actions that led to the collapse of an ally that we had invested enormous blood and treasure in. This is a defeat for the U.S. and a defeat for the Afghan government.”

Including interest by 2050, the cost of the Afghanistan War could reach $6.5 trillion and 2,448 members of the U.S. military lost their lives in the conflict, according to an Associated Press analysis.

The latest death of an American soldier there came in February 2020.

Biden never was heavily invested in Afghanistan on principle, admitting to opposing President Barack Obama’s troop surge there while he served as vice president.

In the CBS News interview during the 2020 presidential campaign, Biden also said President Donald Trump had too many troops in Afghanistan.

During a Democratic presidential primary debate hosted by CNN in January 2020, Biden said: “I think it’s a mistake to pull out the small number of troops that are there now to deal with ISIS.”

In September 2020, Biden told the military publication Stars and Stripes: “I think we need special ops capacity to coordinate with our allies,” amounting to about “1,500 to 2,000” troops on the ground. In the same interview, Biden said: “These forever wars have to end.”

Also that September, asked whether he backed the Trump plan for an exit from Afghanistan, Biden told reporters: “Yes, I do. As long as he has a plan to figure out how he’s going to deal with ISIS.”

In his remarks Monday at the White House, Biden repeated that he “inherited a deal that President Trump negotiated with the Taliban.”

At the same time, he asserted, “I stand squarely behind my decision.”

Biden has announced the temporary deployment of 6,000 additional troops to help evacuate U.S. personnel from Afghanistan.

In his speech at the White House, the president said:

Those that argue we should stay: How many more generations of American fathers and sons would you have me send to fight Afghanistan’s civil war when Afghan troops will not? How many more lives—American lives—is it worth? How many endless rows of headstones at Arlington National Cemetery? I’m clear in my answer. I will not repeat the mistakes we made in the past.

A “forever war” and a rapid, irresponsible withdrawal is a false choice, said Jason Killmeyer, former chief of staff of global defense, security, and justice at Deloitte Consulting LLP.

Killmeyer said the Biden administration lacked a regional basing agreement for U.S. troops and untied the U.S. exit from a regional security agreement.

“Foreign policy disasters stick out in a different way for presidents and their legacies,” Killmeyer told The Daily Signal. “People will be writing books on this. There will be a play-by-play about the 72 hours at Camp David.”

Biden traveled Friday afternoon to the presidential retreat of Camp David in Maryland, returning to the White House to make his remarks only after the Taliban had captured Kabul, Afghanistan’s capital. He then returned to Camp David.

In February 2020, the Trump administration reached a deal with the Taliban for an end to the war based on whether the Islamist political and military group cooperated with international terrorists.

But Biden rarely claims to have his hands tied by other Trump policies, the Long War Journal’s Roggio said.

“The Biden administration is under no obligation to keep Trump agreements. This wasn’t a treaty,” Roggio said. “The president easily discarded Trump’s Iran policy and other policies. This is just a craven attempt to shelter himself from his own decision.”

At the same time, Roggio said, Trump clearly put a U.S. withdrawal in motion with the agreement with the Taliban. Whether Trump’s administration would have made changes is not knowable, he said.

“He may very well have made changes based on conditions. We can’t know. What we do know is that Trump put this in motion,” he said.

TV images of violence over the weekend resulting from the Biden policy mark a potential culmination of what Robert Gates, defense secretary under both George W. Bush and Barack Obama, once wrote of Biden: “I think he has been wrong on nearly every major foreign-policy and national-security issue over the past four decades.”

Sen. Sheldon Whitehouse, D-R.I., a liberal Biden supporter whose father was an ambassador to South Vietnam, was among those comparing the Taliban’s triumph to the fall of Saigon, South Vietnam’s capital.

At a July 8 press conference, in response to a question, Biden dismissed the comparison.

“The Taliban is not the south—the North Vietnamese army. They’re not—they’re not remotely comparable in terms of capability. There is going to be no circumstance where you see people being lifted off the roof of an embassy in the—of the United States from Afghanistan. It is not at all comparable,” Biden predicted.

The collapse of Afghanistan is on a scale with the U.S. failure in losing the Vietnam War and well surpasses any foreign policy failure of the Carter administration, said James Carafano, vice president for foreign policy and national security at The Heritage Foundation, the parent organization of The Daily Signal.

“We are not looking at rookie mistakes. This is a seasoned foreign policy team,” Carafano told The Daily Signal. “Carter had a lot of rookies and mistakes from people who had never worked in Washington before.”

It doesn’t hold up factually to blame the Trump administration’s conditions-based agreement, Carafano said. This was not a consequence of the Trump agreement, he said, and Biden ignored the advice of military and intelligence officials.

“Biden lied to the American people. He didn’t prepare for something that was predicted to happen if he took this course,” Carafano said. “He put the safety and security of Americans at risk and he humiliated everybody. This is literally a presidentially created crisis.”