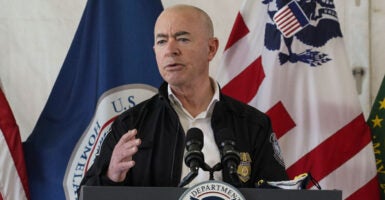 Homeland Security Secretary Alejandro Mayorkas speaks with reporters at at a press conference May 7 at a temporary Customs and Border Protection processing center in Donna, Texas. (Photo: Go Nakamura/Getty Images)

Homeland Security Secretary Alejandro Mayorkas warned that the U.S. immigration system “isn’t built” to handle the border crisis, according to a leaked audio recording of his visit last week with border officials provided to The Daily Caller News Foundation.

Border officials are taking care of families and children who arrived unlawfully instead of patrolling in the field or working in data entry jobs, Mayorkas said in a closed meeting Thursday with Border Patrol agents at a U.S. Customs and Border Protection station in McAllen, Texas, according to the recording.

“If our border is the first line of defense, then we’re gonna lose and this is unsustainable,” Mayorkas said he told Mexican officials during his most recent trip to that country. “We can’t continue like this. Our people in the field can’t continue and our system isn’t built for it.”

“I know very well … how close we were to breaking in this sector, and it’s our responsibility to make sure that it never happens again, never gets close again,” Mayorkas added. “We’re stepping up our enforcement, we’re working on the policies.”

This afternoon in Brownsville, @SecMayorkas:
??Detailed DHS actions to address the situation at the border
??Addressed the afternoon muster to thank our dedicated Border Patrol
??Met with local law enforcement, NGO's, and other leaders. pic.twitter.com/XZrUpgqO84

An unidentified Border Patrol agent said border officials have addressed influxes of illegal immigrants before and can do it again by enforcing the law against illegal entry, according to the audio. The agent criticized the Biden administration for complicating the process and making it more difficult than it needs to be by doing things differently.

“This station is operating on a minimal budget. We’ve got vehicles in our fleet that have rust in the door—that’s embarrassing,” the agent told Mayorkas. “I mean, we have solid holes in some of our doors because we don’t have vehicle replacements. We don’t have vans, we don’t have buses.”

“This nation’s, this country’s Border Patrol is huge,” the agent added. “But this situation, we created it. We created it by allowing this.”

Border officials encountered more than 212,000 illegal immigrants at the southern border in July, including record numbers of unaccompanied children and family units, according to Customs and Border Protection. Officials caught over 18,900 unaccompanied minors in July, up from 18,800 reported in March.

“I do hope to see the day where I don’t see the black, diagonal band across your badge,” Mayorkas told the agents. “We owe that to you.”

Agents wear black bands across their badges to mourn an officer who died in the line of duty, according to the Officer Down Memorial Page. The bands are worn in honor of Border Patrol agent Daniel P. Cox, who died in a head-on car crash July 31 after 24 years with the Border Patrol, The Arizona Republic reported.