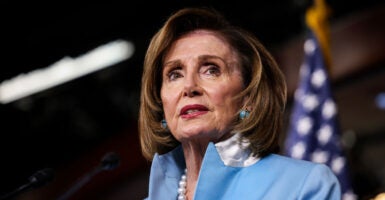 A letter to House Speaker Nancy Pelosi from nine House Democrats threatens the Democrats’ strategy to take up both infrastructure and the budget simultaneously. Pictured: Pelosi speaks at her weekly news conference at the Capitol on Aug. 6, 2021, in Washington, D.C. (Photo: Anna Moneymaker/Getty Images)

Nine centrist Democrats in the House vowed in a letter released early Friday that they would not vote for Democrats’ $3.5 trillion budget until President Joe Biden signs the bipartisan infrastructure package into law.

“The country is clamoring for infrastructure investment and commonsense, bipartisan solutions,” the nine House Democrats say in their letter to Pelosi. “This legislation does both, and will help us compete with China and others in the global economy.”

[Democrats hold a slim majority in the House, with 220 seats to Republicans’ 212 plus three vacancies he House

The letter to Pelosi is signed by Reps. Josh Gottheimer of New Jersey, Carolyn Bourdeaux of Georgia, Filemon Vela of Texas, Jared Golden of Maine, Henry Cuellar of Texas, Vicente González of Texas, Ed Case of Hawaii, Jim Costa of California, and Kurt Schrader of Oregon.

With the lives of hardworking American families at stake, we simply can’t afford months of unnecessary delays and risk squandering this once-in-a-century, bipartisan infrastructure package. It’s time to get shovels in the ground and people to work.

We will not consider voting for a budget resolution until the bipartisan Infrastructure Investment and Jobs Act passes the House and is signed into law.

The budget bill is exempt from a Senate filibuster, meaning Democrats can pass it without any GOP support so long as all 50 Democrat senators vote in favor and no more than three House Democrats vote against it.

The spelling of Rep. Jared Golden’s first name was corrected within 24 hours of publication of this report.