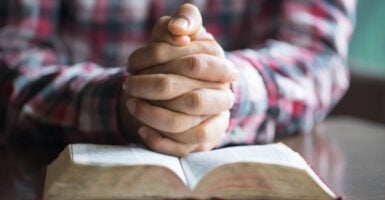 David French, a Christian conservative commentator, argues that “systemic racism” is real and—citing several Old Testament examples—argues that Christians have an obligation to cure it. This view is mistaken. (Photo: krisanapong detraphiphat/Getty Images)

In a recently published blog, David French, a Christian conservative commentator, argues that “systemic racism” is real and that Christians have an obligation to cure it. This is true, he claims, even if they are not themselves intentionally racist, because they are inadvertently perpetuating the racism of their ancestors.

Citing several Old Testament examples where God commanded the Israelites to confess and make amends for the “sins and iniquities of their fathers,” French says that Christians have an “intergenerational” obligation to “ameliorate systemic injustice” by embracing the “solutions” found in sociology, history, and economics.

Distilled to its essence, French’s argument has three parts: (1) systemic racism exists, (2) the Bible requires Christians to cure it (3) by looking for solutions outside of the Bible.

I will focus primarily on part 1, but I’ll add a few notes about the assumptions he makes in part 3. I am not qualified to address part 2.

French’s argument depends on his ability to prove the first point—that systemic racism exists. If he fails to do that, the rest of his argument is moot.

How curious it is, then, that he doesn’t get around to that issue until the 16th paragraph. That is the first sign that this piece is not well-reasoned, but it is not the last.

To prove the existence of “systemic racism,” French must first define it. Here, he stumbles. He starts by explaining what it is not. It is not actions undertaken with racist intent, he says. He then points to “residential segregation” and, specifically, redlining (a practice whereby banks refused to invest money in certain neighborhoods), “profound employment discrimination,” and “educational disparities.”

This reasoning is befuddled. French is trying to reason from the specific to the general, but he distills no common principle from his three examples.

The first is an action motivated by a business judgment, which often has a disparate impact on minorities if they make up the greater part of that neighborhood. The second is an action by individuals motivated by racial animus. And the third is not an action, but the result of some unspecified set of causes.

Are these all systemic racism? If not, are they causes of it, results of it, parts of it? French doesn’t say.

If we read charitably between the lines, it seems that French thinks systemic racism is any lingering disparity in outcomes between black and white Americans that is caused by past actions that were motivated by racial animus.

Or perhaps not. Because he is so vague, you can plausibly read French as saying that that there is no requirement that a disparity results from past racial animus. But if that’s so, then what ancestral sins are Christians atoning for?

French may not have nailed down a definition of systemic racism, but that doesn’t stop him from trying to prove that it exists. Here’s how he does it: French says that redlining, employment discrimination, educational disparities, and legal oppression caused residents of historically black neighborhoods to remain there after passage of the Civil Rights Act. He then assumes that their failure to move to other neighborhoods caused the black-white wealth gap that persists today.

This is where French’s reasoning goes from careless to lazy. I don’t use that word flippantly, but how else can we explain that in making those causal assumptions French has disregarded mountains of work by serious scholars?

What thoughtful commentator would wade into an issue as complex as the economic development of racial groups in America and not even glance at the work of, say, Thomas Sowell, Walter Williams, and Ian Rowe (among others) before forming and, heaven forbid, publicly declaring an opinion?

What the work of these scholars shows is that the causal chain between the intentional racism of our forefathers and present-day disparities in household wealth (and other disparities, besides) is long, blurry, and frequently interrupted by other causes that likely cut the thread.

French considers none of this. His imprecision both of thought and language forces him to take the path of least intellectual resistance: ceding to the devilishly clever word games of the race-obsessed for whom vagueness and ambiguity are both a shield and sword.

He demands that Christians repent and atone for the “consequences” of their ancestors’ sins, but he doesn’t connect the dots between those sins and lingering disparities between racial groups. He can only declare that it is “clearly true.”

The 16-paragraph delay before French reaches the keystone of his argument and the speed with which he leaves that topic (he departs it after only three paragraphs) hint that perhaps even French knows his understanding of systemic racism is murky.

If there was any lingering doubt, French dispels it with the neophytic claim that one of the “solutions” to systemic racism is more multi-family housing in wealthy communities.

It is a bit ironic that French demands Christians look to sociology and economics for answers while he himself seems unaware of Sowell’s oft-proved catchphrase: “There are no solutions, only trade-offs.”

Credit where it is due. According to the work of Sowell, Williams, and others, easing housing regulations often does help to diminish wealth disparities. What logically follows from that observation, however, is the command that everyone who wants to ameliorate disparities (a worthy goal) should support housing deregulation.

That is not, however, the command that French issues. With soaring rhetoric that possess all solidity of a windblown cloud, French commands Christians to “act justly” by setting right “these racist structures.” There is no “conservative” justice or “progressive” justice, he declares, “[i]t’s simply justice.”

Propelled to such rhetorical heights, French’s logic melts like the wax wings of Icarus. There are indeed two conceptions of justice. Call them progressive or conservative or whatever you like, but there are two.

The one embodied in the Constitution sees justice where the government ensures that all people are given an equal opportunity. The other, preferred throughout modern history by the political left, sees justice only when the government tries to guarantee equal outcomes. French seems to embrace the latter, but the vagueness of his reasoning and his tenuous grasp on the topic leave open the possibility that he hasn’t really thought this through.

But be warned. If you are tempted to criticize French’s thinking, he has several preemptive attacks waiting for you. Several times he says that those who disagree with his ill-wrought argument are not true conservatives. Elsewhere he suggests that those who do not take his prescription for curing whatever he means by systemic racism are “snowflakes” who lack humility.

This is uncharitable and petty. Perhaps those who disagree with French are people who care deeply about ending pervasive racial disparities but who think these complicated issues demand the application of rigorous thought to data.

Perhaps they prefer to study the sociology, history, and economics around these issues instead of paying lip service to them and jumping, emotions first, into “solutions.” Perhaps they would like to work on these issues without being attacked as racists by those who use such word games in bad faith to silence critics of their policies.

At the end of his article, French has accomplished two things. He has alienated those of us “fake” conservatives who don’t buy into the progressive framing of these issues. And he has proved how unwise it is to confidently declare an opinion on a topic you know little about.