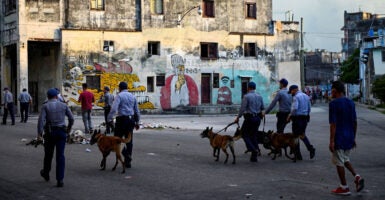 Policemen patrol the streets with dogs in the framework of a demonstration against Cuban President Miguel Diaz-Canel in Havana on July 11, 2021. (Photo: Yamil Lage/AFP/Getty Images)

Are they still protesting in Cuba?

The Cuban government has shut off the Cuban people’s internet.

The big demonstrations began four weeks ago, sparked, curiously, by a rap song. The key lyric is: “Freedom! No more Doctrine!”

“Doctrine” refers to the “constant cycle of propaganda” from the government, explains Cuban emigre Alian Collazo in my newest video.

Sadly, silly TV reporters in America claimed the protests were about “hunger, pandemic restrictions and the lack of COVID vaccinations,” or, according to ABC’s George Stephanopoulos, “food and fuel shortages.”

“Nonsense!” says Collazo. The cause is clear. “The protesters were yelling, ‘Down with communism!’ and ‘Libertad! Liberty!'”

Democratic socialist Rep. Alexandria Ocasio-Cortez claimed: “They are protesting the lack of materials during the pandemic, particularly the lack of medical supplies.”

“She speaks Spanish! Can she not listen to what the Cuban people are saying? ‘Libertad’ means ‘freedom’!”

The embargo is absurd and counterproductive.

But that misses the point.

“Do research on what the embargo is! Medicine, food, and all of that can be traded,” says Collazo.

Yes, they can. America exempts food and medicine from its embargo.

Also, at least 80 other countries do trade with Cuba.

The real reason for shortages and suffering in Cuba is communism.

“When the government controls your business,” says Collazo, “people don’t have food. All resources end up in the hands of the state.”

In his documentary “Sicko,” Moore took a group of Americans to a Cuban hospital and celebrated how they were given free health care.

But Collazo points out that “free” is misleading. “Go to a hospital in Cuba—they don’t even have aspirin! Yeah, [health care’s] free. [But] it’s horrible.”

When the recent protests began, a reporter asked President Joe Biden’s press secretary, Jen Psaki, “Do you think that people are leaving Cuba because they don’t like communism?” She responded, “They are opposed to the oppression [and] mismanagement of the government.”

She wouldn’t condemn communism by name.

Fortunately, a few days later, her boss did. “Communism is a failed system, a universally failed system,” said Biden. “I don’t see socialism as a very useful substitute.”

Good for Biden for saying that.

Collazo wishes he would do more.

“The Cuban people are not asking for military intervention,” he says. Instead, “Get the president of the United States to deliver internet.”

The current protests “happened spontaneously,” says Collazo, “because of social media. That’s why the regime didn’t even know about it … they were surprised by the enormous amount of individuals that went out at the same time.”

Because of that, Cuba’s government has now shut down the island’s only internet provider. Future protests will be hidden from the rest of the world.

The United States could beam internet into Cuba.

I don’t know if it would make a difference.

But Collazo thinks it would.

“This is historic. In Cuba, we have never seen this.”