Biden Must Not Squander the Cuban Moment 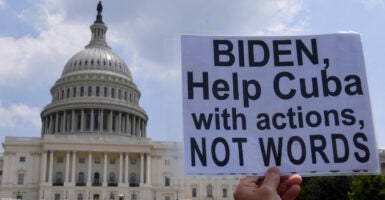 The Biden administration must not pass up the opportunity to support democracy in Cuba. Pictured: Cuban activists and supporters rally outside the U.S. Capitol in Washington, D.C., on July 27. (Photo: Olivier Douliery/AFP/Getty Images)

The demonstrations that shook Cuba on July 11 will soon be a month old. Since then, a Carthaginian peace has descended on the unhappy island, with mass arrests, show trials, and disappearances having the desired effect of suppressing further demonstrations. The Biden administration meanwhile remains paralyzed, with self-doubt appearing to sap its confidence.

Which means that, hard as it may be to accept, the opportunity for real change is being squandered. This is a harsh assessment, given the degree of hope the July 11 events unleashed throughout the world that Cubans might get their freedom back. But it is an assessment one must make before time completely runs out.

No, Cuba will not return to the status quo ante. Something real changed on July 11, when thousands saw each other in the streets in some 40 cities from one end of the island to another. Once a population has an experience of collective fear and loss, terror can be used only sporadically, tactically, as in the present cat-and-mouse game.

Fear, therefore, now is no longer a long-term strategy for the regime. On the contrary, it is the hapless Miguel Diaz Canel, Cuba’s puppet president, and the Castro family, whose interests he defends, that now get to taste fear; in fear they must live that the Cubans will rise again, and this time impose themselves. Diaz Canel himself has become a figure of derision throughout the island, with a toxic epithet attached to his name in videos and streets protests.

Cuba on July 11 experienced something akin to what the Poles underwent when Pope John Paul II visited his homeland in 1979 and millions turned out to see him in the streets, and then saw their numbers, and understood their strengths. “Be not afraid,” was the pope’s message, and it stuck.

However, in the absence of outside help, there is not much more the Cubans can do. The communists have all the guns, having rounded up all the weapons in one of their first acts in power after the revolution’s triumph in 1959. And one can rest assured that the Castros will hang onto power even if they have to imprison or shoot the last Cuban to do so.

President Joe Biden could certainly be doing more. But he seems to be pulling back because he fears upsetting pro-Castro factions in the left of his own party, and desires to avoid a chaotic situation just 90 miles away—even if this chaos leads to the birth of liberty for 11 million people.

Biden, for example, could be using his bully pulpit to gather a bigger international coalition. As it was, Secretary of State Antony Blinken forged a 20-nation coalition that called on the Cuban regime to respect the rights of the Cuban people and to end the ongoing detentions of summary trials.

The coalition included Brazil, Israel, Honduras, Montenegro, Cyprus, etc. Aside from the three Baltic States, always stoic supporters of freedom because of their history, none of America’s NATO allies were included. Nor were other important treaty allies such as Japan, Australia, or the Philippines.

Cuba observers were left scratching their heads and wondering if the administration had even undertaken the diplomatic spadework needed to sign up these bigger names. The paltry effort stands in contrast, for example, to the success the Trump administration enjoyed rallying international support for Juan Guaido against Venezuela’s Nicolas Maduro two years ago. Nor has the administration, for all of its stated support for the Cuban people, called out Diaz Canel for appearing on television to demand that communists take to the streets and inflict violence on demonstrators.

The administration has also done nothing to expand Cubans’ internet connectivity, something else that needs to happen if the Cubans’ march for freedom is to have any success. The first thing the communist regime did after July 11 was to shut down the internet on the island, an economic cost that all totalitarians are glad to pay.

Sen. Marco Rubio, R-Fla., and others have called on the Biden administration to use balloons flying high above the island to get around the Cuban regime’s chokehold, or even the Guantanamo naval base the U.S. government leases on the island, but the administration has not moved beyond the study stage.

Dissidents who warned back in 2016 about the agreement signed between Google and the Cuban regime wonder if the tech giants are refusing do what’s necessary to help Cubans, and the Biden administration is not applying needed pressure.

One thing delaying a rapprochement with the Cuban regime is that it would be a clear betrayal of the brave Cuban protesters, and that it would have a clear impact in elections in Florida, a key state on the Electoral College map.

But we can expect voices on the left to continue to work on the administration going easy on the communist regime. These will come from traditional liberal corners, such as the Washington Office on Latin America, which purports to support human rights in Latin America but has nothing on its website on the Cuban protests (it even issued a report on Cuba that omitted any mention of them), or from outright Marxist outlets such as Black Lives Matter, which supports the regime over the protesters.

But Biden should be wary. Even if these are the voices that influence those he has surrounded himself with—from Susan Rice, his director of the Domestic Policy Council, to Mendrala and Gonzalez—Biden himself should understand that inaction and wrong action will be weighed heavily by historians. Squandering the Cuban moment will not be forgotten or forgiven.