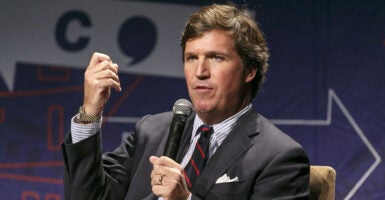 “We believe any efforts to impede a journalist’s ability to report the news ... must be rejected,” the National Association of Broadcasters says in a rare defense of Fox News host Tucker Carlson among major journalism groups. Pictured: Carlson speaks during Politicon at Los Angeles Convention Center on Oct. 21, 2018. (Photo: Rich Polk/Getty Images)

The Daily Signal got mixed results last week when it asked CNN, The New York Times, and The Washington Post for comment on journalist-commentator Carlson’s treatment by the National Security Agency, and met with a similar reaction this week from the Society of Professional Journalists and other major media groups.

“NAB strongly supports the right of journalists to perform their important work without fear of interference, intrusion or intimidation by government officials at any level,” a spokesperson for the National Association of Broadcasters told The Daily Signal in an email. “We believe any efforts to impede a journalist’s ability to report the news is [an] antithesis to the First Amendment’s guarantee of a free press and must be rejected.”

After an internal investigation, the Biden administration’s National Security Agency admitted that Carlson’s identity was “unmasked” and leaked, as first reported July 23 by The Record, a news site focused on cybersecurity, and later by other outlets.

“Journalists play an indelible role in American democracy by documenting stories shaping our nation, questioning decision-makers and community leaders, holding public officials and institutions to account, and informing audiences about the news affecting their lives,” the National Association of Broadcasters spokesperson also said of the Carlson case.

“Unmasking” is a term used to describe the process by which the NSA and other U.S. intelligence agencies allow designated national security personnel—including White House officials—to see the identities of American citizens who communicate with foreigners who are under surveillance.

The Record cited two unnamed sources who said Carlson, a conservative commentator with a strong journalism background and host of the No. 1 cable show “Tucker Carlson Tonight,” was mentioned in “communications between two parties” under government surveillance.

Under federal law, the names of American citizens normally must be shielded by and from spy agencies.

The Committee to Protect Journalists, an advocacy group that promotes freedom of the press in the United States and globally, called in late 2020 for the incoming Biden administration to stop unwarranted government searches of journalists’ electronic devices and to curb espionage charges against their sources.

The Committee to Protect Journalists also has been critical of the previous two presidential administrations’ records on press freedom.

“CPJ is always concerned by allegations that law enforcement or governments anywhere in the world have surveilled journalists,” a spokesperson for the organization told The Daily Signal in an email when asked about the Carlson case.

In a 2020 report, the Committee to Protect Journalists called on the Trump administration to stop the Department of Homeland Security from conducting unwarranted searches of journalists’ electronic devices and to end the Justice Department’s practice of bringing espionage charges against reporters’ sources.

The Committee to Protect Journalists issued a 2013 report that was highly critical of the Justice Department’s aggressive prosecution, under the Obama administration, of those who leaked classified information and of broad electronic surveillance programs that deter government sources from speaking to journalists.

The Daily Signal also sought comment from other journalism groups, including the Society of Professional Journalists, the Reporters Committee for Freedom of the Press, the Poynter Institute for Media Studies, Investigative Reporters and Editors, the Knight Foundation, and the Nieman Foundation for Journalism at Harvard.

Most said they were not familiar enough with the Carlson-NSA matter, or that commenting on specific cases was not part of their missions.

Other media organizations did not respond at all to The Daily Signal’s inquiries, including the American Society of Journalists and Authors, the Radio Television Digital News Association, and the News Leaders Association.

In June, Carlson accused the NSA of monitoring his emails in hopes of finding something damaging to get him kicked off the air at Fox News Channel. He cited unnamed sources.

In early July, Carlson told his audience that the NSA had unmasked him for seeking an interview with Russian President Vladimir Putin. The NSA initially released a carefully worded statement asserting that the Fox News host “has never been an intelligence target.”

“As Fox News has maintained, no government agency should be interfering with a free press and we will defend the protected rights of every news organization in its pursuit to hold truth to power,” a Fox News spokesperson told The Daily Signal in a formal statement Friday. “For the NSA to unmask Tucker or any journalist attempting to secure a newsworthy interview is unacceptable.”

Last week, however, CNN and The Washington Post declined to comment on the Carlson-NSA matter when asked by The Daily Signal.

The two news organizations had complained about reports that the Justice Department, during the Trump administration, tried to obtain records of their communications as part of leak investigations.

When asked about the Carlson-NSA matter by The Daily Signal, a New York Times spokesperson answered only indirectly.

“As a general matter, we are very concerned about government surveillance of journalists,” the spokesperson said, “which is why we have urged the Biden administration to work with Congress to pass a federal shield law to make permanent the DOJ’s new policy, which largely bars federal prosecutors from subpoenaing news media records or testimony.”