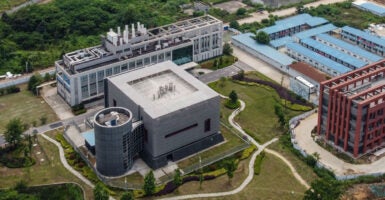 The coronavirus that causes COVID-19 entered the human population in a leak from China’s Wuhan Institute of Virology by mid-September 2019, according to a new report from Republican members of the House Foreign Affairs Committee.

“[W]e now believe it’s time to completely dismiss the wet market as the source of the outbreak,” says the report, released Sunday. “We also believe the preponderance of the evidence proves the virus did leak from the WIV and that it did so sometime before September 12, 2019.”

The Republican lawmakers’ report also says there was “ample proof” showing that the virus that causes COVID-19 could have been genetically manipulated prior to the outbreak.

Evidence cited as proof that a Wuhan lab is connected to the virus outbreak includes:

—The sudden and unexplained removal of a virus database the evening of Sept. 12, 2019.

—Athletes at the Military World Games in Wuhan in October 2019 contracting COVID-like symptoms upon returning to their home countries.

—Installation of a bioweapons expert from China’s People’s Liberation Army to lead Wuhan Institute of Virology’s Biosafety Level 4 lab as early as late 2019.

In addition, the report reveals that multiple Chinese medical officials had expressed concerns about safety protocols at the Wuhan Institute of Virology before the outbreak in 2019. The facility had requested bids for renovation to its waste management system for the Wuhan National Biosafety Lab in March 2019, just two years after the lab had begun operations.

Such a significant renovation so soon after the facility began operation appears unusual. The references to maintenance at the BSL-3 and animal center at the [Wuhan National Biosafety Lab], the procurement of an environmental air disinfection system, and renovations to the hazardous waste treatment system and central air conditioning system all raise questions about how well these systems were functioning prior to the outbreak of COVID-19.

Rep. Michael McCaul of Texas, the lead Republican on the House Foreign Affairs Committee, urged House Democrats in a written statement accompanying the report to subpoena EcoHealth Alliance President Peter Daszak, who collaborated closely with the Wuhan Institute of Virology prior to the pandemic.

McCaul said Daszak should answer questions regarding his “inconsistent—and in some instances outright and knowingly accurate—statements” on the nature of his work in China.

“We know gain-of-function research was happening at the WIV and we know it was being done in unsafe conditions,” McCaul said, adding:

We also now know the head of the Chinese CDC and the director of the WIV’s BSL-4 lab publicly expressed concerns about safety at [Chinese government] labs in the summer of 2019. …

It is our belief the virus leaked sometime in late August or early September 2019. When they realized what happened, Chinese Communist Party officials and scientists at the WIV began frantically covering up the leak, including taking their virus database offline in the middle of the night and requesting more than $1 million for additional security.

The report Sunday was an addendum to a report released in September by Republicans’ China Task Force that detailed how the Chinese Communist Party and the World Health Organization covered up the initial epidemic in Wuhan. The actions, it said, turned “what could have been a local outbreak into a global pandemic.”