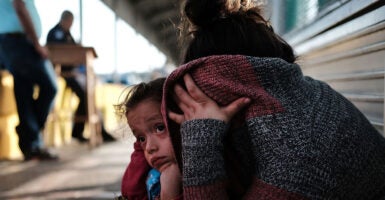 “I don’t have time for this s--t,” a manager said when asked about using government credit cards to buy underwear and other clothing for migrant children, one whistleblower alleges. Pictured: A Honduran mother and her child wait along the border bridge after being denied entry from Mexico into the U.S. on June 25, 2018, in Brownsville, Texas. (Photo: Spencer Platt/Getty Images)

Federal officials ignored requests to buy underwear for migrant children detained at the Fort Bliss emergency intake site near El Paso, Texas, according to a whistleblower complaint filed by the Government Accountability Project.

Two whistleblowers reported gross mismanagement of the Fort Bliss facility and harm to unaccompanied migrant minors. The whistleblowers, Arthur Pearlstein, an official at the Federal Mediation and Conciliation Service, and Lauren Reinhold, an attorney-adviser at the Social Security Administration, served as volunteer “detailees” at the facility from April to June.

Detailees suggested using federal government credit cards to purchase supplies since they could be reimbursed for the cost, but said the idea was shot down by a senior federal manager.

“I don’t have time for this s–t,” the manager said when approached about using the credit cards to buy underwear and other clothing for the children at a Walmart or Costco in El Paso, Pearlstein said. Management officials never explained the incident.

Contractors repeatedly told the detailees they didn’t have enough underwear for the young illegal immigrants because shipments hadn’t come in, according to the whistleblowers’ complaint. Officials at the facility were “well aware” of the shortage of underwear, socks, and shoes, the complaint says.

“The problem persisted for weeks and months,” the whistleblowers said. “Countless children reported these shortages to detailees. Boys said they had no underwear at all, while most simply had only one pair with nothing to change into.”

The Fort Bliss facility held up to 1,200 unaccompanied border-crossing children in “airplane hangar-sized” tents with between 500 and 1,000 kids housed in each of 10 tents in May and June, according to the complaint. Overcrowding led to an accumulation of dirty laundry and trash inside the tents, it says.

“I’ve been into one [tent], one time, and I was like, yeah, I’m not going back there,” an unnamed Chenega senior manager said, according to the complaint. “They’re filthy. They’re dirty. There’s food on the floor. There’s wet spots all over the place. The beds are dirty.”

Chenega Corp. is an Alaska-based company that contracts with the federal government to manage the tents and provide mental health care services for the illegal immigrants, according to the complaint.

Riots occurred in some tents for migrant boys in May, but the detailees weren’t trained in how to respond to such instances and officials never briefed them on what happened, according to the whistleblowers.

Hundreds of the children reportedly tested positive for COVID-19, and several federal employees contracted the coronavirus, according to the complaint. The kids weren’t given enough masks, it says, and employees didn’t enforce their use:

Every effort was made to downplay the degree of COVID infection at the site, and the size of the outbreak was deliberately kept under wraps. A senior U.S. Public Health Service manager was asked and refused to say how many were infected because ‘if that graph [of infections] is going to The Washington Post every day, it’s the only thing we’ll be dealing with and politics will take over, perception will take over, and we’re about reality, not perception.’

The manager would say only that several children were hospitalized with the virus, the whistleblowers say.

Facility managers “resisted” detailees when they tried to report an incident in which construction workers “lewdly and loudly” gawked at migrant girls walking between tents outside, according to the complaint.

The children constantly were worried for their safety and reported feeling anxious about their immigration cases, the whistleblowers say, adding that many experienced depression and several were placed on suicide watch.

The whistleblowers reported significant “waste, fraud, and abuse” to federal managers, who blamed the private contractors running the Fort Bliss facility, according to the complaint.

Detailee complaints were “met with dismissal or retribution,” the whistleblowers say, and they were seriously concerned for the children when they left Fort Bliss.

The Department of Health and Human Services, the agency responsible for overseeing Fort Bliss, did not respond to The Daily Caller News Foundation’s request for comment.